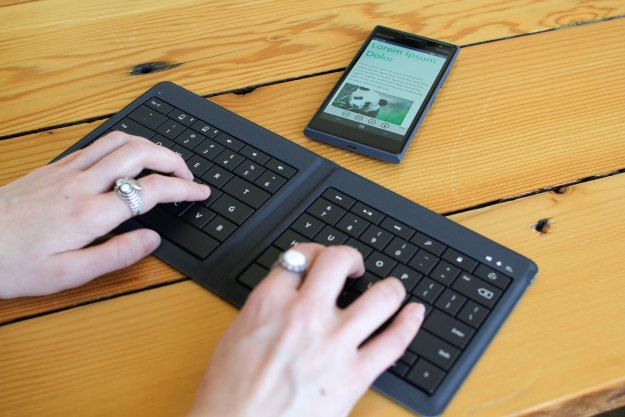 “Microsoft’s Universal Foldable Keyboard is well-constructed, compact, and covered by a three-year warranty.”

There’s no shortage of mobile keyboards in the world. Some, such as EC Technology’s Bluetooth Ultra-Slim Keyboard and the Jorno Keyboard, fold in thirds. Others, including VisionTek’s Waterproof Bluetooth Mini Keyboard and today’s review unit, Microsoft’s Universal Foldable Keyboard, fold in half. Nearly all are water resistant to some degree, and most of them support all three of the standard tablet and smartphone operating systems: Android, iOS, and Windows.

Akin to its Surface 3 and Surface 3 Pro Type Cover keyboard sibling, Microsoft’s mobile keyboard is light, compact, and easy to use. And like most Microsoft keyboards (and other peripherals), it’s well-designed and well-built, if somewhat expensive. If you shop around, you can find it for around $70. You can pick up the VisionTek model for as little as $20, though, and the iClever BK03 Ultra Slim Mini Bluetooth Keyboard, yet another competitor, sells for about $36. At nearly two-thirds of a C-note, do you get what you pay for?

At 4.9 inches from top to bottom by 4.9 inches across when folded (11.6 inches unfolded), and just under half an inch thick, the Universal Foldable Keyboard is about the size of a CD jewel case. Unfolded, it has a quarter-inch profile. It’s a bit larger than its close competitor (price- and quality-wise), the $100 Jorno Keyboard (3.5 by 9.9 inches). At just over six ounces, both devices weigh about the same, but the Jorno model comes with a carrying case that doubles as a stand for holding your mobile device upright while you type.

Microsoft’s keyboard is encased in a plush, soft gray pleather that looks and feels elegant and appears to be fingerprint and scratch resistant. As mentioned, like most of its competitors, its water resistant, so a splash shouldn’t harm it. A magnet holds the two halves closed, so that they don’t flop open and closed in transit, and you charge it via the included microUSB cable. The jack on the keyboard is the standard size used to charge most Android phones and several other microUSB devices. Overall, the Universal Foldable Keyboard is nice to look at, and despite its petite size and light weight, it feels durable, too.

Like several other mobile keyboards, opening the Universal Folding Keyboard turns it on, as indicated by a small LED in the upper-left corner. On the opposite corner are three other status LEDs that indicate the current operating system (OS) configuration, and you can easily switch between each OS by pressing a function key directly below the LEDs.

Microsoft’s keyboard is encased in a plush, soft gray pleather that looks and feels elegant.

Depending on the selected OS, the keyboard function keys (and several other keys) assume the appropriate roles. When switching from Windows to iOS, for instance, the Alt key becomes the Option key. The Windows key assumes the Home key role in Android, and so on.

The Universal Folding Keyboard holds configuration info for two separate Bluetooth devices. You pair it with your mobile devices and switch back and forth between them with the first two function keys. Pairing itself is straightforward in that you hold one of the Bluetooth keys until the mobile device finds it, and displays a code. Typing that code on the keyboard completes the process. Pairing worked flawlessly the first time.

If you’re used to a comfortable, full-size ergonomic keyboard with wrist support, with this and other mobile keyboards, they’ll be some adjustment time while you get use to this small, flat input device. The space in the center where it folds is particularly distracting, as are the two spacebars (one on each side of the fold) and the oversized T, N, G, H, and 7 keys. If you’re a speed typist (or even if you’re not), count on the Universal Foldable Keyboard slowing you down.

That said, despite its size and other limitations, the chicklet styled keys travel comfortably with enough plunge, given the keyboard’s low profile. It’s much like typing on a Surface or another small keyboard attached to a combination laptop/tablet PC — too small if you were weaned on a full-size keyboard, but much easier than thumb typing, especially for writing lengthy emails.

Charge and forget about it

As mentioned, you can charge the Universal Foldable Keyboard with just about any microUSB cable. Not that you’ll be charging it often; Microsoft says that a full charge will last three months. We used it extensively (right out of the box without charging) for more than a week, including to type this review, without plugging it in. It doesn’t come with an AC power adaptor, but you can safely charge it from a USB port on a PC or Mac, or from your tablet or smartphone adaptor.

The Microsoft Universal Foldable Mouse comes with a three-year limited warranty against failure under normal use.

The Microsoft Universal Foldable Keyboard is an excellent choice for folks that do (or want to do) a lot of composing on their smartphone or tablet. We think it would be slicker if Microsoft also provided a carrying case that seconded as a stand for holding your mobile device upright. Overall, though, we found the Universal Foldable Keyboard a highly useful, well-designed product.

The Microsoft Universal Foldable Mouse is light, compact, easy to use, well-built, and it has an elegant look and feel. We were especially impressed with how well the magnet holding the two halves together has just the right strength to make it easy to open and close, as well as keep it from flopping open. And it’s easy to connect to and to switch back and forth between your mobile devices.

During our review we found several mobile Bluetooth keyboards ranging from the cheap and not-very-well-built, to those comparable to Microsoft’s somewhat costly solution. One of the closer in price and features is the Jorno Keyboard that, as mentioned, comes with a carrying case that seconds as a stand for holding your smartphone or tablet upright.

By offering it with a three-year warranty, Microsoft obviously has faith in this keyboard, and it certainly feels rugged enough to last for quite some time. It doesn’t require software, so there’s nothing to update in the future. As long as you take good care of it, the Universal Folding Keyboard should last over the long hall. And hey, if it stops working in the first three years, Microsoft will replace it.

Not everybody needs a keyboard for their mobile device. If all you type is short text messages, thumbing it may be preferable to getting out the keyboard each time you need to type a few words. If, however, you compose longer emails or Word documents frequently, the Microsoft Universal Folding Keyboard, once you get used to it, should save you some time and aggravation—especially if thumb typing isn’t your strong suit.