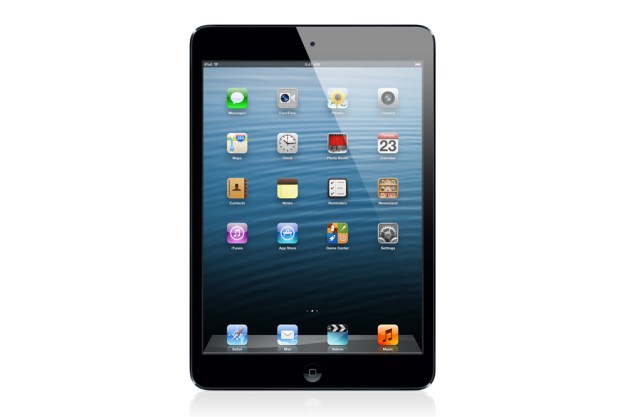 “If you’re spoiled like us and are already used to high-resolution screens on your new gadgets, the iPad mini may be a let down, initially. But if you disarm your screen snobbery and relax, you’ll find an incredibly comfortable, well-sized, well-built tablet at a more affordable $330 price.”

Let’s face it: Right now, the iPad is synonymous with “tablet.” There are dozens of other Android and Windows 8 tablets on the market, but by and large, when people think about a tablet or desire a tablet, what they really want is an iPad. And if they don’t want an iPad, they want something just like it, but without an Apple logo. At $500, the iPad created and has dominated the touch tablet market for more than two years. Until now, Apple has shown zero interest in creating a smaller tablet, going so far as to ridicule them publicly when the first Galaxy Tab hit shelves. However, with 7-inch tablets like the Nook Tablet, Kindle Fire, and Nexus 7 taking off at lower and lower prices, Apple was left out in the cold on a hot segment. Enter the iPad mini. It costs more than the competition, but it’s larger too. Is it worth your time? Read on to find out.

Apple made a smart decision choosing a 7.9-inch screen, which makes the iPad mini noticeably more portable than the full-size, 9.7-inch iPad. Other tablet manufacturers like Samsung have been dancing around the 8-inch screen size a little, but the most popular sizes for Android tablets are 10.1 inches, and 7 inches. Having used all sizes, we would subjectively argue that 7-inch tablets are too small and 10.1-inch tablets are too large, especially with the widescreen format that Android uses.

The iPad mini’s screen is wider and taller than your traditional 7-inch tablet, and the added screen space does wonders. It’s small enough that it can fit in most purses or bags, but large enough that you can use every standard iPad app without difficulty.

Handling the iPad mini is pleasant. We ordered the black version (it also comes in white), which has a “slate” finish on the aluminum case and a sharp edge where it meets the screen like the iPhone 5. The thinner bezel on the left and right sides also hints at iPhone inspiration. However, the thinner sides serve an important purpose. Though it has a wider screen than most 7-inch tablets, the iPad mini can still be held in one hand, edge to edge. And because it weighs only .68lbs (308 grams), it’s comfortable to hold with one hand, too.

Not everything about the mini feels like an ode to the iPhone, though. Like the larger iPad, the mini has a rounded back. The Power and Volume buttons are in the upper right, as you’d expect, and the Home button is right there on the bottom, like every iOS device before it.

Under the Home button you’ll find two speakers surrounding a new Lightning charging connector. Like the new iPhone, this tablet is not compatible with Apple’s famous 30-pin connector that has served iPods, iPhones, and iPads for more than a decade. You’ll have to buy an adapter ($30) if you want to use any of your old accessories. As for the speakers, they are acceptable, but do not get nearly as loud as the iPad’s speaker. They sound ever so slightly clearer than the Google Nexus 7 (a runner up to the iPad), and can attain about the same max volume. In other words, this isn’t going to fill a room with sound, probably not even your bathroom, if the shower is running.

The number one complaint that users and critics will lob against the mini is its lack of a high-resolution, or ‘Retina,’ screen. It is puzzling why Apple didn’t include a Retina screen, and the first thing we noticed was how it just didn’t look as good as the larger iPad. However, this is a tough argument to make. Why would anyone with a full-size iPad want to also buy an iPad mini? And if someone is that hardcore on Apple, will it matter that the mini doesn’t have a high-res screen? For anyone who doesn’t own an iPad 3 or higher, the iPad mini’s screen will look just fine. Yes, you can see some pixels, but 1024 x 768 (or its widescreen 1280 x 720 equivalent as seen on the Nexus 7) is an acceptable resolution for a small tablet. Is it super gorgeous? No. Is it competitive? Yes.

Much like how the original iPad didn’t come with a camera, it’s also good for business to withhold innovations. By not including a high-res screen, Apple can roll out an iPad mini with Retina in 6 to 12 months and sell millions more units and exceed sales estimates again, which it will do. Is that fun for us? No. Will it hurt Apple? Probably not.

Apple is the king of hardware design right now, and the iPad mini doesn’t change that, Retina screen or not.

We can argue about screen resolutions and sizes all day, but the key to the iPad mini’s value lies in iOS and its app ecosystem. The mini runs the exact same version of iOS that larger iPads run, and has the same screen resolution as an iPad 2. This makes it 100 percent compatible with every app and game available for the iPad. While competitors like Android and Windows 8 only have a few thousand (maybe less) top-notch tablet apps, the mini has about 300,000 tailor-made apps out of the box. Most of these are fart apps and stupid junk, sure, but it has more quality applications than any other tablet platform, by far. In the smartphone market, operating systems like Android and Windows Phone finally have competitive app ecosystems. In the tablet market, this just isn’t the case. Not yet. Right now, Apple has a lock on good tablet apps (especially for productivity) and that lead may last a while.

iOS itself runs identically to every other iPad, iPhone, or iPod Touch on the market. Apple does need to upgrade the look and feel of iOS, as it’s starting to get stale, but if you’ve used other portable Apple products, this is no different. The only issue we do have is some of the menu buttons can feel slightly small due to the shrunken screen. The 9.7-inch iPad already tests the limits on how small you can make links and buttons, but on the iPad mini, you may feel like some menus are cramped. It’s not a terrible inconvenience, but, like the lack of a Retina screen, it is noticeable.

On the inside, the iPad mini looks a lot like an iPad 2. It runs on a dual-core Apple A5 chip (an ARM processor), has 512MB of RAM, comes with 16GB, 32GB or 64GB of internal file storage, has a 5-megapixel rear camera, a 1.2-megapixel front camera, 4G LTE connectivity (if you want to pay extra for it), Wi-Fi connectivity (dual-band), Bluetooth 4.0, and the other usual bells and whistles. Many will be disappointed with the new Lightning connector, lack of microSD support, and lack of Micro USB, but these are not new problems. Apple loves selling adapters for premium prices. If you want support for SD, you’ll have to shell out for it.

The new 5-megapixel iSight camera on the iPad mini appears to be the same as the one on the iPad 3, and is the best we’ve used on a tablet. Granted, that isn’t saying much because most tablet cameras are terrible, but perhaps this will mean more: The new iPad’s rear camera appears to take slightly better photos and video than the iPhone 4S, but not quite as good as the iPhone 5, both of which feature the best cameras we’ve seen in the mobile market. The iPad mini produces images with a bit more clarity and slightly better color correction than the 4S. Unfortunately, there isn’t a LED flash on the tablet, giving the iPhone an advantage there.

The front camera is nicer than the third iPad, featuring a 1.2-megapixel ‘FaceTime HD’ lens. This resolution is good enough for decent Web chats.

Apple claims that the iPad mini gets the same 10-hour battery life that its other iPads get, and during our initial testing, this appears true. The mini achieves better battery life than many smaller tablets, but doesn’t stand out in any significant way. The battery life is good enough to last you all day. And like other iOS devices, the mini holds a charge well while idling. You can let it sit for a week or two and come back to it with just about the same charge you left it at. That’s impressive.

If you’re spoiled like us and are already used to high-resolution screens on your new gadgets, the iPad mini may be a let down, initially. But if you disarm your screen snobbery and relax, you’ll find an incredibly comfortable, well-sized, well-built tablet at a more affordable $330 price. Apple hasn’t matched the $200 price of the Google Nexus 7, but the extra $130 is currently worth it to tap into Apple’s robust app ecosystem. Things may change, but right now, if you want a portable tablet, the iPad mini is one of your best options.