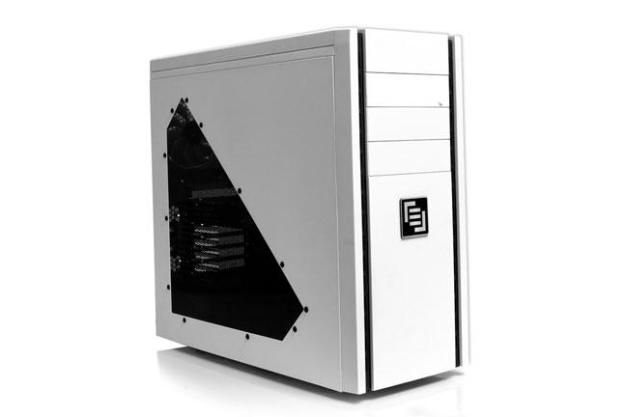 “The Vybe is not a hands-down winner, but in light of this competition, it looks to be a reasonable choice for those who prefer practicality and well-rounded performance.”

Typically, when we receive a desktop PC from a boutique manufacturer, we receive a high-end system that is absurdly powerful and absurdly expensive. And hey, that’s understandable – those sorts of computers are their specialty. It’s their edge, the unique quality that separates a small custom shop from a behemoth like Dell or Acer.

Yet it is still nice to try out a more reasonably priced configuration from time to time. Here we’ve been given that chance by Maingear, which has provided us with a Vybe Super Stock for review. These system is the company’s entry-level desktop, and the configuration provided to us isn’t even the most powerful possible.

That’s not to say it’s a runt. Our review unit still packs a Core i7-2600K processor along with 8GB of RAM, two GeForce 560 Ti video cards running in SLI and one terabyte of hard drive space. There’s also a 20GB SSD included (for use with Intel Smart Response). This is an impressive array of hardware, and it will run you about $2,100 according to Maingear’s site.

Compared to the hyped-up tri-SLI systems we usually test, however, this Vybe is downright affordable. Let’s see if is still up to the task of playing high-resolution games and slamming CPU benchmarks.

The Vybe chassis can be had in black, but our review unit came with the more unique white exterior. White seems to be coming in to style among desktop PC cases, and there are several on the market that offer different renditions of the theme.

Color aside, this enclosure is simple. It has boxy dimensions with fans at the front, rear and top. The front and rear fans are covered with perforated metal. There’s no front case door, and though there is a case window, it’s triangular and smoked, limiting your view. If you want your PC to be distinctive visually, you’d better order the white, as there’s otherwise little to set the Vybe apart.

The situation becomes better when you start to explore this PC with your fingertips. Textures have been put to good use. Much of the top and front has been given a soft-touch coating which provides this simple case a premium feel.

Opening the case only requires the removal of two thumb screws, after which the side panel slides off. Inside, the layout is functional. Because this is a smaller case, the working space is cramped in comparison to larger and more expensive options, but there’s also less hardware installed. Plenty of room is available for new hard drives. Room for additional expansion cards seems limited to a single PCIe 1x slot located above the twin 560 Ti video cards.

The small size of this case can be a boon for hardware gurus in subtle ways that make up for the smaller available space. Unlike the monolithic Maingear Shift and its competitors from other boutiques, the Vybe is extremely easy to carry around or rotate. There’s also little confusion about wire routing, and no concern about wire length inside the case. Everything should connect easily and quickly, and everything is located in the same desktop compartment. Frankly, this kind of case is better for your average enthusiast than a titanic enclosure that requires training in proper weight-lifting technique before you attempt to move it.

Connectivity at the front is robust thanks to three USB ports and individual headphone and microphone jacks. Around back you’ll find a plethora of options including two USB 3.0 and eight more USB 2.0 ports. The video cards can connect via DVI or mini-HDMI.

The front also features our only minor gripe about the enclosure: The LEDs used for power and hard-drive activity. They’re extremely bright and annoying in a dark room. You can disconnect them – but that defeats the point of having them at all.

Our Vybe cam with a plastic binder that included a Maingear t-shirt, a few spare adapters, several install discs (including the operating system), a code for a free copy of Batman: Arkham City and a quick-start guide. Notably missing was a sheet describing the system and any quality control tests that might have been conducted to ensure its operation. We’re accustomed to seeing such a piece of paper included, if for no other reason than to give the boutique a chance to brag about how its system handled benchmarks and stress tests.

No software was pre-installed on our review unit. Zip, zero, nada. The only obvious alteration was the Maingear brand wallpaper installed on the desktop. As a result of this – and the system’s quick hardware – boot times were swift and Windows felt responsive shortly after the desktop appeared.

To see just what you receive if you purchase a more affordable system, we put the Vybe through our standard array of benchmarks.

SiSoft Sandra’s Processor Arithmetic test returned a combined score of 123.58 GOPS. That’s just a hair better than the score of 123.13 we extracted from a Falcon Northwest Fragbox late last year. In 7-Zip, we recorded a score of 25,560 MIPS, which again is just a bit higher than the Fragbox – it scored 24,916.

Running PCMark 7 resulted in a combined score of 5,471. Here, the Vybe falls slightly behind the Fragbox, but this score is still rock-solid. The Origin Genesis, our PCMark 7 record holder, scored 6,166 – just 695 points more than the Vybe.

Synthetic 3D game performance was tested with 3DMark 11, and the Vybe impressed with a score of 8,347. This absolutely creams the score of the Fragbox we tested last year, which was powered by a pair of GTX 570s in SLI. On the other hand, it’s well short of the score of 14,616 we squeezed from the tri-SLI GTX -580-powered Origin Genesis.

Don’t let that fool you into thinking the Vybe can’t handle games, however. At 1080p the Vybe was able to play Star Wars: The Old Republic with all details set to high at a steady 60 frames-per-second. Dawn of War 2: Retribution’s benchmark ran at 96 FPS with Ultra settings, and Just Cause 2’s Concrete Jungle benchmark ran at 51 FPS with most settings turned to maximum, SSAO and point-specular lighting excluded.

One extra included with our review unit is a 20GB Intel SSD which works with the Gigabyte motherboard to support Intel Smart Response. This is a technology used by Intel to improve boot times and the load times of frequently used titles. I did notice that the Vybe seemed to boot quickly and loaded games in a snap. However, you have to shell out an additional $99 for the motherboard and SSD combination, which is a decent chunk of change towards the purchase of a larger SSD – if you don’t mind installing it yourself.

Though not large, the Vybe also is not small. It is not physically equivalent to the Fragbox, Falcon Northwest’s portable gaming desktop. This is a normal mid-tower system with a tower case that has plenty of room for fans and airflow.

The Vybe proved reasonably quiet as a result. Though its fans are clearly audible in any room – even over the fan noise of other systems in our testing settings – they’re also less intrusive than the fans on your typical high-end gaming PC. When you’re not playing games, the fans hum along at a pleasant idle, always there but never grating on your nerves.

To test extreme situations we used OCCT and Furmark to try and turn the fan volume up to 11. OCCT raised CPU temperatures to 71 degrees Celsius and not a smidgen higher, but fan noise did not increase thanks to the optional water-cooling solution used on our review unit. Furmark pushed GPU temperatures to 89 degrees Celsius and caused the fans on the pair of cards to kick things up a notch, but overall noise was still well within tolerance. Based on these tests, we think you should have no problem living with the Vybe during a marathon gaming session.

Maingear’s Vybe is a competent system. There is nothing wrong with this desktop. It doesn’t run hot, it’s not loud, and it’s not outlandishly expensive. Enclosure space is adequate and installing new parts should be simple. Overall performance is what you’d expect from a mid-range gaming PC. This is a dream system for the average Joe – something that is extremely quick, but also obtainable.

On the other hand, the Vybe never reaches beyond competency. This is not a visually striking system, and nothing inside it is of particular interest. Performance is strong, but not surprising given the system’s price.

What we have, then, is a pragmatic high-end gaming system. This means pricing is very important. As mentioned, our review unit rings in at about $2,100.

To provide some comparison, we configured an almost identical Falcon Northwest Talon and Origin Genesis on the websites of each company. The Talon was less expensive at about $1950, while the Origin asked we part ways with about $2250.

Which should you choose? We haven’t reviewed the Talon, but from the looks of it, the case design seems to place more of a focus on fashion than function. You’ll probably like it if you want your new desktop to look it was deserving of the wad of cash you spent on it. The Genesis, on the other hand, offers a slightly larger case – but we don’t think that alone is worth the extra cash.

The Vybe is not a hands-down winner, but in light of this competition, it looks to be a reasonable choice for those who prefer practicality and well-rounded performance.