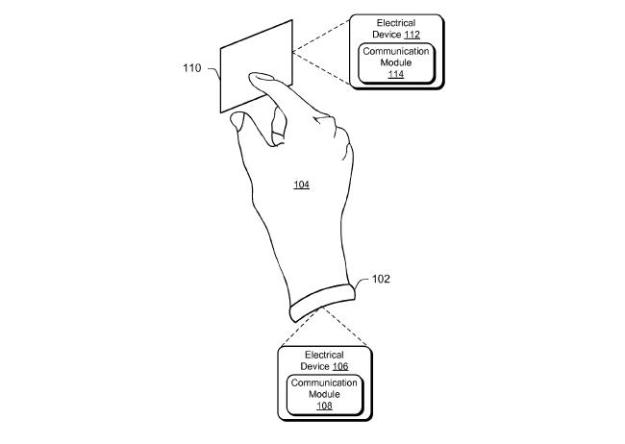 With every tech company from Apple to Google reportedly working on a wearable computer to compete with the Pebble and the Sony smart watch, smart watches are definitely a hot topic on the gadget frontier. We can now add Microsoft to the list as the United States Patent and Trademark Office recently published a patent from Microsoft that sounds a lot like a wearable computer.

To be clear, this Microsoft invention isn’t your average smart watch with different time-telling faces. In fact, the application makes no mention of the device’s ability to tell time at all. The technology, as outlined in its application, is all about making data transferring – from using a credit card, logging into your account, to accessing a building or car – as secure and difficult to hack as possible.

What Microsoft described in its paperwork is an “electrical device” that you can wear on your body (like on your wrist). Alternatively, it can be part of the surface of a mobile device, a wallet, or even jewelery. It then uses the wearer’s body part, like your arm or finger, as a “transmission channel” to transfer data through direct physical contact with another device like a computer, smartphone, or even a game console and controller. The idea is that your body part acts as a conduit for the data to travel through, rather than beaming the information wirelessly, which makes it prone to hacking.

The patent document doesn’t give away what this device will look like, but it does detail the general components it will have. It’s basically a mini-computer with its own processor, operating system, on-board storage, display, audio capabilities, as well as audio/video input and output like a headphone jack and/or HDMI socket. As long as you or a “biological entity” (like your pet, for example) is wearing this device, your pet can open smart pet doors and you could log into your Xbox Live account without having to type your email and password for the umpteenth time. Of course, this mysterious gadget is probably capable of much more than just authenticating its user’s identity, but that’s the special sauce Microsoft is now claiming under this patent.

This pending patent is lending credence to the rumor that Microsoft is working on some sort of smart watch for the Xbox and Surface, as reported by The Verge back in April. Since we didn’t hear Microsoft talk about this wearable device at this year’s E3, we can only assume that it’s still just a prototype and not ready for consumers yet (if ever).

Although we agree with Engadget that at least this technology isn’t as invasive as embedding a chip into your body, it is still hard to wrap our minds around the fact that an electric current (with data) would be could going through your finger and into whatever compatible device you’re touching. While transferring sensitive data through touch could reduce the possibility for someone to intercept our information, it also seems a bit risky to have all your data on-board this little device that you can just as easily lose.

[Updated on June 18 @ 2:45 p.m. PST: This patent has been published but not yet granted by the USPTO, as we initially wrote. Our apologies for the confusion. We’ve updated this post to reflect this change.]