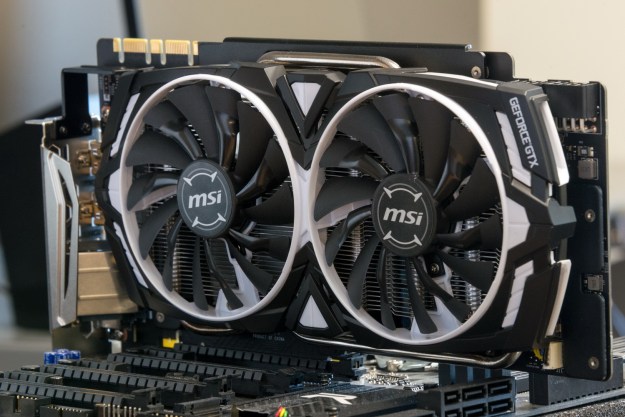 Nvidia’s decision to release the GTX 1080 Ti before AMD releases its Vega-based video cards, expected in the summer, felt like salt in the wound. While the Radeon RX 460 and 480 represent good mid-range value, the red team hasn’t been competitive in high-end gaming for several years. Adding a new card before competition bothered to show up felt excessive.

But, well – isn’t that a strange complaint? Better hardware is always appreciated. Besides, the performance is needed. While the GTX 1080 is fast, it’s not enough to play every modern game at maximum detail and 60 frames per second at 1440p resolution. The story worsens if you have a high-refresh monitor. A GTX 1080 is barely adequate to power a 120Hz display at 1080p.

Thus, we have the GTX 1080 Ti. Its lack of competition means that it wins the performance crown by default, though that doesn’t mean it’s the card you should buy. Value is always important, and the most affordable cards often charge exorbitant rates for minor improvements.

My, what a big card you have

MSI’s GTX 1080 Ti Armor 11G is a fancy name for a card that, ultimately, is not that unusual. It drops the standard design’s single blower fan for a pair of conventional fans that sit directly on top of the card and exhaust heat into the case.

This has the advantage of reducing noise, because the fans are large, and don’t have to spin quickly to move a lot of air. However, the GTX 1080 Ti will blast your other components with hot air. Good case airflow is needed to keep the card from running hot.

Shoving larger fans onto the Armor card has resulted in a beefy card. It’s a massive slab of PCB at approximately five inches wide and 11 inches long. That’s about an inch larger than a GTX 1080 in both dimensions. We had no problem fitting the card into our test rig, but it’s going to give some Micro-ATX cases a hard time, and users can’t rely on the fact a previous flagship Nvidia card fit.

A slight overclock is applied to the card by default. The base clock has risen from 1,480MHz to 1,531MHz, and the Boost Clock is up from 1,582MHz to 1,645Mhz. That’s less than 5 percent more over stock, so low that it’s nothing more than a checkmark MSI’s marketing can add to the card’s feature list. On the other hand, MSI is only charging $10 more than stock.

On balance, MSI’s Armor card is not that exciting, but that’s fine. At $710 it’s essentially the same price as a reference design. The card is best suited for those who have a large case with a lot of cooling, while users with mid-sized cases should stick with a standard GTX 1080 Ti.

It’s almost time to put MSI’s card into the test chamber, but before that, a note about our test rig. We perform our benchmarks on our standard machine. It has a Core i7-6950X processor paired with 16GB of DDR4 memory and an Intel 750 Series solid state drive. As always, the goal of the rig is to get out of the video card’s way, so it has a chance to strut its stuff.

We start our testing with 3DMark Fire Strike. This DirectX 11 benchmark is a reasonably taxing stress of the system’s overall capability. While it’s not a game, 3DMark is popular for a reason. The relative gap between cards in its benchmarks tends to be emulated in other games, overall.

As you might expect, the MSI Armor GTX 1080 Ti performs extremely well, hitting a score above 20,000. It’s the first single-GPU video card we’ve tested to exceed that mark in this benchmark. In fact, the 1080 Ti is not that far behind two GTX 1080 cards. Twin 1080s will set you back about 40 percent more than a single 1080 Ti, but only nets a performance gain just barely above 20 percent.

Based on that, it does appear the GTX 1080 Ti provides reasonable value. Further, the GTX 1080 Ti completely outclasses the GTX 980 Ti and AMD Radeon Fury X, cards that were top-of-the-line last year.

3DMark is a great test, but it’s just one metric. Real-world gaming is what matters. We test using a suite or four games that includes Battlefield 1, For Honor, Civilization VI, and Deus Ex: Mankind Divided. Our suite is chosen to provide examples of a variety of genres and engine techs. We test the first two games in DirectX 11 mode, while the latter two are tested in DirectX 12.

Battlefield 1 in DirectX 11 provides the most appealing jump, as it ramps up performance drastically compared to last generation’s high-end hardware. A GTX 980 Ti can only push 80 frames per second at 1440p and Ultra detail, while the MSI Armor GTX 1080 Ti can hit 141 frames per second. That may seem like overkill, but high-refresh monitors with 120Hz and 144Hz panels are becoming popular among hardcore gaming enthusiast. A last-generation card can’t make the most of those monitors, but the GTX 1080 Ti can.

The story is somewhat similar in For Honor. While the game doesn’t run quite well enough at 1440p and maximum detail to satisfy a 144Hz panel, it comes close to 120Hz panels. Those who want extreme refresh rates should stick to 1080p, where extreme detail hits 150 frames per second on average.

Our DirectX 12 games produce harsher results, though for distinct reasons. Performance in Civilization IV is hardly better than with a GTX 980 Ti or AMD Radeon Fury X, and equal to a GTX 1080 SLI configuration. Upgrading from last-generation hardware would not be recommended if this is your favorite game. Even in DirectX 12 mode, and on our test rig equipped with a Core i7-6950X processor, the game becomes CPU-bound.

Deus Ex: Mankind Divided continues to humble cards with its sheer detail. It’s a gorgeous game, and the MSI Armor GTX 1080 Ti “only” hits 70 frames per second. That’s not enough to power a high-refresh panel. However, it does bump the game above 60 frames per second, while the last-generation cards did no better than 43 FPS. The GTX 1080 Ti will be a noticeable upgrade, even here.

While test results vary from game to game, it’s clear the GTX 1080 Ti is fast enough to provide a dramatic improvement over the last generation at 1440p resolution. It may even be worthwhile if you have a 1080p monitor with a 120Hz refresh rate.

We do not include 4K testing as part of our regular test suite because an incredibly small fraction of gamers have a 4K panel. Further, we think that 4K gaming is an unrealistic target for most PC gamers. We believe gamers prefer high refresh rates and high detail settings in PC games, and test accordingly.

It’s true that the GTX 1080 Ti is the best single video card for gaming at 4K, but that’s a given. It’s the most powerful video card available, so of course it will be the best. We prefer to test at 1080p and 1440p, as we think these resolutions remain the most relevant. And frankly, we’d rather play on a 1440p high-refresh monitor than a 4K 60Hz monitor.

MSI provides a one year warranty against manufacturer defects. That’s typical of video cards at any price point, so there’s no advantage or disadvantage here.

Its performance, of course, is excellent. The GTX 1080 Ti is an incredibly fast card, and an upgrade even if you have a GTX 980 Ti or AMD Radeon Fury X.

The MSI Armor GTX 1080 Ti has plenty of competition from other GTX 1080 Ti variants. The Armor edition is large, and dumps hot air into the case, so it’s only the right pick for certain situations. Its strongest competitor is likely the EVGA GeForce GTX 1080 Ti SC Gaming, which is $720 and includes more attractive lighting. The decision between them, though, may come down to price on the day the card is purchased.

MSI’s Armor GTX 1080 Ti is one of the fastest video cards ever produced, and it’ll last a reasonable time. Generational improvements remain large here, so the GTX 1080 Ti will be obsolete in five years. A lesser card, however, may only last two or three.

Yes. The MSI Armor GTX 1080 Ti is a massive card, but it’s priced at $710, which is hardly more than a stock version of the card. We think this card a good fit for people who want a large, quiet version of the card, and aren’t worried about cooling. Many other custom GTX 1080 Ti designs use a similar cooling solution, but almost all of them are more expensive than MSI’s Armor. And, of course, the underlying GTX 1080 Ti GPU is incredible. Buy it for a high-refresh 1080p or 1440p monitor — you won’t be disappointed.