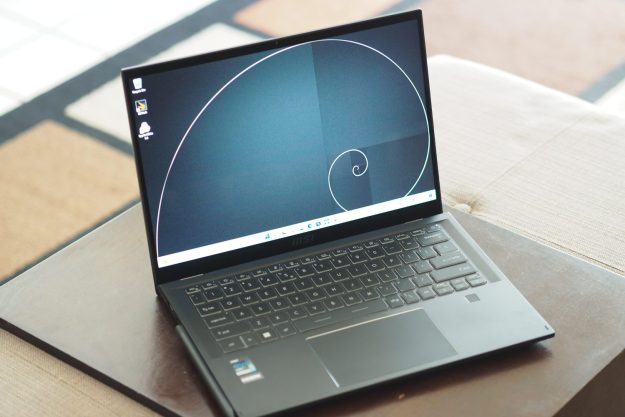 “The MSI Summit E14 Flip lacks the performance and battery life that competitors excel in.”

MSI is best known for its gaming laptops, but it has a line of sharp mainstream laptops as well. The Summit E14 Flip is one of the newest members of that lineup, and it’s a convertible 2-in-1 sporting Intel’s 12th-gen CPU and all the latest components that come with it. However, the 14-inch laptop is a deep class of machines lately, and MSI is going up against several excellent competitors.

MSI makes a lot of the Golden Ratio in discussing its mainstream laptop designs, and apparently, the 16:10 display aspect ratio fits the math perfectly. I don’t see it as anything unique to the Summit E14 Flip, though, which is a nondescript dark black color throughout with zero bling. The rear edge is nicely angled, but otherwise, it’s another minimalist design that seems to be popular lately.

Some previous MSI machines, such as the Summit E13 Flip and the Summit E16 Flip, reminded me of HP’s Spectre line with some rose gold accents and similar angles, but the Summit E14 Flip doesn’t share those characteristics. The Lenovo Yoga 9i Gen 7 is an example of a 14-inch convertible 2-in-1 with a much more stunning aesthetic, thanks to rounded edges and judicious use of chrome accents. Having said all that, I still find the Summit E14 Flip to be an attractive laptop that will fit nicely into professional environments.

Thanks to its small bezels, the Summit E14 Flip is nicely sized.

The Summit E14 Flip is constructed of aluminum, and it demonstrated just a bit of bending in the lid and flexing in the keyboard deck during my testing. The Yoga 9i Gen 7 was more solid, as was the HP Spectre x360 14. The Summit E14 Flip’s hinge allows opening the lid with one hand, and yet, it holds the display in place in all four modes, clamshell, tent, media, and tablet.

Looking more specifically at the benchmarks, we see the MSI coming in behind the other 12th-gen machines in Geekbench 5 in balanced mode but taking first place in performance mode. Our Handbrake test that encodes a 420MB video as H.265 was even more impacted, with the Summit E14 Flip coming in second-to-last among the entire comparison group with a terribly slow score of 152 seconds in balanced mode but again taking the lead at a speedy 94 seconds in performance mode. Cinebench R23 also showed a massive improvement in multi-core performance when switching modes. Note that all the Core i7-1260P laptops demonstrated a significant difference between their balanced and performance settings.

Its performance makes the Summit E14 Flip something of an enigma.

Only the PCMark 10 Complete benchmark, which tests a variety of productivity, multimedia, and creativity tasks, wasn’t affected much by switching modes. In this benchmark, the Summit E14 Flip was second-slowest; it scored 5,154 in performance mode.

That makes the Summit E14 Flip something of an enigma. Its multi-core scores jumped significantly in performance mode, but its single-core scores remained low, and it didn’t do that well in PCMark 10 Complete. None of this means that it’s a slow laptop. It’s still fast enough for demanding productivity workflows even in balanced mode, and turning on performance mode gives it enough power to handle some creative tasks. Perhaps a firmware or other issue is holding back single-core performance that MSI can address.

The thing about the Summit E14 Flip’s performance mode is that the fans spun way up and were quite loud. It wasn’t gaming laptop loud, but it was enough to be distracting. At the same time, the laptop was almost entirely silent in balanced mode, demonstrating how aggressively MSI tuned the machine to avoid fan noise. The laptop would benefit from a slightly louder balanced mode that didn’t compromise as much on performance. CPU temperatures remained surprisingly low in balanced mode as well, hitting a maximum of 71 degrees C when running Cinebench R23. The CPU temperatures were much higher in performance mode, going up to 97 degrees C and causing some throttling.

Given the integrated Intel Iris Xe graphics, the Summit E16 Flip’s gaming performance was as expected. Its 3DMark Time Spy score was in line with the other Core i7-1260P machines and competitive with the updated AMD Radeon graphics in the Ryzen 7 6800U. In Fortnite, the MSI hit 15 frames per second (fps) at 1200p and epic graphics, which increased to 19 fps in performance mode. As usual, given the integrated graphics, this isn’t a gaming laptop.

I used my SpyderX colorimeter to test it more formally, and it performed well. Colors were wide at 100% of sRGB, 89% of AdobeRGB, and 99% of DCI-P3, with excellent accuracy at a DeltaE 1.10 (under 1.0 is indistinguishable to the human eye). The contrast was particularly good at 1,320:1 (we like to see 1,000:1 or better), and brightness was extremely high at 516 nits (300 nits is our baseline). Those results are better than the other IPS displays in our comparison group but not up to the same standards as the OLED displays.

While the most demanding creators would want a wider AdobeRGB gamut, the Summit’s E14 Flip display is excellent for everyone else.

Two downward-firing speakers on the bottom of the chassis push clean sound with clear mids and highs and the usual lack of bass. However, they don’t get very loud; in fact, the Summit E14 Flip was one of the lowest-volume laptops I’ve reviewed in a while. There’s enough sound for watching Netflix or listening to music in a quiet room, but you’ll likely want to use a pair of headphones or external Bluetooth speakers.

The Summit E14 Flip has a typical island keyboard with large keycaps and comfortable key spacing. The switch mechanism is light but precise, with a responsive click when bottoming and a quick return. I liked the keyboard and found it comfortable when writing this review, although it’s not quite up to the standards of the best Windows laptops, such as the Dell XPS and HP Spectre lines.

The touchpad is another story. It’s decently sized and takes up most of the available space on the palm rest, plus it has a smooth and responsive surface with Microsoft Precision touchpad support. Its buttons are harsh, though, with an annoying snap when pressed and inconsistent response. I found myself pressing the buttons multiple times to get a response, and it was a frustrating experience overall.

The display is touch-enabled, of course, and supports MSI’s active pen. I found inking to be as good as with other competitive 2-in-1s using the included pen.

The webcam is Full HD (1,920 x 1,080) — a plus — and MSI’s active noise reduction technology is effective. Video was clear and detailed, even in low light.

There’s an infrared camera for Windows 11 Hello passwordless login via facial recognition, and a fingerprint reader is embedded in the palm rest to the touchpad’s right. Both methods of logging in were fast and reliable.

Of more interest are the security and privacy features, which use a customized digital face scan to blur the display when the user looks away from the laptop and to unblur when the user returns their focus to the display. It can also blur the screen when someone is looking over the user’s shoulder and lock Windows after a user-determined amount of time away. The latter doesn’t automatically unlock the machine when the user returns.

In my testing, these features worked well. They’re almost as good as Lenovo’s version of the same functionality, except in Lenovo’s case, the laptop unlocks when the user is back in front and authenticated via Windows 11 Hello.

There are 72 watt-hours of battery capacity available in the Summit E14 Flip — a significant amount for a 14-inch laptop with an IPS display. The Core i7-1260P hasn’t shown itself to be a highly efficient CPU, so I wasn’t expecting miracles from the MSI. Given its cranked-down performance in balanced mode, I wondered if I’d see at least competitive battery life.

What I got was disappointing. In our web browsing test that cycles through some popular and complex websites, the Summit E14 Flip managed less than 7.5 hours — behind the other Core i7-1260P machines and the Asus ZenBook S 13 OLED with its Ryzen 7 6800U that also didn’t do that well on this test. In our video test that loops a local Full HD Avengers trailer, the MSI hit nine hours exactly, even more disappointing than the web browsing results. We should see closer to 12 hours or more in this test.

I also ran the PCMark 10 Applications battery benchmark, which is the best predictor of productivity battery life. The Summit E14 Flip lasted for just under eight hours, which is, again, less than I like to see. In the PCMark 10 Gaming battery test, the MSI lasted for roughly two hours, which is average and indicates that the machine doesn’t turn down the power while running on battery.

Overall, the Summit E14 Flip exhibited less than average battery life, and it’s questionable whether it will last a full working day on a charge.

The Summit E14 Flip is a well-configured laptop that suffers from inconsistent performance and below-average battery life. Its touchpad is also a weakness, while its display and keyboard are competitive.

The problem is that there are so many good 14-inch laptops available today, and the Summit E14 Flip is already competing against several excellent 2-in-1 laptops. It’s a bit expensive as well, which doesn’t help, and overall, the laptop is hard to recommend.

As of when this review is being written, the Lenovo Yoga 9i Gen 7 is the best 14-inch convertible 2-in-1 that you can buy. It provides excellent performance, an exquisite aesthetic, a solid build, and a superior display. It’s also a bit less expensive than the Summit E14 Flip.

The recently announced HP Spectre x360 13.5 is another convertible 2-in-1 that promises to compete strongly against the MSI. We haven’t reviewed it yet, but it looks to offer a solid combination of performance and efficiency, an elegant design, and the same quality as the rest of the Spectre line.

Apple’s MacBook Pro 14 is my recommendation if you don’t need a 2-in-1. You get the typical excellent MacBook build quality, Apple’s superfast M1 Pro or M1 Max CPU, and superior battery life. Unless you’re committed to Windows 11, the MacBook Pro 14 is a solid, if expensive, alternative.

The Summit E14 Flip has a solid enough build that it should last for years of typical use. It’s also stocked with the latest components, lacking only Thunderbolt 4 support for the utmost in longevity. The standard one-year warranty is disappointing, as usual.

No. There are simply too many other 14-inch laptops that offer more consistent performance and better battery life.