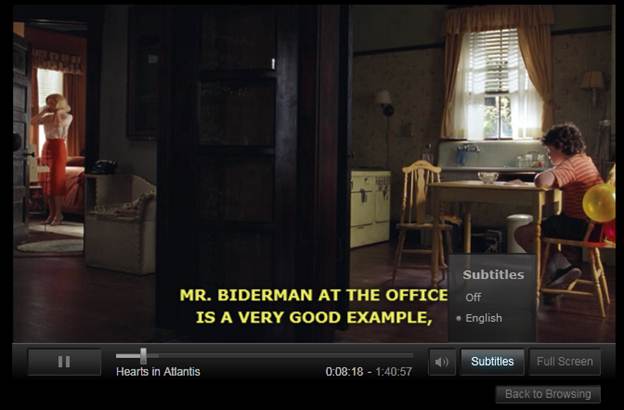 While the majority of Netflix customers probably never noticed the abscence of subtitles, the hearing impaired certainly have. Netflix said this week that nearly a third of its streaming content — about 3,500 titles — is now available to be watched in a subtitled version. That’s an OK start considering that a little over a year ago none of its titles (foreign films with “burned in” subtitles excluded) featured a subtitle option. Netflix says that it plans to have 80 percent of its movies and TV shows subtitle-ready by the end of 2011.

In addition, Netflix has also added a page on its website that lists its subtitled movie and TV show library — a page that was sorely missed prior.  At present, subtitles are offered for PCs, Macs, the Nintendo Wii, Sony’s Playstation 3, the Boxee Box and Google TV. Netflix says it plans to add support for the Xbox 360 and Roku later in the year.

And while many in the deaf and hard of hearing community celebrated Netflix’s announcement, at least one man was not impressed. Mike Chapman, an advocate for subtitles on Netflix, posted his own analysis in the comments section of Netflix’s blog pointing out a glaring inconsistency in Netflix’s subtitling approach: many TV shows counted by Netflix as “subtitled” only are partially subtitled — some with just a single episode.

Come on, Netflix. You’re not doing anyone any favors by having subtitles for a mere two out of twelve episodes of the sixth season of Gangland . You can read Chapman’s analysis of Netflix’s subtitled offerings here. (Note that Chapman appears to count a TV show season as a singular subtitled entry, while Netflix appears to count every single subtitled episode in a series.)