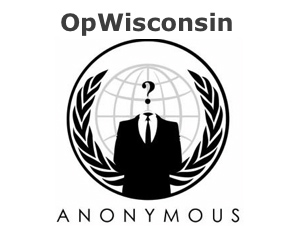 Everyone’s favorite loose-knit group of “hacktivists,” Anonymous, have allegedly launched a new campaign of disruption: Operation Wisconsin. This round, the shadowy cyber-vigilantes plan to take on libertarian billionaires David and Charles Koch, who own Koch Industries, for their support of Wisconsin’s union-busting governor, Scott Walker.

“It has come to our attention that the brothers, David and Charles Koch — the billionaire owners of Koch Industries — have long attempted to usurp American Democracy,” reads a press release posted to Anonymous-affiliated publication AnonNews.org. “Their actions to undermine the legitimate political process in Wisconsin are the final straw. Starting today we fight back.”

Specifically, the release points to the Koch brother’s role in pushing forward a Republican-backed bill in Wisconsin that would effectively “eliminate the collective bargaining power of unions” at state-owned utility plants by allowing Koch Industries to purchase those power plants without oversight, giving the company a “monopoly over the state’s power supplies.”

The Koch brothers’ role in the “grassroots” Tea Party movement are also mentioned as reasons to “fight back.” This includes their creation of organizations like Americans for Prosperity, Club for Growth and Citizens United which, says the release, have been used to “sway voters” using “falsehoods.”

“Anonymous cannot ignore the plight of the citizen-workers of Wisconsin, or the opportunity to fight for the people in America’s broken political system,” says the release. “For these reasons, we feel that the Koch brothers threaten the United States democratic system and, by extension, all freedom-loving individuals everywhere.”

According to the press release, members of Anonymous are “actively seeking vulnerabilities,” presumably of the network and computer variety. Until such vulnerabilities make themselves apparent, says the release, supporters of Operation Wisconsin should boycott all products that fall under the massive Koch Industries umbrella.

So far, Koch Industries’ digital properties appear to be up and running properly, save an intermittent outage of the Americans for Prosperity website late Sunday.

It should be noted, however, that just because a press release claiming to have been written by Anonymous appears on AnonNews — which is open to anyone who wants to publish something — doesn’t mean the group or its members have actually coordinated an attack.

Recently, a similar release was published to AnonNews, which said that Anonymous planned to take on the homophobic religious zealots of Westboro Baptist Church. Anonymous later claimed that the release was actually written by Westboro in an attempt to generate publicity for the church, and that the hacktivists had no plan to attack. (Though they did, eventually, do just that, after Westboro wouldn’t back down their rhetoric.)

Also, an AnonNews post addressed to the media points out that Anonymous is not affiliated with the left wing of American politics, nor does it have any official position on the Tea Party, Republican party or the Democratic party. The only thing Anon does have a position on are “LULZ.”

Anonymous has already successfully taken down the corporate sites of Visa and Master Card, as well as PayPal, after those companies stopped processing donation payments made to anti-secrecy organization WikiLeaks late last year. The group performed similar take-downs of governmental sites in Yemen, Egypt and Tunisia, in order to help protesters in those countries. Most recently, Anonymous obliterated the reputation of cyber-security firm HBGary after executives of that company attempted to infiltrate Anonymous’ ranks. Whether or not their tactics will work against Koch Industries remains to be seen — but you can guarantee we’ll be watching.

As FBI issues 40 search warrants, Anonymous announces it will retaliate for UK arrests