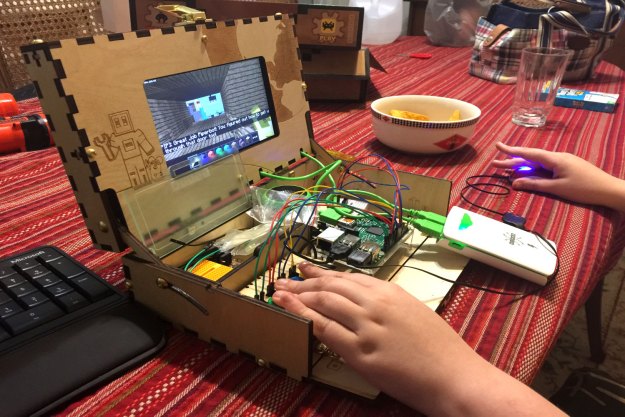 “The Piper Computer Kit is a fantastic, fun gateway into the world of PC hardware and programming.”

Minecraft is an awesome creative tool. It provides a huge sense of satisfaction when building cities, constructing in-game working computers, or discovering how custom artificial intelligence can work within a virtual realm. It’s a tool loved by educators, programmers, and gamers alike, which is undoubtedly why Piper chose Minecraft as the foundation of its do-it-yourself PC construction kit for kids.

The Piper Computer Kit is just as awesome as the Minecraft game itself. It focuses on young students who have a passion for building gadgets, a high interest in creating their own PC, and are big Minecraft players. And given that Minecraft is capable of creating working in-game electronics, it’s the perfect programming tool to keep these little system builders in a controlled environment as they learn about the real thing.

It may be for kids, but parents will love it too

For our hands-on with the Piper Computer Kit, we enlisted 12-year-old Nicholas, who loves to build electronic gadgets in and outside Minecraft. He was charged to unpack the kit, assemble the entire computer, and then demonstrate his understanding of programming switches, buttons, and more, all on his own. To help guide him along this PC-building journey, the author of this specific hands-on, who we’ll call “Dad,” stood by and prevented himself from getting too involved.

The Piper Computer Kit comes with a single, plastic coated sheet of blueprints, the computer’s enclosure that must be pieced together like a puzzle, the Raspberry Pi 3 computer board, a controller box, a miniature mouse with a retractable cord, a USB-based power supply, bags with screws, nuts, hinges, and buttons, a screwdriver, lots and lots of wires, and a round, green stereo speaker.

The Piper Computer Kit features its very own 7-inch LCD display. It’s already assembled, only requiring Nick to piece together the part of the overall PC enclosure that protects the small motherboard controlling the display. This screen has 800 x 480 resolution, which is perfect for playing Minecraft. It’s also likely the bulk of the Piper Computer Kit’s overall price tag.

At the heart of the Piper PC is a Raspberry Pi 3, featuring a quad-core processor clocked at 1.2GHz, 1GB of system memory, 802.11n Wi-Fi, Bluetooth 4.1, one Ethernet port, four USB ports, one HDMI port, a microphone/headphone combo jack, and a MicroSD card slot that plays host to the operating system and programs. The board also has 40 GPIO pins, a camera interface, and a display interface. The entire board is roughly the size of a credit card.

Nick was excited about building a small computer, and even more so when he discovered that the enclosure itself had to be pieced together, too. However, he wasn’t thrilled that the instructions were printed in blue and white, preferring instructions that actually showed the parts in question in full color.

A PC you put together like an expensive puzzle

The Piper PC’s toolbox-sized enclosure comprises of wooden components that are essentially thrown into one big pile in the kit, requiring builders to dig through it all to find the parts they need. However, everything pieced together beautifully, with Nick putting together the controller box rather quickly, followed by the power-ups box that plays host to the miniature mouse and components used for programming.

The Piper Computer Kit is just as awesome as the Minecraft game itself.

To make the construction aspect easier on young builders, each wooden piece associated with a specific compartment of the computer has a number along the edge, so that kids can fit the correct pieces together by matching up the numbers. The larger pieces actually have illustrations of the major computer components drawn on them, such as the base plate featuring printed diagrams of the controller box, the power-ups box, the Raspberry Pi 3 base, and more on its face. This shows the builder what hardware will eventually be installed on that specific wooden piece.

However, this was a little confusing to Nick. When it came time to construct the base plate, he tried to install components too, because the blueprints showed the printed diagrams on the illustrated wooden pieces, as well. Perhaps the blueprints needed to remove the component illustrations from the diagrams of the wooden pieces, as the 2D presentation could be understandably confusing to a child. Thankfully, that’s where Dad stepped in to save the day.

Once construction of the Piper Computer was completed, he wasn’t too sure what to do with it. The Raspberry Pi 3 board was apparently getting power, and the screen flashed blue for a short moment, and then remained black. Moving the mouse didn’t “wake” the system up, either. The community website dedicated to the Piper Computer was also not available, so he had to do some digging into how to boot up the Raspberry Pi 3 board itself – with help from dad.

It’s powered by a Minecraft mod for teaching electronics

Once he pulled and reattached the power cord to the Raspberry Pi 3, the computer suddenly came to life, played an introductory video, and then immediately loaded up PiperCraft, a Minecraft mod. This custom Minecraft “game” throws up a Minecraft-themed Piper interface, offering a Sandbox Mode and a Story Mode. On this screen, Nick also had to configure the device’s Wi-Fi connection. After that was set up, the program began to auto-update on its own.

The Story Mode levels include Mars (learn to program player movement), Cheeseteroid (learn to program jump), Treasure Hunt (program an LED), Chain Reaction (program a switch), Power Plant (program a button), and Rainbow Bridge (program a buzzer). Each of the levels are locked until the player completes the previous one, and once these five are completed, players can then download additional levels from Piper within the custom Minecraft interface.

The first Story Mode chapter, Mars, introduces the Raspberry Pi 3 board, and how to add wires to its GPIO pins. This lesson begins by connecting two red wires and touching them together in order for Nick to move in one direction within the virtual world. Another step required connecting those two wires to the controller box along with a red button, so Nick could mash a button to move instead of goofily holding two wires together. Two more wires and a button were needed for moving left (green), another set for moving right (blue), and another set (yellow) for jumping.

Thankfully, the buttons and wires are color-coded on the screen as well as in the real world. Once a connection is made in the real and virtual realms, the game will congratulate the player for completing the step. However, Nick noticed that he needed to push rather hard on the buttons in order for the game to register his movements.

In another task, Nick had to create a treasure detector by connecting two wires from the Raspberry Pi 3 to the supplied breadboard, and inserting an LED. The closer Nick moved to the virtual treasure, the quicker the LED flashed. Everything was explained in detail within the Minecraft environment so he could move around virtual representations of the Raspberry Pi 3 board and breadboard to get a better up-close-and-personal view. Like before, the wires were color-coded within the game and in the real world.

Plenty of fun, but not plenty of juice

Because the rechargeable USB battery pack powers both the Raspberry Pi 3 and the screen, it didn’t seem to last for very long. The battery pack will actually power the Piper PC while it’s recharging via a wall outlet, but the system may take a few minutes to come back on if the battery’s power is depleted. The battery will show users that it’s receiving a charge by flashing a green LED.

To save battery, users can unplug the local screen’s HDMI connector, and hook the Piper PC to a larger HDTV. Users can also plug a smartphone charger directly into the Raspberry Pi 3 board itself, and then hook it up to an HDTV, bypassing the battery altogether.

But it’s more than just a Minecraft machine

When it boots, the Piper automatically loads the PiperCraft interface. However, kids can exit the Minecraft mod on the main PiperCraft screen by hitting the power button and choosing “Exit to Desktop.” After that, the program closes, and users are given a desktop with a Piper-themed wallpaper and the one PiperCraft shortcut.

Parents will wish this kit was around when they were kids.

The Piper Computer uses the open-source Debian-based Raspbian operating system for the Raspberry Pi board powered by the New Out of Box Software (NOOBS) setup solution. So, not only are kids getting a cool tool to learn the process of building and programming a computer, but they actually have a working, portable PC that can be used to surf the internet, work on documents, and do programming outside Minecraft with tools like Python 2 and Sonic Pi.

As shown here, there are plenty of operating systems that the child can download and install on a microSD card for the Raspberry Pi 3 including Ubuntu Mate, Windows 10 IoT Core, RISC OS, Pinet, and many more. There are many possibilities outside the Minecraft-based teaching structure that should have your young programmer plenty busy for a long time. Also, the Raspberry Pi 3 Model B board itself only costs $35, and the next model will likely cost the same when it’s time to upgrade – which means you may be able to switch boards in the future.

The Piper Computer Kit is an awesome tool for learning how to build, program, and discover new things in the world of computing. The kit is recommended for children ages seven to twelve, branded by a colorful Piper logo that is pieced together on the front during the initial construction. It even provides a Stanford endorsed programming curriculum to help youngsters understand the basics of computing, programming, and electronics in general.

However, as previously pointed out, the bulk of the Piper Computer Kit price likely stems from the included LCD display. This kit costs $300, which could be a drawback for many parents of kids in the younger bracket. And although there’s more to this kit than just the Minecraft aspect, parents simply wanting a computing device for their children would be better off getting a low-end 11-inch laptop for a cheaper price point to play Minecraft on instead.

But that would be missing the point. If you want your kids to learn electronics and programming the fun way while building their own PC, then this kit is definitely a great starting point leading to a highly lucrative career. It’s not fool-proof, but it’s simple enough for a determined kid to handle. And its gradual setup, guided through the world of Minecraft, is as unique as it is engaging. It’s a shame the Piper Computer Kit wasn’t around when Dad was 12!

Best monitor deals for October 2022
The best motherboards for Ryzen 7000 available right now
Image-generating AI Dall-E is now free for anyone to play with
Apple mixed-reality headset: Everything we know about Apple’s VR headset
DLSS 3 could boost your gaming performance by up to 5x
Exciting Meta Quest 3 details leak in full CAD renders
Dell is having a surprise sale on its best business laptops
Best laptop deals: Get a portable workhorse from $119 today
Hurry — save $550 with this limited time Dell XPS 13 laptop deal
Save over $1,000 off a new gaming PC with this Alienware clearance sale
This dangerous hacking tool is now on the loose, and the consequences could be huge
Searches for health topics on YouTube now highlights personal stories
Microsoft Surface October Event: Surface Pro 9 and everything else we expect