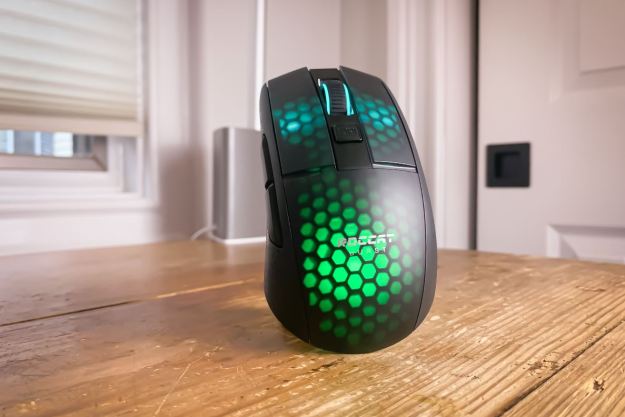 “The Roccat Burst Pro Air is just as fantastic to use as it is to look at.”

Finding the best gaming mouse in 2022 is easier said than done — especially if you’re looking beyond the Razer and Logitech options that seem to top the charts consistently. However, Roccat has skated in to deliver one of the brightest new mice this year, the Burst Pro Air.

The new Roccat Burst Pro Air’s name may be deceiving given its weight of 81 grams, but the internals make up for it. The Burst Pro Air features a DPI of 19,000, wireless connectivity via 2.4GHz or Bluetooth, 100-hour battery life, a water- and-dust resistant shell, optical switches, a detachable Phantom Flex cable, and heat-treated PTFE feet. For $100, that’s a lot of mouse.

When I received the Roccat Burst Pro Air, the first thing that stood out to me was its semitranslucent design, which shines bright on the black or white version. The Pro Air features a “bionic shell” that diffuses the RGB while sealing the mouse tight enough to keep water and dust out. Having RGB on a mouse is typlically pointless since your hand covers it during use, but this isn’t necessarily the case here.

The mouse has four RGB zones, one under the top shell, one each on the left and right buttons, and the last in between, which illuminates the scroll wheel. I hold my mouse with a palm grip, and the RGB lights under the buttons were still able to shine from underneath my fingers. It’s very neat, especially compared to some mice that hide their flashy lights under your palm, such as the Alienware Tri-Mode Wireless gaming mouse.

The RGB on the left and right mouse buttons shine from underneath my fingers.

While I opted to use the 2.4GHz mode, the included Phantom Flex cable is without a doubt the best USB-C cable I have ever received with any peripheral. The Phantom Flex cable is braided with Roccat’s fancy paracord, which has just enough weight and flexibility to prevent the mouse from snagging on your desk without being too heavy.

Roccat could have just slapped on some standard PTFE feet like some other companies, which would’ve done the job, but it did not. Instead, Roccat included heat-treated PTFE feet that feel broken in. I did a glide test on my NovelKeys desk mat to see how the Bust Pro Air would do against my Logitech G Pro Wireless with Hyperglide skates, and the results were practically the same. So, the Burst Pro Air skates are good to go right out of the box, which says a lot about the skates on the bottom since it’s not the lightest at 81 grams.

On the left side of the mouse are the usual forward and back buttons, however, these are larger than usual. To be honest, I didn’t realize how large the side buttons were on this mouse until I took a deeper look into its design.

There’s a lot to the Roccat Burst Pro Air if we’re talking internals, so let’s get started.

The switches inside of the Burst Pro Air are TTC Opticals, or as Roccat calls them, “Titan switches.” TTC is a very popular switch manufacturer for mechanical keyboards, and I didn’t even know the company made switches for mice. The process in which the Titan switches operate are like any other optical switch: A beam of light is projected from one side of the switch to the other when actuated, which results in an almost instantaneous response time.

Now, I’ve always found optical switches to be a bit of a placebo in both mice and keyboards. Plenty of people think otherwise, however.

According to Roccat, the Titan optical switches were designed to prevent double-clicking and last up to 100 million clicks. While I haven’t clicked this mouse 100 million times (I don’t think I ever will in my lifetime), TTC is an excellent switch company — so I’ll take Roccat’s word for it.

The switches impressed me, but the sensor did not.

While the switches are optical, they still have some tactility, and the quick response time makes this mouse even more desirable. The scroll wheel feels and actuates like any other notched wheel, but it’s a bit louder than other mice that I’ve tried recently.

The switches impressed me, but the sensor did not. The Burst Pro Air uses Roccat’s Owl-Eye sensor, with a maximum DPI of 19,000 and a polling rate of 1,000Hz.

Over the course of the last year or so, big peripheral companies like Razer, for example, have released mice with extremely high polling rates. This is evident in the Razer Viper 8KHz, which has a polling rate of 8,000Hz and a maximum DPI of 20,000. Did this bother me during use? No, however, the technology of the Owl-Eye is a bit dated, especially for this price point.

While the Burst Pro Air’s sensor falls short in some areas, it does work with Nvidia Reflex, a feature that reduces system latency from each mouse click in GPU-intensive games like Fortnite. However, you can only use Reflex if your monitor features G-Sync, and that’s a bit unfortunate.

The battery life on the Burst Pro Air was really impressive, especially when you factor in how much RGB this mouse has. According to Roccat, the battery life lasts 100 hours whether you decide to use standard Bluetooth or the 2.4GHz wireless dongle. As if the Phantom Flex cable wasn’t good enough, just 10 minutes of charging is all it takes to give you five more hours of gameplay.

One of my friends sent me a screen capture of him playing the original Doom, but with ray tracing, and because Quake RTX was so fun, this had to be as well. Doom was a solid choice when it came to testing this mouse because there’s no auto-aim, it’s very fast-paced, and I hadn’t played it in over a decade.

Overall, the Roccat Burst Pro Air is relatively simple — it doesn’t have too many or too few buttons. If I were to pick any specific games this mouse would be fit for, it’d be something like Overwatch, due to the bright colors and amount of buttons. This is nitpicking, but it would’ve been nice to see a free-spin feature on the scroll wheel, which is starting to appear on more mice. Since I recommended this mouse for one game, I wouldn’t recommend it for something like Dota 2, since the Burst Pro Air lacks macro buttons on the side.

For $100, the Roccat Burst Pro Air falls behind its competition in areas like max DPI, weight ,and polling rates. Nevertheless, I love this mouse. The semitranslucent shell diffuses the RGB beautifully, the switches are made by a reputable company, and the Phantom Flex cable is top-tier.

For $100, there are more than plenty choices, especially if you’re looking for better performance. The Razer Viper 8KHz Ultralight retails for just $60 and has a maximum DPI of 20,000 and a polling rate of 8,000Hz. If you want to stick with Roccat, for $90, there’s the Kone XP, which features the same Titan switches, the Phantom Flex cable, heat-treated PTFE feet, and a scroll wheel that features left and right lateral movement.

The Roccat Burst Pro Air comes with a two-year warranty and between the TTC switches, Phantom Flex cable, and water- and dust-resistant shell, I’m confident this mouse will be operable for years.

Yes, without a doubt. The Roccat Burst Pro Air performs just as well as it looks, and for $100, you cannot go wrong. I wasn’t bothered by its slower polling rate and heavier build, but mouse enthusiasts tend to be very particular, especially when it comes to sensors.

The best lightweight gaming mouse you can buy in 2022
The best Razer keyboards to buy in 2022
The best iMac accessories
Lenovo’s new Legion gaming mice are simple yet affordable
How to use the new communities feature in Microsoft Teams
The best gifts for PC gamers
Google is now supporting my awful browser habits, and I love it
Google just revealed what you found most fascinating in 2022
Even 15-inch portable monitors come in OLED now
How to reset graphics drivers in Windows 11
The most common multi-monitor problems and how to fix them
Upcoming MacBook Pro could have a 20-inch folding display
This Alienware gaming laptop with an RTX 3080 is $650 off today