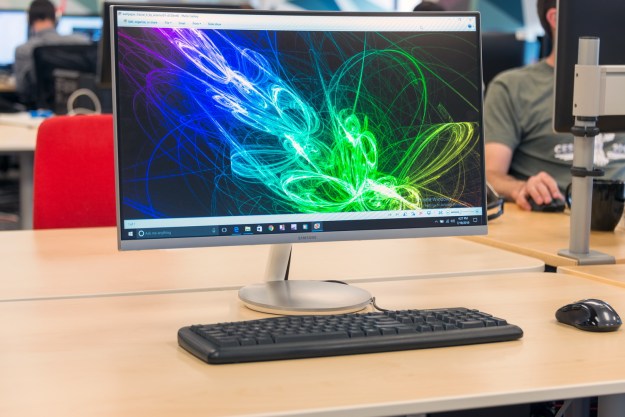 “Samsung’s CF591 27-inch 1080p monitor requires too much compromise for us to recommend.”

With each passing day, 1,920 x 1,080 pixel monitors feel like more and more of a compromise, instead of the standard. As screen sizes expand and refresh rates increase, it’s not hard to make the move from 1080p to 1440p, or even ultrawide, without breaking the bank.

But that hasn’t stopped Samsung from continuing to invest in the resolution. It recently released the CF591, a curved screen with FreeSync support. With a 60Hz refresh rate and four-millisecond response time, the 27-inch display’s specification sheet isn’t anything to write home about.

Its real competition comes from its older siblings. The Samsung SD590C is over a year old now, and it’s almost exactly the same, although it lacks FreeSync. The CF591 is also priced to compete with 1440p panels, which grow cheaper by the day. Has this new Samsung come to market too late to make a splash?

The Samsung is attractive, with a silver bottom bezel that anchors nearly invisible, black bezels on the other three sides, which gives the illusion of stretching closer to the edge of the monitor while turned off. The upper part of the screen feels solid, with no flexible panels or awkward gaps.

Unfortunately, the stand doesn’t hold up to the CF591’s sleek upper half. The round platform at the bottom isn’t quite wide enough, so the screen gently wobbles from side to side as you type. There’s no twist or pivot, either, which is an ergonomic problem. The screen just leans forward and backward in its stand.

The CF591 isn’t VESA compatible, either, so you’re stuck with the limited stand. That’s not uncommon for cheaper displays, like the $200 Philips 276E6. But at almost twice the price, we expect more. It’s not like VESA mounting is a premium feature.

Samsung’s curved 1080p panel is fitted with HDMI, DisplayPort, VGA, and separate audio in/out jacks along the back. That’s a typical selection of ports, and the exact same ports found on the Samsung SD590C. Dell’s curved 1080p, the SE2716H, trades the DisplayPort for a second HDMI, and the Philips opts for DVI only. Thankful that Samsung kept the DisplayPort.

Some monitor manufacturers are fond of buttons, while others go for the touch-sensitive panels. Samsung offers up a third option, the jog button, which is basically a joystick that clicks. The upshot is the jog button is easy enough to use in the dark, or when it’s behind the monitor. There’s no hunting for the right button or turning off the screen by accident. You just find the jog button, and off you go.

The monitor’s budget features wouldn’t be detrimental if Samsung actually slashed the price.

On the other hand, the jog button can be finicky to use. Navigating on-screen display menus can be inconsistent, thanks to an unintuitive scheme and awkward up, down, left and right presses. The on-screen display options run a fairly wide gamut, but are limited by lack of proper specificity. For example, there are color options for RGB on a 0-255 scale, but the presets are “warm 1” or “cool 2” — descriptive, but not exactly precise.

The rest of the picture menu is populated by the standard configurations. Brightness, contrast, and sharpness, plus the color options mentioned above, and options to enable “Game Mode,” which is supposed to reduce response times. Samsung bundles the monitor with a handful of “Magic” features, like “Magic Upscale” and “Magic Bright.” In our experience, these options tend to weaken the image, creating artificial contrast or blowing the gamma out of whack. They seem to exist mostly to check of box on the monitor’s feature list.

Comes up short in image quality

The CF591 isn’t particularly impressive from a technical standpoint. The 1,920 x 1,080 Vertical Alignment panel packs in 82 pixels per inch, with a 60 Hertz refresh rate and four millisecond response time. Apart from its lower-than-average PPI, there’s nothing detrimental about the numbers, but also nothing impressive.

Its 250 nit maximum brightness is acceptable, but the lowest of its curved 1080p competitors. It’s still plenty bright to overcome even our office bullpen lights, though, which is more than we can say for a lot of screens.

With a 910:1 contrast ratio at full brightness, the Samsung certainly takes home a win in that department. It only comes in second to its older brother, Samsung’s own D590C, and by a margin of less than 100. Both screens border on 1000:1, an achievement only the best screens we review can claim.

Color gamut is another high point for the Samsung. The screen renders 99 percent of the sRGB spectrum, tied with the Dell SE2716H after calibration, and 80 percent AdobeRGB, which falls behind the Philips 276E6 with quantum dots. Gamma was high at 2.4, while the other curved 1080p panels had perfect or slightly low gamma.

Color accuracy, though, was downright miserable. At a 6.26 average deltaE, the Samsung is twice as far off as the next panel, which happens to once again be the pre-calibration Samsung D590C. That screen improved noticeably from calibration though, and we’ll hope this new Samsung does the same.

The result is sharply contrasted, if not overly dark, images. High gamma means the grayscale balance is too dark, so black hair and shadows lose definition, blending into backgrounds. Unfortunately, it means a big hit to the overall experience, and one that users are likely to notice in gaming, media, and even viewing pictures. Color accuracy also affects the image, although it’s tougher to tell without a properly calibrated screen right next to the Samsung.

As expected, calibration smooths out the Samsung’s ugliest features. Average color difference in particular drops from 6.26 to just 1.87, putting it within spitting distance of the other curved 1080p panels, including the older Samsung.

Gamma told a similar story. Calibration came down from a noticeably high 2.4, down to an acceptable 2.1. That’s still off the ideal 2.2 rating, but much more acceptable than it was before. This slightly-off reading isn’t uncommon for the category, with both the Dell SE2716H and Samsung D590C sitting at 2.1 as well.

Fixing the color accuracy isn’t immediately noticeable, except in side-by-side comparisons, but correcting the gamma makes a huge difference in terms of viewing experience. The dark spots and lost details come back, and the deep contrast has a chance to shine even more so than before. The downside, then, is the screen needs some love from a calibration tool to reach its full potential.

Premium warranty for a mid-range monitor

The CF591 boasts a three-year warranty on parts and labor. That’s just about the only benefit Samsung has borrowed from its higher-end monitors.

The $350 Samsung CF591 is fighting a steep uphill battle. In an increasingly high-resolution world, we’re finding it harder and harder to recommend 1080p displays. The CF591 doesn’t bring anything new to the table for those screens, and it cuts a lot of the features we’ve grown used to seeing on mid-range monitors.

The budget cuts wouldn’t be as detrimental if they actually resulted in a lower price. The connectivity, stand, and customization limitations are typical of monitors that are much less expensive. That includes Samsung’s own SD590C, which boasts superior contrast, color accuracy, and brightness for $100 less – with a VESA-compatible mounting system. HP’s Z25N is almost the same price, and basically only falls short of the Samsung in response time and contrast, while providing the appreciable jump to 1440p.

If, for whatever reason, you have your heart set on 1080p, there are plenty of options available for a lot less than the CF591. It is not exorbitantly out of range, but its late market entry and slim feature set means you make a lot of compromises without anything to show for it. Unless FreeSync is worth $100 to you, pick a different 1080p option – such as Samsung’s SD590C — or make the move to 1440p.