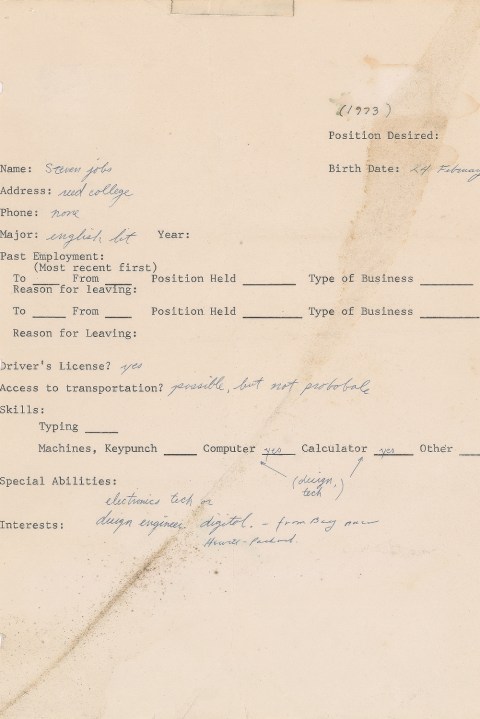 Before co-founding Apple Computer Company in 1976, Steve Jobs was just another guy looking for work. And like countless other hopefuls before and since, he had to complete an 8.5-by-11-inch job application at some point. One of those documents, filled out and signed by an 18-year old Jobs and dated “1973” by another hand, hit the auction block this week and sold for $174,757, including the buyer’s premium.

The winning bidder was an “internet entrepreneur from London who wishes to remain anonymous,” RR Auction, which handled the sale, told Digital Trends. The single sheet of paper had an original estimated sale price of $50,000.

“Steve Jobs and Apple encouraged each of us to ‘Think Different,’ and even today several years after his untimely passing it’s still difficult to think of anyone more iconic, or influential who has had such profound impact on our everyday modern lives,” Bobby Livingston, executive vice president at RR Auction, said. “There are many collectors who have earned disposable income over the last few decades using Apple technology, and we expect similarly strong results on related material in the future as well.”

Around the time of this application, Jobs was a dropout at Reed College in Portland, Oregon, and was auditing courses to save money. This means he was taking classes to expand his knowledge, but he wasn’t receiving grades or credit for the work.

Jobs took classes in Shakespeare, dance, and calligraphy, RR Auction reports. The latter would come full circle in the development of the Macintosh computer.

“If I had never dropped in on that single calligraphy course in college, the Mac would have never had multiple typefaces or proportionally spaced fonts,” Jobs said in a Stanford University commencement speech in 2005.

Jobs filled out his application starting with his full name, “Steven jobs,” and listed “reed college” as his address. He jotted down “english lit” for his major and in the space for a phone number, he wrote “none.”

There is no past employment listed, though Jobs did have a driver’s license and “possible, not probable” access to transportation. In the Skills section, he checked off the Computer and Calculator fields, and wrote “design, tech” underneath them.

For Special Abilities, Jobs wrote “electronics tech or design engineer. digital. — from Bay near Hewitt-Packard [sic].” Though spelling and grammatical errors can spell disaster for an applicant, the ones strewn throughout this document didn’t seem to have hindered the future innovator and billionaire.

There is nothing here to indicate what position Jobs was applying for, but we do know that he started working at Atari in 1974, according to All About Steve Jobs. And the rest is history.

The auction site listed the document as being in “very good condition, with intersecting folds, overall creasing, light staining, and some old clear tape to the top edge.” It is accompanied by letters of authenticity from PSA/DNA and Beckett Authentication Services.

There were a couple more noteworthy sales related to the Apple co-founder. An Apple Mac OS X technical manual signed by Jobs in 2001 sold for $41,806, and a signed newspaper clipping from 2008 featuring an image of Jobs speaking at the Apple Worldwide Developers Conference sold for $26,950. The latter also bears the signature of Tony Fadell, considered by many to be the “father” of the iPod. After departing from the Cupertino company, Fadell co-founded Nest Labs, from which he resigned in 2016.

Jobs would have turned 63 this year on February 24. He died on October 5, 2011 due to complications from pancreatic cancer.

Updated on March 17: Added information on final sale price of job application in addition to other items signed by Steve Jobs.