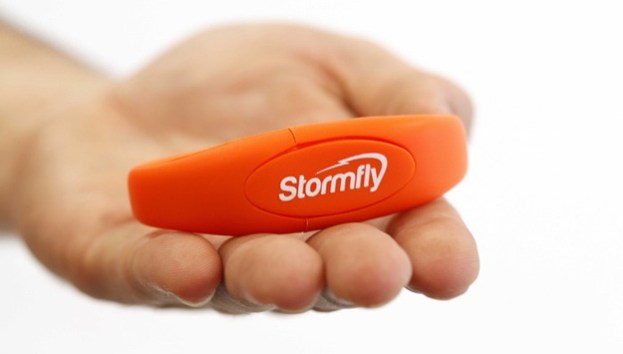 StormFly may sound like an insect species – or to fans of How to Train Your Dragon, a mythical reptile – but it’s actually a new bootable USB device that comes in the form of a bracelet. The makers of StormFly are betting on crowdfunding to raise the $100,000 they need to begin initial production. The device is currently listed on Kickstarter with the tag line “Like a PC On Your Wrist,” and it’s racked up roughly $24,500 as of this writing (with 24 days to go).

Like other bootable USB devices, StormFly isn’t just used for file storage. It comes installed with its own operating system. You can plug it into any 64-bit Mac or PC, and the computer starts up using the OS on the USB instead of the OS installed on the computer itself. That means you can carry not only your files, but also any program you need. In case of emergency – let’s say you need a document for school but forgot it at home, and you need a specific program to open it – you don’t need to install a program on a computer you don’t own since it’s already up and running on your portable OS.

If you want a StormFly of your own in either orange or black, you need to pledge at least $59 on Kickstarter. That amount will also get you three free months of the developers’ backup service, which means the company will send you a new StormFly with a copy of your files and setup if anything happens to your high-tech bracelet.

When the device is available on the market, the optional backup service will cost $20 for a year. The device’s developers hope to bring StormFly’s price point down and promise to also lower the backup service’s cost if that happens. In the future, StormFly could potentially be used by younger children or parents who share the whole family’s computer, schools that can’t afford to provide one computer per student, broke college students, and everyone else concerned about security – including those who want to be able to safely access sensitive data, like bank accounts, anywhere they want.

With Dell’s laptop deals, you can afford a powerful back-to-school laptop

This dangerous Mac malware can infiltrate your entire system