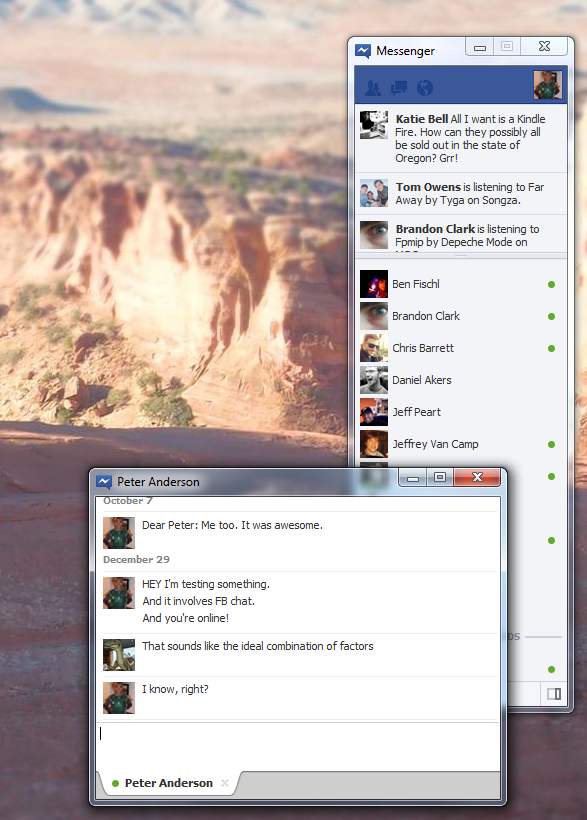 A Facebook desktop application has long-been rumored. We speculated recently about Facebook’s future ambitions, given that the company has taken some of the media content market for itself and is edging in on e-mail. It’s also prompted users to make the site their homepage — and there have been suggestions it’s interested in search. Well speculate no longer. The app is here. Without much fanfare at all, you can now keep tabs on your notifications, friend requests, ticker, and chat all without opening your browser.

There’s been speculation as to when Facebook would offer such an application, and what it would do, and it appears that it’s about as basic as it gets. Messenger for Windows basically brings the right-hand side of your Facebook home page to your desktop. Of course it does have a few implications, namely the death of competitor messaging systems. The likes of AIM and Yahoo Messenger have been struggling to compete with integrated offerings from social platforms, and Facebooks Messenger app has been a major threat to market veterans.

The one feature we wish were available would be the viewing and commenting controls that you have when you’re visiting Facebook in-browser. Via Messenger, the ticker won’t actually reveal the items it’s announcing: instead, you’re redirected to the site. Included items like listening in with friends or viewing pictures via the desktop app would be a huge improvement.

But as far as its utilitarian purposes goes, Messenger does well. And it’s also got us waiting for a more fully-fledged desktop Facebook experience.

Update: Facebook apparently wasn’t pleased that someone stole their thunder. This app release wasn’t pushed out by the company so much as it was leaked out into the world. ’s response: officially releasing the application, and updating the company’s support pages. “We encourage readers to learn more about the app in the Help Center here. They can also find the official download link within the Help Center or at the link here,” said a spokesperson in a statement to The Verge on Friday.