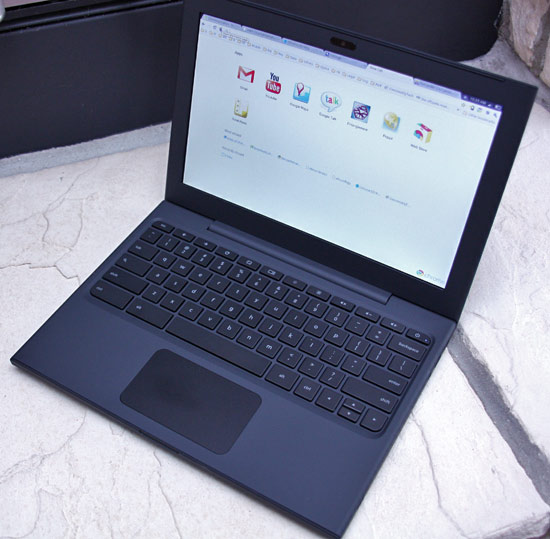 Google’s first Chrome OS notebook was unveiled only three days ago, but as promised, it’s already been delivered to a lucky handful for a test run. And lucky for us, those handful are reporting on their findings.

First of all, let’s review the specs announced at the December 7 Chrome event. The notebook has a 12-inch display with a full-sized keyboard, as well as an large, clickable touchpad, and built-in webcam. It features 3G and Wi-Fi for connectivity, and an impressive battery life: eight plus hours of active use, and another eight plus for standby.

Now for some basic updates.

Engadget claims that the the Cr-48 has a quality feel, and its hardware is made of a “soft, rubber-like matte” plastic. The site compares its exterior to the Droid and also says it’s reminiscent of the old MacBook. Apparently, though, the Cr-48’s keyboard is fairly unique. As we were told on Tuesday, there’s no caps lock (which has been replaced by a search key), no function controls, and no command button, opting instead for larger Ctrl and Alt keys. Engadget also says that the search has the ability to work as a caps lock if you want; otherwise clicking search will launch a new tab. One thing is completely unchanged, however, and that’s the Chrome keyboard shortcuts, which remain the same.

Maybe the strangest choice is the clickable touchpad, which in a very Apple-like move, does not feature a right click option. Tapping two fingers to the pad delivers a right click.

Computer World also mentions there is an SD memory card slot, and only one USB port. The site also reports that there is no Ethernet connection.

Since it’s a totally unbranded model, testers can only assume what kind of processor it’s working with. Computer World guesses it might be Intel, and TechCrunch supports that, saying it’s using an Intel Atom. But the jury’s also still out on what kind of memory and storage the Cr-48 features. Apparently, it’s got a solid-state drive, but its size is anyone’s guess.

As far as performance, Computer World claims that websites featuring JavaScript were a little laggy, but still functional. TechCrunch reported that multiple testers have had issues playing Flash content, including sites like YouTube and Hulu.

As in the demo, the startup process is quick and easy and you sign up with a Google account and take your headshot (or skip it if you’re camera shy). It then brings up that well-known Chrome tab as promised. Computer World says that if you know how to use Chrome as a browser, then you already know how to use Chrome OS. As promised, it’s nothing but the Internet. And there’s not much more to say about that, at least yet.