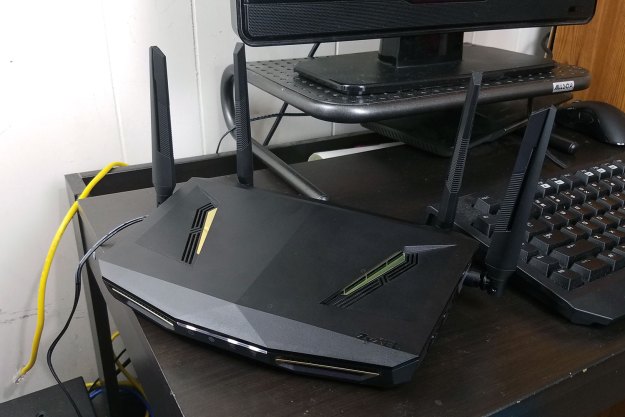 The home and office networking market has become a huge mess. While manufacturers are competing to provide unique approaches to Wireless AC connectivity, others are taking a step back to create alternatives to the standard one-unit router, such as the Eero “mesh” networking kit, and Netgear’s Orbi two-piece kit . Zyxel, it seems, isn’t taking the “mesh” bait just yet, pumping out new routers and compatible repeaters aimed to fill every space in your house or office – the old-fashioned way. For our Zyxel Armor Z2 review, we put the high-end router to the test to see if it can blanket a whole home in fast Wi-Fi.

It’s a router, but it looks like a robot spider

If your Wireless AC device only has two internal incoming antennas and two outgoing antennas, it will have speeds of up to 867Mbps on the 5GHz band, and 400Mbps on the 2.4GHz band. That 2×2 antenna setup is quite common with recent smartphones, tablets, and laptops. Thus, to get the full benefits of the Armor Z2’s wireless speeds, you’ll need a device, wireless adapter, or add-in PC card supporting a 4×4 connection. Most devices don’t have that.

In addition to the four external antennas, the router relies on a dual-core processor clocked at 1.7GHz, 512MB of system memory, and 4GB of internal storage used only by the operating system. On the back, owners will find a gigabit Ethernet port dedicated to the router-to-modem connection, and four additional gigabit Ethernet ports for wired devices. The router even includes one USB 3.1 Gen1 Type-A port, and one USB 2.0 Type-A port on its right side, for sharing files or a compatible printer across the network.

Visually, the router looks neat, sitting like a silent, robotic spider with its legs jutting up into the air. There are vents lined along the sides to passively dissipate the heat generated inside, along with two gold-lined vents on the front, and two eye-like gold-trimmed vents on the top. Its appearance would fit nicely alongside a gaming PC, but might look out of place in most living rooms.

Finally, a decent router interface without an app

Once the router is connected to the ISP’s modem, there are two ways to set up the network — via a wireless mobile device, or by a wired connection such as a desktop PC. The default wireless connection information is located inside the packaging, but because we’re old school, we chose to set up the Armor Z2 via an Ethernet connection.

The Armor Z2 aims to be future-proof by providing a maximum Wi-Fi speed not supported by many current wireless devices.

We loaded up a web browser and typed in “http://myrouter” into the address bar. From there, the router took us through the process of changing the default username and password, updating the router’s firmware, and creating a name for the two network connections (5GHz and 2.4GHz). After that, we were fee to explore the router’s main interface.

Before we did that, we set up the WRE6606 wireless range extender device provided by Zyxel. Designed specifically to extend the Armor Z2 router’s reach, it plugs into a wall’s electrical outlet. It can also be powered by a USB-based power supply (sold separately).

Once powered up, we went back into the router’s interface, clicked on Expert Mode (more on that in a minute), clicked the Wireless tab, clicked on the WPS option, and then chose “Push Button,” which told the router we were hitting the WPS button on the extender. When pressed, the extender and router then began talking to each other to extend wireless coverage.

Before moving on, we need to point out that the WRE6606 is an AC1300-class device. That means it has two internal incoming antennas and two outgoing antennas. While the router is capable of speeds of up to 1,733Mbps on the 5GHz band, and up to 800Mbps on the 2.4GHz band, the extender can only handle a maximum speed of 867Mbps and 400Mbps on each respective band.

Take it easy, or flip into expert mode

The web-based interface loads Easy Mode by default. Splashed across the screen is a map of connected devices, such as all laptops, desktops, mobile devices, and even the WRE6606 repeater. Along the bottom of this interface are five on/off switches for the overall wireless broadcast, separate guest access, parental controls, notifications, and the router’s LEDs. Simple, Right?

Having a dedicated wireless repeater is a nice touch, but in our testing, Zyxel’s WRE6606 extender just wasn’t needed.

The screen-wide map is quite useful. Move the cursor over one of the connected devices, and you’ll see a menu appear with choices to rename the device, change its icon, block the device from the network, and see general information such as assigned IP address, MAC address, device type, and operating system. For some reason, the router believed our Windows 10 Pro laptop was running Windows XP, but it was accurate in its description of other connected devices.

Parents will find the renaming feature a necessary component in network management. Although Windows 10 and Android allow you to assign a name locally on the actual device, the router can save time by simply allowing you to assign names on the router side, so they’re easy to identify on the map. This comes in handy later, when setting up parental control rules.

For advanced users, Zyxel has a tab on the right side of the interface window labeled “Expert Mode” that brings up a more detailed view of all the settings and reports. The default window is the main Status page providing device and usage data while a toolbar resides at the bottom for accessing six other sections of the backend: WAN, Wireless, LAN, Applications, Security, and Maintenance.

For instance, the Applications section is where you’ll find tools for parental controls, managing bandwidth, and sharing media (USB, FTP, and SAMBA). The Maintenance area is where you upgrade the firmware, change the router’s login information, turn on remote management, and so on.

In the Parental Control section, parents simply click on the Add Rule button to pull up a new window to set limits. The router will provide a list of all connected devices by their MAC address and any associated name defined by you or the device. Parents add the device to the rule, and then select the days and times the device can access the network in a 24 x 7 grid. Parents can also block sites and addresses using a keyword, and block/allow services that use a specific protocol or port.

The router looks nice, sitting a silent, robotic spider with its legs jutting up into the air.

If you liked the previous network map splashed on the Easy Mode interface, but don’t want to leave Expert Mode, there’s one located under Live Network Monitor in the Status section. This map is a bit more detailed, showing each connected device, their names (network-based or router-based), and the amount of data tossed between device and router. It also shows the up/down data amount between the router and modem.

There’s lot to see and tweak in the Expert Mode. However, customers wanting to simply plug-and-play the router should have enough settings for shallow customization through the Easy Mode interface.

Zyxel provides the ONE Connect app for Android and Apple’s iOS platform too, which can be used to view all devices connected to the router, see the connection details of both wireless bands, update the router’s firmware, and run a network diagnostics test.

Based on Zyxel’s product page, the router has a range of around 500 square meters, which translates to 5,381 square feet. In other words, it projects a circle of coverage of up to 41 feet out from its current position. This is where range extenders come in: users place the devices at the edge of the router’s circular coverage to create another extended bubble of connectivity.

However, extenders simply repeat the weakened state of the router’s signal, so you may have connection in an otherwise unreachable area. The throughput of data from the modem, to the router, to the extender, to the connected device, may still be rather slow.

First, here are the 5GHz numbers sitting near the router:

Here are the 2.4GHz numbers sitting near the router:

Next, we took the same laptop and sat down next to the repeater in the adjacent room. Two walls and around 30 feet of space separate the repeater from the router in this specific test. For starters, here is the 5GHz connection:

Now here are the 2.4GHz connection numbers next to the repeater:

Finally, we assumed we would have better throughput speeds by connecting the laptop directly to the extender via its single gigabit Ethernet port. What we discovered is that although our Alienware laptop resided next to the repeater device, it was apparently still connected to the router itself. The numbers above have nothing to do with the repeater, but rather the drop-in throughput was simply due to the laptop’s distance from the router.

Thus, here are the numbers we received when wired to the repeater device:

Of course, we would likely see better numbers had we tested both devices in an open space, like a ballfield. But that’s not really a real-world scenario given they’re meant to reside within a home environment. Still, on the router front, its performance is admirable at close range, and not too shabby when you’re at least 30 feet away in another room.

Finding warranty information on Zyxel’s website was a real pain. Eventually we landed here, which states that Zyxel covers hardware for two years after purchase. If the product fails due to faulty workmanship and/or materials, the company will repair or replace the device. If Zyxel can’t resolve the problem, then it will provide a refund matching the original purchase price.

Zyxel’s Armor Z2 router aims to be future-proof, providing up to 1,733Mbps for wireless devices that can handle four incoming and outgoing streams. Many Wireless AC devices can only handle two, but as component prices continue to drop, wireless devices will eventually catch up to this router. Until then, it performs great up close and admirably from afar. Having a dedicated wireless repeater is a nice touch, but in our testing, the repeater just didn’t perform as expected.

As of late, the Armor Z2 seems rather average when the client device is placed near the router, if not slightly better. But despite having the WRE6606 wireless extender repeating the signal 30 feet away, we saw better throughput with Netgear’s Orbi two-piece kit at that distance. Then again, the Orbi kit is more expensive, selling for $350 whereas Zyxel’s combined router ($170) and extender ($80) add up to a cheaper $250. Also make sure to check out our best wireless routers.

This router should last awhile, given its support for 4×4 wireless connectivity. Wireless AD (WiGig) is crashing the 2017 networking scene, and other manufacturers are testing the networking waters to provide better whole-home coverage than what the typical standalone router can produce. Still, we this the Armor Z2 will feel fast enough for three to five years.

The Armor Z2 offers solid performance for gamers and mainstream customers alike, so you can’t go wrong purchasing this router. Heck, it’s even futureproof, as Wireless AC devices with additional internal antennas begin to saturate the market and support this router’s fastest speed.

Remember, though, that the Armor Z2 is not a whole-home solution, so customers wanting “blanket” coverage complemented by quick-and-simply plug-and-play setups should look at a mesh router like the pretty Luma Surround WiFi kit. The Armor Z2 is focused on performance over a smaller area, and customization for enthusiast users.