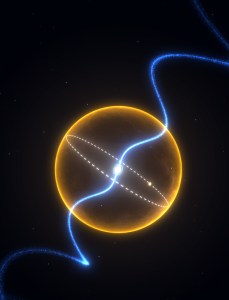 We’re going to go out on a limb here and suggest that the new planet discovered Australian scientists should be named “Lucy” — because no other name seems right for a planet made of diamonds.

According to scientists at the Swinburne Centre for Astrophysics & Supercomputing in Melbourne, Australia, the newfound planet measures an estimated 34,175 miles across — which makes it five times the size of Earth. And while that’s all well and good, it’s the planet’s composition that has everyone buzzing.

“We are very confident it has a density about 18 times that of water,” said study leader Matthew Bailes, whose team discovered the planet while using the radio telescope at Australia’s Parkes Observatory. “This means it can’t be made of gases like hydrogen and helium like most stars, but [must be made of] heavier elements like carbon and oxygen, making it most likely crystalline in nature, like a diamond.”

The crystalline planet was found orbiting a celestial body known as a “millisecond pulsar” — a small, spinning remnant of a much larger star that went supernova. Named “PSR J1719-1438,” the pulsar is one of very few such entities to have a planet orbiting it.

According to Bailes, while planets that form around traditional, newborn stars are created by material orbiting the star clumping together, pulsars spin so quickly that they strip material away from their orbiting partners. What’s left is the ultra-dense core of whatever was in orbit.

The diamond-like planet was probably a much larger star that had its outer layers stripped away in this fashion, the astronomer hypothesized.

Still, former star or not, we’re stilling pulling for it to be named “Lucy.”

Inside the U.K. lab that connects brains to quantum computers