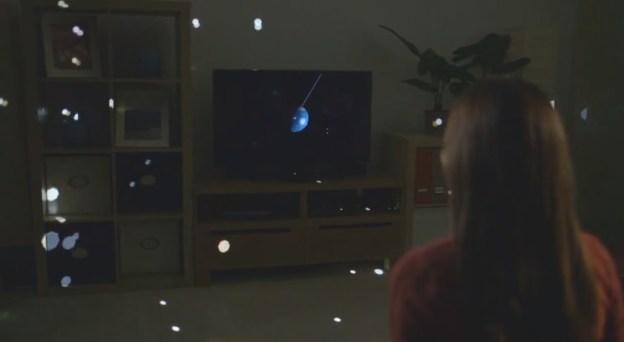 Today at CES, Microsoft Research joined Samsung on stage to show off an early look at a new piece of technology, which it dubbed IllumiRoom. The oddly named IllumiRoom is very literal in its title. It combines a Kinect and a projector, to turn your room into a display.

IllumiRoom was introduced by Microsoft’s Chief Technology Strategic Officer, Eric Rudder, who emphasized that this is just the first step in a much larger scheme. Microsoft wants to potentially make any surface in your house into a computer display. Imagine having a Kinect’s motion-based controls work on a projected surface, say a random counter-top  and you have an idea where it wants to go.

The goals are lofty, and the reality of turning a blank wall into an interactive display capable of replacing a far more sensitive and responsive screen or keyboard are likely still years away, but the potential is undeniable.

Microsoft was quick to point out that this technology is still in the very early stages – “raw” was a word it used to describe it – but that didn’t stop the manufacturer from having a little fun with it.

To display a few of the simpler things the IllumiRoom can do, Microsoft released a video that merely hints at the potential of the tech, but also shows off what might be the next iteration of the Kinect – or at least one possible feature of it.

The video below highlights the idea that explosions on screen won’t be limited to the TV, but could instead carry over into the room itself. While this aspect of IllumiRoom may end up on the floor of a lab somewhere, it could also be incorporated with new technology that will be available for the next Xbox which hasn’t been announced officially yet (but we think will be out before the end of the year). Either way, it’s an interesting look at what the technology could potentially do.

Microsoft is keeping quiet about the technical aspects and its detailed plans, but more news is planned to be released in April at CHI in Paris.