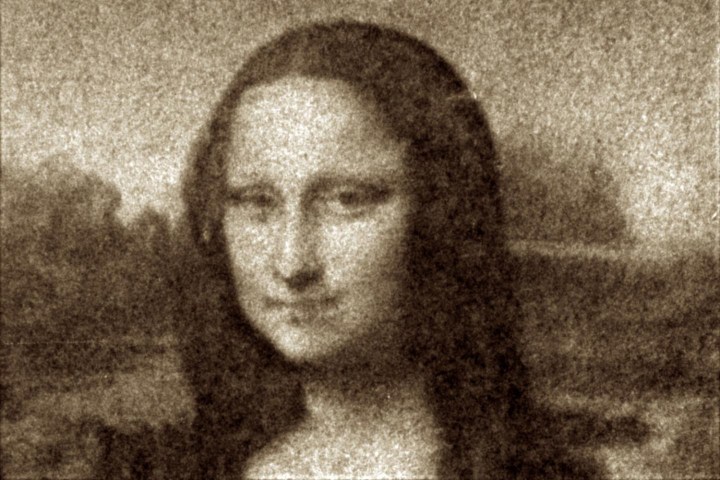 Scientists have used genetically engineered bacteria to recreate a masterpiece at a microscopic scale. By engineering E. coli bacteria to respond to light, they’ve guided the bacteria like tiny drones toward patterns that depict Leonardo da Vinci’s Mona Lisa. It’s not artistic recognition they’re after. Rather, the researchers want to show that these engineered organisms may someday be used as “microbricks” and living propellors.

“From a physicist’s perspective, bacteria are marvelous, self-propelled micro-machines,” Roberto Di Leonardo, a physics professor at the University of Rome who worked on the project, told Digital Trends. “We are studying possible ways in which these fantastic micro-robots could be controlled using physical external stimuli, such as light, in order to exploit their propulsion for transport and manipulation of microscopic systems inside miniaturized laboratories on a chip.”

When it comes to pound-for-pound swimming skills, E. coli make Michael Phelps look like an amateur. Using propellors powered by a living motor, E. coli can zoom through liquids, covering a distance 10 times their length in just a second. Though their fuel is usually oxygen, scientists recently discovered a protein that allows ocean-dwelling bacteria to be powered by light. They’ve since passed this trait on to other bacteria like E. coli through genetic engineering.

By genetically modifying E. coli and taking advantage of physical properties of the bacteria, Di Leonardo and his colleagues were able to use patterns of light to guide the bacteria toward replicating the Renaissance masterpiece.

“Swimming bacteria, much like cars in city traffic, are known to accumulate in areas where their speed decreases,” Di Leonardo explained. “So if we want to ‘paint’ a white stroke — where bacteria is the paint — we need to decrease the speed of bacteria by locally decreasing light intensity in that region so that bacteria slow down and accumulate there.”

In the study, the researchers shined a negative image of the Mona Lisa, causing the light-responsive bacteria to replicate the iconic portrait. They also conducted the engineered E. coli to morph between images of Albert Einstein and Charles Darwin.

Recreating faces of famous figures is impressive and all, but Di Leonardo hopes this study can spur some real-world innovation. For example, by using lights as guides, researchers may be able to use bacteria as building blocks and propellors for microscopic devices.

“In physics and engineering applications, these bacteria could be used as a biodegradable material for optical 3D printing of sub-millimeter microstructures,” Di Leonardo said. “On the other hand, dynamical control of bacteria could be exploited for in-vitro biomedical applications for isolating, sorting, and transporting larger cells for analysis or diagnostic purposes on the single-cell level inside miniaturized laboratories.”

A paper detailing the research was published this week in the journal eLife.

Engineers for James Webb have stacked its 18 images into one