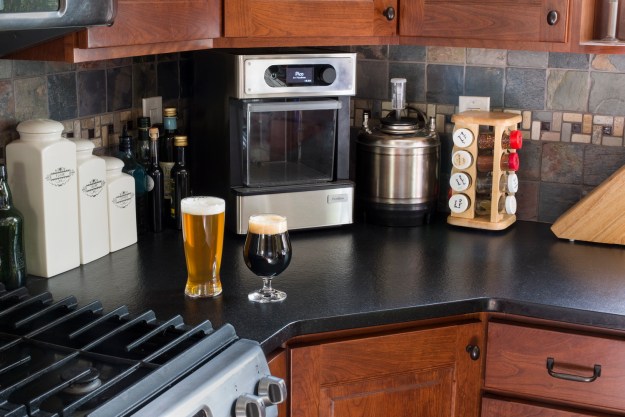 “Anyone with enough cash and time can make high-quality homebrew with the PicoBrew Pico.”

“The waiting is the hardest part” are not only lyrics in a Tom Petty song but how you’ll feel when using the PicoBrew Pico, a countertop appliance that promises to take the hard work out of homebrewing.

Though some have called it a “Keurig for beer,” the process isn’t as simple as pushing a button. The ingredients do come in preportioned packs that significantly reduce the amount of time you’ll spend actually doing the work.

A box full of toys

The Pico arrives in a giant box. It may be only 16 by 12 by 14 inches (I say only, as if it’s not bigger than my Mr. Coffee Cafe Barista), but it comes in a 28-by-22-inch box. There are more boxes inside that box, one of which holds the Pico. There’s also a brewing keg, serving keg, Fresh-Squeezed IPA PicoPak, and a box of knickknacks — a racking tube, keg cozy, keg seal, CO2 regulator, and so on — al of which are necessary to complete the brewing process.

There’s also the fairly thick manual. Do not lose this. Do not throw it away. You need this manual. Read it before you do anything else, because otherwise you’ll get everything set up, only to realize that you need gallons of distilled water that you have to schlep back from the grocery store. Ditto for hydrogen peroxide. You’ll also want to think about timing before diving in. It will take some time to set up and clean the machine, as well as start it brewing. Then you’ll need to do some more cleaning once the brewing is done. Don’t start right before you’re headed out on a weekend trip, because there are some steps that you should do the next day.

After you’ve read the manual and discovered what you’ve gotten yourself into, it’s time to set up the machine. The Pico takes up some counter space, and it obviously needs to be plugged in. Also, it’s going to connect to your Wi-Fi network. The first time you turn it on, you’ll be prompted to connect, and then you’ll have to go to Pico’s website to create an account and enter your device’s registration code. Next, you’ll want to do the “first rinse,” which should take around 10 minutes, provided you read ahead and have distilled water on hand. This is one of the machine’s self-cleaning phases, and the display will walk you through the steps, so you will have to be present and participate a bit.

Once your machine is clean, you’re ready for the 2.5-hour brewing session. This does not mean your beer will be ready to drink in less than three hours. Oh, no. But you can binge watch a few episodes of The Crown or what have you while the Pico does most of the work. You’ll insert the hops pack and grain pack into the plastic tub, and then put on the plastic lid. If you put the lid on upside down, liquid will start overflowing and spilling onto your counter. Probably. OK, definitely. It happened to me.

The PicoBrew Pico turns just about anyone into a beer maker, but it comes with a high price tag and requires patience.

When you turn on the Pico, it reads the PicoPak’s RFID tag, so it knows exactly what you’re brewing. That means it will take care of all the settings for you, preventing you from messing things up and leaving you only a few customization options: the alcohol percentage and the bitterness. I made the Buffalo Sweat Stout, and upped the alcohol a smidge while also lowering the bitterness a bit. I felt very powerful. Then you hit start, and the machine gets to work.

Mid-brew, my husband came home. “Is it going to sound like that for a week,” he asked, looking skeptically at the space hog sitting on the counter. “No, only another 45 minutes or so,” I assured him. It was loud. It was kind of like being inside a dishwasher, I imagine. The scent wafting from it isn’t unpleasant, but it reminded me of what we used to have to feed the horses at camp. If you’re interested in what’s going on in there as it’s making the wort, you can watch its progress on PicoBrew’s site.

Once the brew session is over, it’s cleaning time. The PicoPaks are compostable, which means they have one distinct advantage over Keurig pods.

The brewing keg will be hot, and you need to leave it to cool overnight before adding a packet of yeast to it. Then you have to decide if you want fast ferment (four to seven days, depending on your room temperature and type of beer) or standard ferment (about 10 days). I did the fast version and left it for about six days, since my kitchen was hovering around 70 degrees most of the time.

By now you’ve watched all of The Crown and are wondering if you should give Reign a try. You can decide later. Now you have to rack your beer. This step requires some in-depth cleaning and the aforementioned hydrogen peroxide. Once again, your Pico will lead you through the steps of racking the beer. I actually had some problems here and had to hop on a call with customer support. The machine is supposed to use suction and pressure to transfer the liquid from the brewing keg to the serving keg, but while some brown liquid would enter the clear tubing, there wasn’t enough pressure to push it into the serving keg. The Pico rep thought it might be because I still had the fast fermentation adaptor in the brewing keg lid, as opposed to having swapped it out for the pressure release valve — a step I couldn’t find in the manual. After a half an hour on the phone (and after I’d managed to squirt uncarbonated beer in my face), we’d fixed the problem without entirely diagnosing the issue.

Post-racking, you can decide between quick and natural: a fast carbonation (about 36 hours) with a CO2 regulator or keg condition/natural carbonation (twice as long as the original formation). I chose the former. I screwed a CO2 cartridge into the regulator, stuck it in the serving keg, and shoved the whole thing in the fridge for 36 hours. Luckily, one of the fridge’s shelves tilts up, or I would’ve had a hard time fitting it all in there. Then, it was time for the deepest clean yet, which involved taking apart the brewing keg to fully clean it.

A day and a half later, I pulled out the regulator and replaced it with a plug and started pouring. I’ve never had Buffalo Sweat (the beer or otherwise), but it was pretty good, rich and a bit malty. The keg poured a decent head. The serving keg holds 5 liters or 169 ounces. That equates to about fourteen 12-ounce beers. My beer was ready to serve on a Saturday. By Tuesday, it was decidedly flat, so you don’t want to leave it in there too long.

My friend Luis banned himself from Kickstarter for overpurchasing, and I think it was the Pico that did him in. It’s $799. I asked him why he — who has never home brewed before — wanted to take the plunge. He said it was precisely because he’d never done homebrewing and he liked how simple the Pico looked. He received his machine before I did and has used it six times. He thinks the beer turns out well and is pretty happy with it, though he did say if it was something he hadn’t Kickstarted, he might not be inclined to buy it in a store.

The screen walks you through all the steps.

The PicoPaks range in price from about $21 to $30, and there are currently 41 types available in the brew marketplace. When I spoke with some of the brew masters at Pico, they said they have many more in the works as well. For them, the excitement is getting people to make beer from all over the world that they’ve never tried before. All that depends on breweries licensing their recipes, so  the company can turn them into PicoPaks. PicoBrew also wants to let customers start creating their own recipes and potentially sell them on the marketplace, with those customers getting a percentage of the sale. That would certainly inject some more creativity into the process.

The PicoBrew Pico isn’t quite an automated beer-making machine, but it comes fairly close. It takes out much of the labor that goes into homebrewing but also some of the personalization. It doesn’t fully eliminate some of the pain points — so much hydrogen peroxide! — but is far less intimidating than old-fashioned homebrewing.

PicoBrew actually makes another machine, the Zygomatic, which is aimed more toward professionals. It’s far larger and requires more babysitting and more work overall. But the Pico has some competition for the amateur, automated homebrewer: the MiniBrew is on Indiegogo right now, and there’s also the Brewie. Both are more expensive than the Pico. The former is closer in spirit to the Pico, while the latter is more like the Zygomatic. Depending on where you live, you might also be able to pick up a comparable six-pack at the corner store.

The Pico seems pretty well-made, though I did have some sort of software issue in addition to the pumping problem. Basically, I got an error that wasn’t really an error, according to the Pico customer support team. To keep it in tip-top shape, the responsibility is on you to clean it really well. But to survive and thrive, PicoBrew really needs to get a glut of breweries to sign on to making PicoPaks. Forty-one varieties is a good start, and they should definitely keep the focus on the unique and hard-to-get. My favorite beer of all time is one I can’t buy in the U.S. anymore, so if PicoBrew can get Beamish on board with making a PicoPak, I’d be thrilled.

If you have a lot of money but not a lot of time and are looking for a new hobby, the PicoBrew will definitely keep you entertained — especially if you’re rich enough to hire someone to do the cleaning for you.

Baristas beware, Bbox cafe uses robots to brew your morning coffee
Atomo’s ‘molecular coffee’ is brewed without needing to harvest coffee beans
Rushing out the door just got faster — CrunchCup lets you eat cereal on the go
Beer made with gene-edited yeast provides hoppy taste without the hops
The best light therapy lamps
CES 2022: The biggest news and announcements so far
Taco Bell’s Xbox Game Pass-style pass will put a taco in your belly daily for $10 a month
The weirdest tech we spotted at CES 2022
K-pop NFTs are here, but I’m not convinced they’re worth it
Solving VR’s ‘infinite walking’ problem with moon boots
Fighting football injuries with 3D-printed, hyper-personalized pads
Inside the U.K. lab that connects brains to quantum computers
ClipDart is an on-demand barber app aimed at people of color