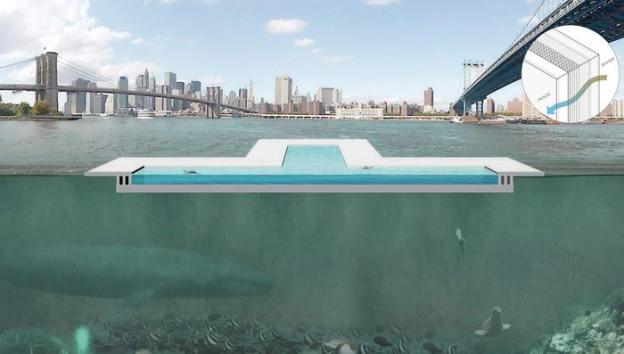 New York City is hardly the cleanest city in America, but we do have some majestic rivers flowing between our boroughs. The Hudson River is a historic watercourse that leads the city up into the scenic communities upstate, while the smaller East River separates Manhattan and Bronx from Queens and Brooklyn. Although the latter makes for a beautiful landscape against the shimmering city skyline, it is also polluted to all hell. It is so bad that in 1993, the city considered putting a gate in the river because sewage spillage was killing underwater life and stinking up the place. Media has also called swimming across the river “brave,” while Hurricane Sandy only worsened the pollution.

So given all this information, would you want to swim in a public pool floating in the middle of the East River?

We’re asking ourselves the same question with this proposed Kickstarter project for a floating public pool. A design by Family and Play Lab, this glass pool wants to change the way New Yorkers and visitors see the East River by dropping a strainer-like contraption in the middle of the water. The device is meant to filter the water and allow people to swim and see the river’s conditions, all while taking in the sights of the city skyline and bridges.

“+ POOL is designed to filter the very river that it floats in through the walls of the pool, making it possible for New Yorkers to swim in clean river water for the first time in 100 years,” the Kickstarter explains. “The layered filtration system incrementally removes bacteria and contaminants to ensure nothing but clean, swimmable water that meets both city and state standards. No chemicals, no additives, just natural river water.”

The team estimates that +POOL can clean up to half a million gallons of river water a day to help the city in its fight against pollution. The pool is designed to look like a plus sign, and each of the four sections will be catered to various types of swimmers: Sports, kids, laps, and lounge. Of course, all this comes at a price. Family and Play Lab is asking for $250,000 of funding to bring +POOL to life by summer of 2016. The team does promise, however, that if funding is completed, a smaller prototype will be available for viewing this August so the community can learn more about how this design functions.

For taking part in the Kickstarter, backers also have the chance to mark their names on something potentially life-changing. A pledge of $199 earns you a personalized tile to be placed around the corners of the pool, while additional prices go up for special colors. Early bird pricing is still available at $150, if you can snatch them before all 350 sell out.

Well, does this change your mind? We’re still skeptical, but it would be interesting to swim in the river and see for our own eyes exactly what kind of pollution we’re dealing with down under. Whatever it is, it’s probably not a whale as depicted in Family and Play Lab’s rendering.

Offshore buoy detects its first whale in waters along New York City
New York City’s subway cars to get high-tech makeover
High-tech MTA buses with Wi-Fi are now rolling around New York City
New York City drivers will now be able to pay for parking meters via phone
The best light therapy lamps
CES 2022: The biggest news and announcements so far
Taco Bell’s Xbox Game Pass-style pass will put a taco in your belly daily for $10 a month
The weirdest tech we spotted at CES 2022
K-pop NFTs are here, but I’m not convinced they’re worth it
Solving VR’s ‘infinite walking’ problem with moon boots
Fighting football injuries with 3D-printed, hyper-personalized pads
Inside the U.K. lab that connects brains to quantum computers
ClipDart is an on-demand barber app aimed at people of color