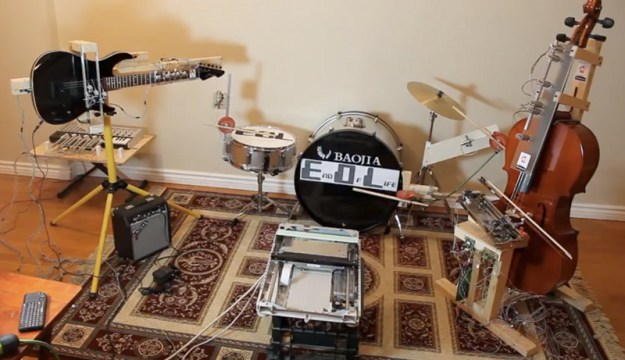 Sure, everyone gets worried about robots taking over our jobs, but what about our rock n’ roll?

If that’s the sort of thing that has you losing sleep, you might not want to check out this video from robot band End Of Life, because it’s, well… pretty fantastic. Using an electric guitar, cello, drums, and — get this — a flatbed scanner, the band performs a pretty great rendition of Marilyn Manson’s The Beautiful People, sans people.

The video was created by YouTube user bd594, who writes that he was actually working on a version of Mad World and had some trouble with the robot handling the cello. When he realized that the unintended sound coming from the instrument was eerily similar to a section of The Beautiful People, the first big hit for End Of Life was born.

“One night I was working on the cello and the stepper motor started to jitter almost ripping the cello [string] and bow apart,” he explains. “As I was jumping over to the power switch, I noticed that the jittery sound reminded me of a song. That song turned out to be The Beautiful People by Marilyn Manson. I programmed a small part for the Cello and it sounded great. Who would have ever though to use a cello in that song?”

The entire performance took over a month to produce, and he plans to post a follow-up video with a look at the “circuits, parts, and tools” required to make it all happen.

Of course, that’s all well and good, but what about the scanner? What’s that robot’s back story?

Leave it to the cello to steal all the glory.

The best robotic lawn mowers for 2022