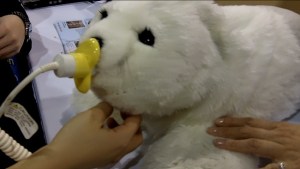 Following the devastating earthquake and ensuing tsunami in Japan back in March, together with the nuclear disaster at the Fukushima power plant, it’s little wonder so many people in the affected areas are still in need of comfort and support.

According to a Guardian report, residents returning to a retirement home some 17 miles from the badly damaged nuclear plant have been enjoying the company of two cute-looking seals. What makes them unusual is that they are actually fur-covered robots.

Several retirement homes in the areas hit by March’s disaster have turned to pets (real ones, that is) to help comfort the elderly. The Suisyoen retirement home, however, feels that the robotic variety is just as effective. The specially designed robot, called Paro, responds to a person’s touch and spoken word, as well as to light and temperature. It even makes a sound like that of a real baby seal.

In the report, 85-year-old Satsuko Yatsuzaka says of one of the robotic seals: “If I hold on to this, it doesn’t matter if there’s a typhoon outside, I still feel safe.”

Paro’s battery goes for about an hour, so after being used in the morning, its battery is charged during lunch so residents can pet it again during the afternoon.

“It’s just as cute as a little living creature and so everyone is looking after it every day,” said Ayako Shizo, who lost her home in the tsunami. She continues: “It does sometimes runs out of batteries and stop. But when it’s got its eyes open everyone stands around talking to it, asking it how it’s doing and such.”

The enormous clean-up operation is still underway in north-eastern Japan – a job that will take years to complete. And for as long as the nerve-fraying aftershocks continue to hit the area, the batteries in those seals are set to be replaced more than a few times.

Topics
Rescue drone can distinguish between survivors, victims in disaster zones
California’s new quake-alert app can give you vital seconds to take action
The U.S. military is looking for an underground lair to run experiments
The rise and reign of Starship, the world’s first robotic delivery provider
The best light therapy lamps
CES 2022: The biggest news and announcements so far
Taco Bell’s Xbox Game Pass-style pass will put a taco in your belly daily for $10 a month
The weirdest tech we spotted at CES 2022
K-pop NFTs are here, but I’m not convinced they’re worth it
Solving VR’s ‘infinite walking’ problem with moon boots
Fighting football injuries with 3D-printed, hyper-personalized pads
Inside the U.K. lab that connects brains to quantum computers
ClipDart is an on-demand barber app aimed at people of color