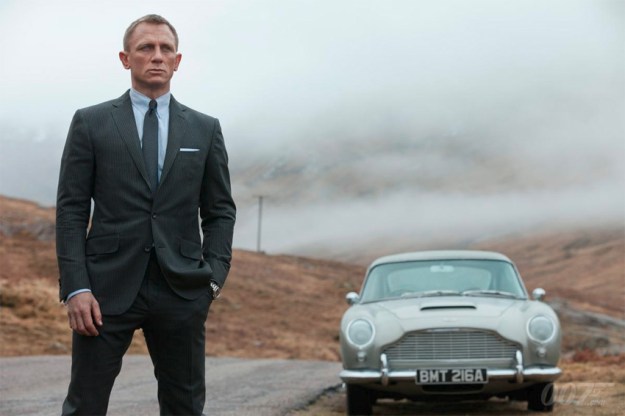 While the latest 007 flick, Skyfall, has already popped up in UK theaters, those of us in the States will lay eyes on Daniel Craig’s third go around as Bond this Friday, November 9. Of course, the super sleek spy is known for a closet full of badass gadgets, and Skyfall is no exception. Here’s a first look at all the gear Bond will be sporting in Skyfall — and where you can snag some for your next mission.

Plenty of exotic automotive nameplates have graced the Bond films throughout the decades — Lotus, BMW, and Jaguar have all served as four-wheel chariots for the dapper double O. But another car, more than any other, has come to define our beloved MI6 agent, and that car is the Aston Martin DB5.

Marking its third appearance in the long-running Bond franchise, the iconic Aston is back. We’re not sure what additional gadgets and weaponry the classic car may feature, but we expect upgrades to the original’s bulletproof shield, passenger ejector seat, oil slick sprayer and pop-out guns are in order. Consider our excitement shaken, not stirred, to see DB5 in action once again.

If you’ve seen the trailer for Skyfall, you might have noticed that Q is a lot younger than we’re used to seeing. In one scene, he issues Bond a brand new Walther PPK. Perhaps his most personalized gadget yet, this re-modified version of classic Bond handgun has a palm-sensitive biometric reader that will not fire unless Bond is the one holding the firearm. So, enemies, if you’re out of ammo, don’t bother trying to snatch this bad boy from the man. It’s not Bond’s most powerful weapon to date, but it sure is pretty cool.

Produced just for Skyfall, this limited-edition rifle case features an aluminium body with a diamond-quilted lining and chrome locks so even your weapons get the ultra-luxe accommodation. The handle in this commercial edition also has the telescopic sight, replicating the James Bond’s version to a tee (without the actual functionality, of course. We can only dream.) Globe-Trotter has crafted only 100 of these for global sale at a retail value of £5,000 (approximately $8,000 USD) so get your order in while supplies last, if you’ve got the cash.

Every gadget James Bond uses is full of crazy doo-dads and secret features. Oddly enough, with a modern smartphone, there’s an app for just about everything. The Sony Xperia TL is set to be Bond’s phone of choice in Skyfall, and this time he’s in for a treat. The TL will soon be released on AT&T and comes with a 4.6-inch HD screen and an impressive 13-megapixel camera, which we’d imagine would be good for spying. Bond might also make use of the NFC capabilities of the TL, which can pair with other devices by simply tapping it on them. The only downside is that Bond will be stuck using Android 4.0 at launch. Like the rest of us, he’ll have to wait for an upgrade to Android 4.1 (Jelly Bean) … unless, of course, Q has already hacked into the system to give him all the apps he’ll ever need.

Think you can walk into your nearest Omega retailer, spend big bucks, and get yourself a piece of that James Bond flavor? Well, yes and no. The special edition watch Bond wears in the film can perform any function a phone can (and then some), so expect some hidden tricks to unveil throughout the movie. While your Omega might not be able to shoot lasers, it is equipped with a scratch-resistant crystal dome, a chromium-nitride diving scale, rhodium-plated hands, steel case, and is water-resistant for up to 2,000 feet deep. The limited-edition Planet Ocean Skyfall edition is slated for release some time before the year’s end, with prices to be announced. Bond can be seen wearing the watch in some of the promotional posters, along with a classic black suit. Speaking of which…

Hardly a gadget but hardly James Bond without, the staple Tom Ford suit is a must-have if you’re looking to cop Bond’s style. The custom tailored suit uses breathable, flexible fabric that allows Bond to both battle and strut while maintaining a modern fit.