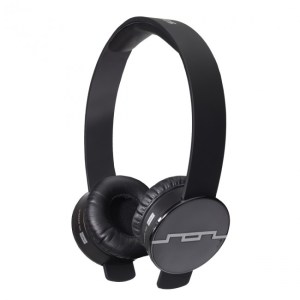 Kevin Lee, son of Monster Cable founder Noel Lee, is striking out on his own with a new headphone company which he and his co-founders are calling  Sol Republic. The details on the first four models of the new company’s line of headphones have just been released, and based on what we’re seeing so far, these cans appear to offer design on par with that of Monster’s line of headgear, but at a much more value-oriented price point.

At first glance, the Amp and Tracks headphones seem to bear some similarities to the models found in Monster’s Beats by Dr. Dre products. That doesn’t come as a huge surprise, since Lee was a big part of the development of the highly successful “Beats” line and many of their patented features, including the tangle-free cable design found on the Amp HD. That said, Sol Republic has integrated some unique features which do something to distinguish its products from those produced by Monster Cable.

For instance, the Tracks on-ears feature interchangeable headbands, speakers and cables. The headband on the Tracks HD model is being touted as a revolution in headphone design because it’s made of a “virtually indestructible” polymer (Lee joked during a press conference that, while he hasn’t managed to break the material yet, someone will likely come along and figure out a way to break it — but it will take some doing). Both Tracks models allow the speakers to slide on and off the space-age headband and are held on by a tension mechanism. As such, the headphones have no moving parts and should prove to be pretty durable. Want color options? Sol Republic will have plenty.

What makes the HD counterparts to the standard Amp and Tracks ‘phones seems to come down to that materials that are in use. The Tracks HD sports the aforementioned super headband, while the standard line does not. The HD Tracks also use an aluminum cap on the earcup whereas the standard Tracks is a “metal foil cap”

As for the Amps, the tangle free cord appears to be the most blatant physical difference. Of course, as the HD moniker would imply, we expect a difference in audio performance as well. In keeping with Monster’s reluctance to disclose technical differences, Lee declined to discuss what differences may lay inside.

Lee says the the new company is “motivated by the power of music”, pointing out he thinks that “…a good song can help you be happier, run faster and think clearer.”  In fact, the company’s name, Sol, is an acronym for “Soundtrack of Life.” Time will tell whether this approach will resonate with younger listeners, which Sol seems to be targeting.  They’ll need to do something pretty special. The company is venturing into a product category that is already severely short on elbow room.

The new headphones are expected to be launched together and sold through Best Buy and at the Apple store (yep, they’ll work with the iPhone) though no launch dates have been disclosed at this point.

We’ll reserve our speculations about sound quality until we’ve gotten some review samples in our hands. Until then, we will say that we like some of Sol Republic’s more interesting design points, and find the budget-friendly price point and lack of glitzy celebrity endorsements  a refreshing approach.

Topics
5G is enhancing the fan experience at the Big East Men’s Basketball Tournament
The end of Arecibo: The era of giant telescopes is coming to a close
The 17 best tech gifts for the whole family
6 new tech products to help combat COVID-19
The best light therapy lamps
CES 2022: The biggest news and announcements so far
Taco Bell’s Xbox Game Pass-style pass will put a taco in your belly daily for $10 a month
The weirdest tech we spotted at CES 2022
K-pop NFTs are here, but I’m not convinced they’re worth it
Solving VR’s ‘infinite walking’ problem with moon boots
Fighting football injuries with 3D-printed, hyper-personalized pads
Inside the U.K. lab that connects brains to quantum computers
ClipDart is an on-demand barber app aimed at people of color