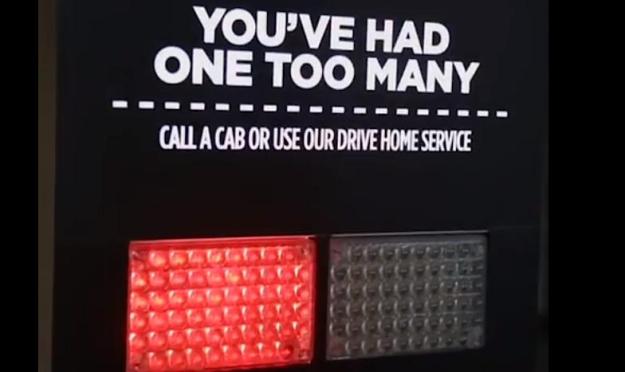 A Singapore nightclub has turned to tech in an effort to tackle the problem of car-driving patrons who think they’re OK to get behind the wheel after a night of heavy alcohol intake. In a recent 12-month period in the city state, there were 2141 cases of drunk driving, some of which proved fatal.

Working with local marketing agency DDB Group, club Zouk came up with the charmingly named Pee Analyzer, a urinal-based system that detects the amount of alcohol in a punter’s pee before issuing a warning if they’re over the legal limit.

And here’s how it works:

When a driver arrives at the club, they hand over their keys in exchange for an RFID parking card. Once activated, the card is capable of identifying a driver and recording information regarding the driver’s alcohol level.

It does this by way of a urine testing device fitted in the urinal, a device that its maker says will instantly reset to accommodate consecutive readings thereby avoiding any mix-ups with the pee of previous urinal visitors.

The urinal-based testing device is paired with an RFID reader that detects, tags and reads information from the cards, so if a punter’s pee contains too much alcohol, a message will flash up on a screen directly in front of the sloshed patron, saying, “Maybe you’ve had one too many to drive; call a cab or use our drive home service.”

Of course, there’s a chance the person at the urinal may be too drunk to focus on the words in front of them, or simply too wasted to compute the information, so when they hand in their card at the end of the night in exchange for their keys, an RFID reader at the exit will convey the information from the tagged card to the valet, who’ll once again suggest the car-owning clubber make alternative arrangements for getting home.

Zouk’s isn’t the first entertainment venue to utilize the urinal to get inebriated customers to think about how they might get home. For example, in Michigan last year a number of drinking establishments took a humorous approach to the problem of drink driving by installing talking urinal cakes.

“Hey, listen up. That’s right, I’m talking to you,” the cake says, adding, “Had a few drinks? Or maybe a few too many. Then do yourself and everyone else a favor, call a sober friend or a cab. Oh, and don’t forget – wash your hands.”

Topics
Las Vegas is about to get its first bar where robots mix the drinks
The Plum wine dispenser preserves opened bottles for up to 90 days
It can’t spin bottles like Tom Cruise, but this kegerator pours premixed cocktails
Using your phone while driving may be stupider than ever
The best light therapy lamps
CES 2022: The biggest news and announcements so far
Taco Bell’s Xbox Game Pass-style pass will put a taco in your belly daily for $10 a month
The weirdest tech we spotted at CES 2022
K-pop NFTs are here, but I’m not convinced they’re worth it
Solving VR’s ‘infinite walking’ problem with moon boots
Fighting football injuries with 3D-printed, hyper-personalized pads
Inside the U.K. lab that connects brains to quantum computers
ClipDart is an on-demand barber app aimed at people of color