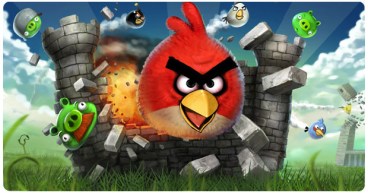 First it was just a game. A game that involved hurling irate birds at egg-stealing green pigs. To the surprise of many, it became a global hit, and in the space of less than two years has been downloaded onto various devices more than 300 million times.

Rovio, the Finnish-based company that brought the world the Angry Birds game, has followed up its phenomenal success with a range of themed merchandise that includes shoulder bags, flip-flops and toys. There’s talk of an Angry Birds movie. There’s even a cookbook. Baby blankets are on their way. And according to a report on Friday, a $1.2 billion valuation could also be just around the corner.

The Bloomberg report claims that the game’s creators are currently in talks that could result in Rovio being valued at $1.2 billion. The information was passed on by “two people with knowledge of the discussions.”

The source said that Rovio is thinking about taking a “strategic investment from a company in the entertainment business.”

Michael Pachter, managing director of research at Wedbush Securities, told Bloomberg that the potential investors could be game developers like Electronic Arts and Zynga, which could help the Angry Birds maker reach new audiences. Given the game’s success, reaching new audiences would be no mean feat. It’s not hard to believe that there might be undiscovered tribes in the depths of the Amazon rainforest going about discussing the game.

Pachter even raised the prospect of the game’s characters turning up at Disneyland. “I can see how Disney would take Angry Birds and turn them into a theme-park ride and a movie,” he told Bloomberg.

One thing is for sure. Rovio is keen to capitalize on the success of its global game. It has plans, for example, to sell Angry Birds merchandise in 200 retail stores across China.

The company received $42 million in funding back in March from Accel Partners, Atomico and Felicis Ventures. At that time Rovio board chairman Kaj Hed said, “We’re building this [into] a big company. Our goal is to become number one in the world.” We can’t help thinking those furious feathered creatures might just help make it happen.

Topics
Video-editing app LumaFusion to get a Galaxy Tab S8 launch
Angry Birds maker lays off 40 percent of its staff
Angry Birds 2 has 10 million downloads, but its money grubbing ruffles feathers
Angry Birds 2 launching later this month for mobile platforms
Angry Birds developer Rovio has clipped wings, as profits continue to decline
Best Gaming PC Deals: Save on RTX 3070, 3080, 3090 PCs
The best video game remakes reinvent the classics, they don’t just revisit them
Best Buy will give you a $10 to pre-order Hogwarts Legacy today
Save $620 on this Lenovo gaming laptop with an RTX 3070
AMD vs. Intel: which wins in 2023?
Forspoken settings: change these settings for a better experience
Add 2TB of storage to your PS5 with an SSD and save $70 with this deal
Fall Out Boy concert in Fortnite: start time, island code, and more