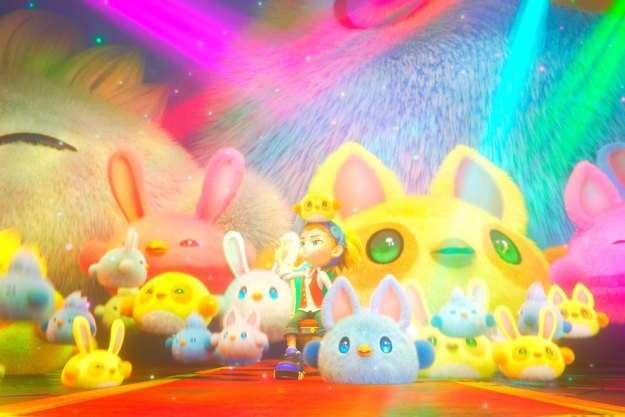 Balan Wonderworld review: I think to myself, what a blunder-full world
MSRP $60.00
Score Details

“Balan Wonderworld is a hodge-podge of half-formed platforming ideas that squander a whole lot of charm.”

If Balan Wonderworld doesn’t get major studios to embrace early access, nothing will.

When Square Enix launched a demo for its colorful puzzle platformer ahead of its launch, the response wasn’t kind. Players criticized everything from the game’s unwieldy camera to its painfully slow animations. Weeks before its release, Square Enix announced it was working on a day one patch to address the feedback, but admitted that it wouldn’t be able to fully turn the ship around in time.

That caveat should set some immediate expectations for fans who were hoping the game would be a triumphant return to form for former Sonic Team lead Yuji Naka. There’s almost certainly going to be some long-term tinkering here to get the game in proper shape. Consider this an accidental beta.

There’s a chance Balan Wonderworld could achieve cult status thanks to its charming aesthetics and throwback platforming. But for those who don’t harbor much Dreamcast nostalgia, it’s a frustrating hodge-podge of half-formed ideas that plays like a rough prototype for a game that’s still years away.

Balan Wonderworld should feel immediately familiar to anyone who grew up in the heyday of 3D platformers. Players explore themed worlds, hop over obstacles, and collect shiny gems scattered throughout levels. Its simplicity might be the selling point for those who are hoping for a nostalgic trip, but the game stumbles over the basics.

Movement is sluggish, as if the game’s protagonist is struggling to sprint through mud. The character’s standard jump is so short that even the smallest of gaps can prove to be a risk. The limited number of minigames are just plain boring and repeated ad nauseam. Most notably, the camera is an untamable beast that goes haywire the moment it brushes up against a wall.

Even the narrative framework is confounding. The child protagonist teams up with the titular Balan, a top hat-wearing maestro, to help solve strangers’ problems in a whimsical world. Each level represents a character’s specific struggle, like a fiery cavern that visualizes a firefighter’s deepest anxieties. What’s odd is that the actual story behind each world is only shown after completing its two acts and just before an uninspired, “three-hit” boss fight that feels entirely unrelated.

Its simplicity might be the selling point for those who are hoping for a nostalgic trip, but the game stumbles over the basics.

Nothing really meshes together. The levels feature deliberate visual motifs, but few stages actually take advantage of their settings or story in a meaningful way. Most are just filled with interchangeable platforming challenges that lack any real personality. Anytime the game introduces a promising mechanic, like a train riding section of a carnival level, it quickly drops the idea.

It all feels like a whiteboard doodle adapted into a rough proof of concept.

The game’s defining mechanic is its costume system, but that’s what really causes the already fragile seams to burst. Throughout the adventure, players can collect over 80 different outfits. Each one acts as a power-up that grants a different perk, like the ability to climb up spider webs or grapple toward large gems. The idea is that each one can be used to solve different platforming puzzles and promote experimentation.

I haven’t talked about the controls of the game yet, because there aren’t many to speak of. Any face button or trigger acts as a singular action button for the equipped costume. There’s no dash, no attack, and, most importantly, no dedicated jump button. When wearing a painter costume, for example, pressing a button shoots a glob of paint forward. That’s it. That’s all you can do until you switch costumes.

The system could have worked, but it’s implemented in a way that almost feels thoughtless.

The idea is to think carefully about what ability you may need to solve a puzzle, but that creates unforeseen complications. In one instance, I went off to grab some gems scattered around a laser grid. When I tried to leave the area, I realized I had taken a tiny step down a 6-inch high wall. None of my equipped costumes had a jump action, which meant I was just stuck there. The only way to progress was to take intentional laser hits, destroying my three outfits, and reverting me back to the costume-less default state that’s capable of jumping.

This happened constantly in my playthrough. I’d move through a level, lose a costume that could jump, and realize that I was now stranded. Similarly, there are times where progressing means having a specific ability equipped. If you reach an area and aren’t wearing the right outfit, you’ll have to backtrack until you find it.

The game tries to solve that with a changing room that’s accessible by standing on a checkpoint long enough (this is never explained and currently doesn’t trigger consistently), but players need to have a costume banked to pull it out of storage. More often than not, I found myself having to exit a level entirely, go back to a world that had the costume I needed, and schlep all the way back to just to complete a simple, obvious task.

To make matters worse, few of the abilities are fun to play with. They mostly grant basic actions that need to be used in specific situations. There’s no real experimentation. If there’s a spinning gear, the gear costume needs to be equipped. Some outfits are functionally identical too, giving players different animations that accomplish the same action, like floating over gaps. Others are just plain useless, like an outfit that allows players to run faster … but it activates at random. A funny troll, admittedly.

The system could have worked, but it’s implemented in a way that almost feels thoughtless. The levels are designed around the assumption that players always have the right tools for the job. Whenever they don’t, they’re met with a level-design shoulder shrug.

The only thing that Balan Wonderworld successfully brings to the table is charm. It boasts an unabashedly joyful art style and a lovely soundtrack, even if its compositions suffer from overplay. While misplaced, the story cinematics are endearing micro-films about empathy and kindness.

There’s a cute, albeit entirely underdeveloped riff on Sonic Adventure 2’s Chao Garden as well. Players care for an island full of colorful little bird-bunnies that feed on the gems collected through levels. It’s disappointingly shallow and barely features any interaction, but it’s at least consistent with the good vibes the game is trying to deliver, even if it fails to be fun.

“Failing to be fun” is sort of the running theme here. Balan Wonderworld could work as an endearing cartoon, but it falls flat as an interactive adventure.

Does it work? No. Is it at least thinking outside the box? Certainly.

What’s genuinely fascinating is that it’s rare that we ever see a major studio release fail in this way. Publishers like Square Enix don’t need to take huge gambles these days when they have so many reliable franchises and established gaming trends to pull from. Balan Wonderworld is a genuine risk that’s refreshing to see in a time where AAA gaming can feel entirely predictable.

That might give it a cult edge for gamers looking for something different. It has the same energy as forgotten platformers like Billy Hatcher and the Giant Egg. Does it work? No. Is it at least thinking outside the box? Certainly. With a dedicated fan base forming behind it, Square Enix might just have the feedback loop it needs to make a sequel work. Drop the next installment in early access and let its fans catch the problems before it’s too late.

It’s tempting to write Balan Wonderworld’s flaws off as part of its throwback charm, but that wouldn’t be entirely accurate. Beloved 3D platformers like Sonic Adventure may have some jank to them, but they’re still fun to play. Balan Wonderworld stumbles over the basics with sluggish movement, overly simplistic controls, and a half-formed costume gimmick that creates frustrating roadblocks at every turn. It’s charming enough that the “they don’t make ‘em like they used to” crowd may rally behind it, but those who want a nostalgic hit are better off hunting down a Dreamcast and sticking to the actual classics.

The main quest takes around 10 hours, but there are extra levels and a lot of collectibles to hunt down after the credits roll.

No. It’s impossible to recommend this at a full $60 price point. Wait for a bargain bin price drop if you’re morbidly curious.

Topics
The best PS5 games for 2023
The best games on Netflix Games
The best games on PlayStation Plus, Extra, and Premium
PS Plus games: what’s new in December 2022
The best skills to inherit in Fire Emblem Engage
Dead Space: how to fix the centrifuge
How to fast travel in Forspoken
Star Wars Jedi: Survivor will now release in April following delay
How to get the Silver Card in Fire Emblem Engage
One Piece Odyssey’s great ending would have made for a perfect anime arc
Don’t need the Xbox Series X? The Xbox Series S is $50 off today
Tomb Raider returns as a mobile roguelike via Netflix
Samsung’s 49-inch Odyssey G9 gaming monitor is $600 off today