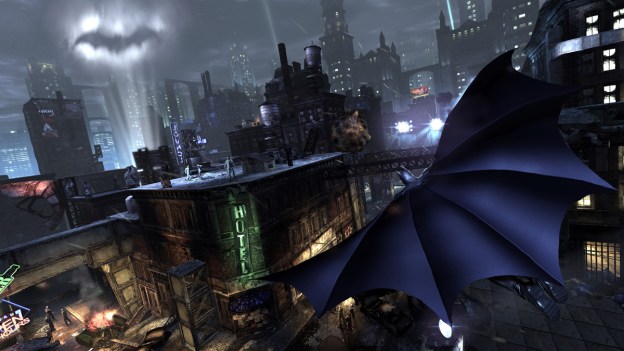 Buried in the talk of percentage increases and quarterly results, the Time Warner earnings call last week offered one tiny little nugget of information to get the blood of gamers going. During the call (which Yahoo Finance transcribed), beyond the reassurances to investors that their money was deeply in love and would soon be producing plenty of baby money, Time Warner’s impressively titled Chief Financial Officer and Chief Administrative Officer, John K. Martin, let slip some surprising news about the future of Rocksteady’s Batman Arkham franchise.

“And we also have a strong games release this year, which will include the next release in the Batman Arkham franchise,” Martin said. “So all in all, we expect Warners to post another very strong year in 2013. And with a little luck, the year should be as good or maybe even a little bit better than 2012.”

While the game is being developed by Rocksteady, it is being published by the Time Warner owned Warner Bros., which also holds all the licensing rights to the Batman brand. It’s no surprise that a new Batman game from Rocksteady is on the way, it’s the time frame that is surprising.

When Arkham City was released in October of 2011, it quickly went on to ship nearly 5 million copies in just 10 days, which made it the best-selling game of the year to that point. It was soon surpassed by a few different titles, but there was no question that it was a critical and commercial success. A sequel was inevitable.

In fact, it was soon leaked that the sequel would actually be a prequel depicting Batman’s first meeting with the Joker for the first time, and featuring the Justice League. It was also rumored to be based on the Silver Age DC characters, and would be set in the 1950s. That would make it more of a new game with familiar mechanics than a direct prequel though. Of course, Rocksteady wasn’t likely to comment, but the sources seemed convinced. The release date of that game was rumored to be 2014, which would have almost certainly meant a next-gen game. This seemed to be verified by the news that Rocksteady was actively hiring talent to work on a AAA title for the next Xbox and the PS4. It all made sense – until this news.

Martin specifically said that the game was an “Arkham franchise” game. There have been plenty of other Batman games, including recent ones like the Traveller’s Tale’s Lego Batman 2: DC Super Heroes, but Martin’s statement seems to focus on the Rocksteady titles. But the question then becomes, will Rocksteady have time to release a third Batman game in such a short time frame? They have shown that they can – Batman: Arkham Asylum was released in August of 2009, then just twenty-six months later Arkham City was released. If releasing a third game in six years was Rocksteady’s plan all along, then a 2013 release is very possible. But given the development cycle the earliest we would likely see the new game would be late in the fall, perhaps October or November at the earliest. That raises another major question: What systems will the new game be released on?

the next generation of Sony and Microsoft consoles will be announced this year, and at least one – if not both systems – will almost certainly be in stores right around that time. If the game releases on the Xbox 360 and PS3, then it will likely be overshadowed by the new systems and their launch games. It should still sell well, but not nearly as well before the next gen splits its audience. That begs the question, could a new Batman Arkham game actually be a launch title for the new systems?

If that is the case, to paraphrase the words of Philip J. Fry, Rocksteady and Warner can go ahead and “shut up and take our money!”