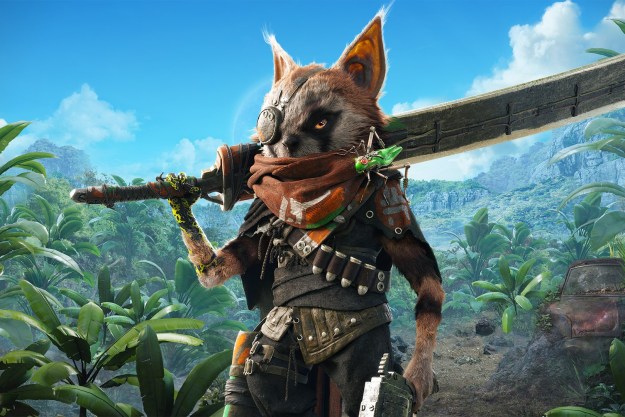 “Despite biting off more than it can chew, Biomutant is a creative labor of love with strong RPG hooks.”

A lot of postapocalyptic media tends to be grim. Games like The Last of Us Part 2 are gritty stories about human beings struggling to survive in a dark and dreary world. Biomutant is downright cheerful by comparison.

The long-awaited open-world game is set in a future where humanity has been wiped out entirely and nature has reclaimed the Earth. There are no people in the game, just mutated animals living their best lives. There’s still a high-stakes plot, crumbling buildings, and resource scavenging, but it’s all more of a fantasy slice of life.

Biomutant is a delightful experience complete with inventive world building and strong RPG hooks. It bites off more than it can chew when it comes to its scale, but it’s a promising start for a new franchise with a refreshing vibe.

Described as a “kung fu fable,” Biomutant is an action RPG that’s as adorable as it is morbid. The Earth as we know it has been destroyed by a man-made ecological disaster. The human race is seemingly dead, but animals have evolved in the aftermath. Players control a foxlike creature who must save the Tree of Life by defeating giant predators known as Worldeaters that gnaw at its roots.

Biomutant is a gorgeously designed game full of vibrant colors and awe-inspiring landscapes.

The game uses that setup to create some rich and creative world building. Biomutant is packed with narrative details, lore, and charming characters. There’s a real sense that the planet has naturally rebuilt itself into something new following humanity’s collapse. We get an in-depth look at the world’s political struggles through warring animal factions, splashes of colorful folklore passed down between generations, and the spiritual side of these creatures.

Traces of humanity still poke through. Decaying cities feel like the kind of ancient ruins of civilization’s past that we find in our own world. Part of the fun is seeing how the game transforms basic human products into primitive artifacts. A children’s beanie becomes a piece of headgear or a washing machine becomes a dial-turning puzzle. It’s a game that just has a blast imagining how other races would interact with the world humans left behind after extinction.

What really drives its world building home is, well, it’s world. Biomutant is a gorgeously designed game full of vibrant colors and awe-inspiring landscapes. The best example of that is the Tree of Life, a gigantic tree that sits in the dead center of the map. It’s massive roots branch out in four directions. It’s both a useful navigation tool that subtly guides players to their main objectives and a striking visual that’s just plain pretty.

Open-world games live and die by how much players feel like they want to actually explore that space. At every turn, I wanted to curl up in Biomutant’s grassy hills like a cat and watch the sun set.

As far as action RPGs go, Biomutant really works hard to balance both sides of the genre equation. It’s a combat-heavy game that’s built around close-range slashing, long-range shooting, and combos that bridge both skills. Its battles get repetitive after a dozen hours when spongey enemies become more frequent (I found that I was spamming one combo by the halfway mark), but it provides several tools to tinker with that add variety. There are different weapon types, Assassin’s Creed-style special abilities that are assigned to buttons, and unlockable skills.

The most interesting part of the battle system comes from its weapon-crafting system. Players can build their own melee weapons using parts they find in the world. I spent a lot of time mixing and matching pieces to create hilarious blades, like a tiny dagger on a giant sword hilt. That doesn’t change the flow of combat much, but it at least adds an addictive customization layer that produces comedic results.

The RPG elements are really where it shines, though. There’s a real sense of character building every step of the way. There are tabletop-style classes and stats that can buff attack power or make players better at bartering with merchants. Loot is plentiful and brings some wacky (but practical!) fashion to the mix. There’s even a resistance system where players can buff their ability to withstand elements like heat and poison to make it through dangerous territory.

The RPG elements are really where it shines.

The best way it uses its RPG systems is in its tribal war quest. At the start of the game, players will ally with one tribe and try to unite or defeat the rest. The game gives players full freedom in how they want to tackle that challenge. They can try to conquer every single tribe in battle or forgo combat entirely and try to broker peace. I managed to do a little of column A and column B, breaking into strongholds and leaning on my charisma to try and form an alliance.

It’s not always quite that in-depth. Character interactions outside of that arc can feel shallow by comparison with few, if any, options for how other quests are handled. Those moments where the combat and RPG systems are working together, though, create an adventure with a personal touch.

Pushed to the limits

At first glance, it’s hard to believe that Biomutant was made by a 20-person team. It features the kind of giant world one might expect from a Ubisoft game with a giant staff. The deeper I got, the more the seams started to show. Assets are recycled regularly, with some interiors looking indistinguishable from others. There’s a load of repetitive “map game” busy work that’ll have players doing the same thing frequently, including an endless wave of dial puzzles. Every single line of dialogue is spoken through a single narrator who’s so tiresomely ever-present that the game features an entire slider dedicated to reducing how much it speaks.

Boss fights are generally rough, too. The set-piece driven battles are generally built around some big tool to differentiate them and make them feel bigger, but they often come off a bit sloppy. I usually found myself struggling to tame unwieldy vehicles in battles that always felt one bug away from collapsing.

I ran up against frequent crashes during my playthrough on Xbox Series X as well. While that will hopefully be ironed out for the final release, that sense of general instability butts heads with a world that begs to be fluidly explored.

The deeper I got, the more the seams started to show.

Again, all of this is understandable considering the size of the development team versus the scale of the project. It’s undoubtedly an ambitious game that doesn’t always have the resources to handle its weight. But through all of the frustration, I’d always find some inventive piece of the world that would bring a smile to my face.

There’s a lot of potential in Biomutant as a franchise thanks to all the narrative groundwork in place here. It serves as a strong proof of concept for developer Experiment 101, which is as scrappy and resourceful as the creatures it has created.

Biomutant is a clear labor of love that’s loaded with imaginative world building. The in-depth character customization options create a more personalized kind of action RPG. It’s eyes are often bigger than its stomach, which can often result in a repetitive, at times unstable experience. Even with those flaws, it’s hard not to be charmed by a kind-hearted project with some environmentally conscious storytelling.

The Legend of Zelda: Breath of the Wild is still the open-world gold standard and recent games like Ghost of Tsushima offer a cleaner experience for the same price point.

The main campaign can take around 20 hours, but reaching 100% completion will likely take closer to 60.

Yes. If you can deal with some rough edges, there’s a colorful world full of charm here that’s worth exploring.

Topics
Everything we know about Biomutant
District 9 director made a live-action trailer for Anthem, and it’s pretty cool
‘Project Z’ is a new Dragon Ball action RPG that retells Goku’s origin story
‘Darksiders III’ gets its own Fury-led ASMR series, and it’s weird
How to fast travel in Forspoken
Star Wars Jedi: Survivor will now release in April following delay
How to get the Silver Card in Fire Emblem Engage
One Piece Odyssey’s great ending would have made for a perfect anime arc
Don’t need the Xbox Series X? The Xbox Series S is $50 off today
Tomb Raider returns as a mobile roguelike via Netflix
Samsung’s 49-inch Odyssey G9 gaming monitor is $600 off today
Rode’s NTH-100M headphones are built for gamers
The best upcoming Xbox Series X games: 2023 and beyond