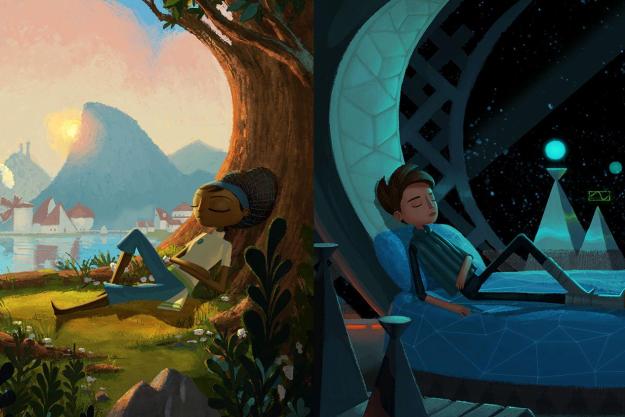 “Broken Age: Act I is a two-pronged success: it's a vintage Schafer adventure with a meta layer that comments on the game's crowdfunded roots.”

Broken Age: Act I – the game once breathlessly referred to as “Kickstarter sensation Double Fine Adventure!” – only exists because it bucked the system. From the moment it turned a $400,000 crowdfunding target into more than $3.3 million pledged by excited fans, it represented a disruption of everything we’ve come to know about video game publishing. The enthusiasm was enough to encourage Tim Schafer and his team at Double Fine Productions to go big, so big, in fact, that Broken Age had to be split in two, with Act I out now and Act II to follow later this year.

That’s the story you know, the one that the games press has been squawking about since March 2012. The story you don’t know, the one in the freshly released Broken Age that you’re ostensibly reading this review to get a sense of, is also about people trying to buck the oppressive system that they’re stuck in. Two characters, two storylines, two journeys focused on breaking free of established norms and finding a Better Way. There’s a connection between them, but that’s not important right now.

Broken Age: Act I … only exists because it bucked the system.

On one side there’s Vella, a young woman born with a death sentence. Vella’s seemingly idyllic world is host to mass murder event every handful of years when the mysterious beast Mog Chothra appears from points unknown to accept human sacrifices from each town. These “Maiden’s Feast” celebrations, as they are known, are revered by the celebrating communities, which offer up their most fetching women to placate the beast. Vella is to be presented to Mog Chothra in the Feast that’s about to kick off when the story opens, but it turns out that she’s not so keen on the idea of being eaten by a gigantic monster.

On the other side there’s Shay, the captain and lone human resident of a spaceship that’s charged with righting wrongs throughout the cosmos. It sounds great and noble, and maybe even a little bit dangerous, but it quickly becomes clear that Shay’s freedom is an illusion. His ship is designed to keep him safe, and the “missions” he’s sent on are fluff. What seems like a dangerous scenario turns out to be an excuse to eat ice cream, or weather an ambush by nauseatingly cute hug monsters. Shay may be safe, but he’s bored and unhappy. Furthermore, he has absolutely no idea why he’s stuck here, beyond a computerized “Mom” AI telling him that he’s important.

Players are free to explore the Vella and Shay stories with no restriction. You choose one or the other when you first fire up the game, but switching is as easy as bringing up the inventory menu and clicking the character portrait in the bottom right corner of your screen. What’s more, the revelations in each story are additive. Whether you play one all the way through and then the other, or switch back and forth with each new scene, there’s a strong script to support your decision. Scattered through each of the stories are little hints and nods that seem to reference the other, but the two plots are inextricably tied to one another. By the time you find yourself dangling from a metaphorical cliff in the final moments of Act I, the cleverness of this dual-story approach becomes clear.

The actual gameplay is traditional point-and-click adventuring. Veterans of Maniac Mansion, Full Throttle, The Secret of Monkey Island, and their ilk should be able to jump right in with the entirely contextual cursor. There’s no tutorial to speak of, but failure isn’t really built into Broken Age‘s systems. You can move, you can look at and interact with things, and you can click-drag items out of the pop-up inventory menu to use them in the world. It’s designed to allow you to figure out how everything works after a few minutes of fiddling.

As is so often the case with these types of games, the puzzles are solved using a mix of grounded, rational puzzle-solving, and frantic “maybe this goes here?!” experimentation. To Double Fine’s credit, Broken Age relies much more on the former than it does on the latter, but sharper players may find that everything feels just a bit too easy. The red herrings meant to distract you are relatively few in number, which means much of your march through the game is a process of finding which proverbial peg fits in which proverbial hole.

Not that that’s entirely a bad thing. It’s a joy to explore both of these stories thanks to the gorgeous art design. Broken Age plays like a living children’s book, with hinged papercraft-inspired characters that seem to rest on top of visually busy, pastel-heavy environments. Each new scene feels like you’ve turned to a fresh page in a pop-up book. You could clip out any random moment and print it large to hang on your wall. It’s that pretty.

The voice performances do justice to the story for the most part, but Shay (voiced by Elijah Wood) and Vella (voiced by Masasa Moyo) both could have used a bit more direction. They’re fine when the script has a clear course to follow, emoting and infusing nuance in all the right places. The stumbles are evident in the less scripted bits, the moments when you’re free to ask a string of questions for background info in any order you like. These readings from the two stars feel lifeless, as if they’re merely words read off the page. It doesn’t shatter Broken Age‘s wonderful illusion, but it’s the rare fault in an otherwise flawless adventure game.

The real standouts in this first act are the supporting characters. Whether you’re gleefully abusing an angry, sap-spewing tree or matching wits with a cult leader crackpot who floats in the clouds, every encounter is memorable. Double Fine’s trademark deranged humor is evident, if slightly muted. There is LOL-inducing comedy in this game, but make no mistake: Broken Age: Act I is more charming than it is funny. Monkey Island this is not, at least as far as the focus on comedy goes. It doesn’t work against the game – charm and comedy are complementary, after all – but it’s a facet of the execution that longtime fans would do well to remember.

Double Fine did it. Yes, there’s still one more act to go before this whole thing is technically “complete,” but the $3.3 million crowdfunding success paid for one helluva half-game. The studio effectively skirted around traditional game publishing models, and then seized the opportunity to tell twin stories that focus on people bucking long-established systems. It’s clever in a delightfully self-referential way, with everything further colored by the studio’s trademark zaniness. Broken Age: Act I is at once a declarative commentary on Double Fine’s precedent-setting approach to publishing and the vintage Schafer adventure we were promised.

This game was reviewed on an Alienware X51 gaming PC using a backers-only copy of the game that was purchased by the author.

Topics
Video-editing app LumaFusion to get a Galaxy Tab S8 launch
The Last of Us Part I remake: release date, trailers, gameplay, and more
Dragon Age 4 is in production, but nowhere close to release
The best Metroidvania games on Nintendo Switch
The best games like The Legend of Zelda
Starship Troopers: Extermination turns sci-fi satire into a co-op shooter
Score $90 off an Alienware gaming chair for Cyber Monday
How to get Battle Tokens in Warzone 2.0
How to redeem Mystery Gifts in Pokémon Scarlet and Violet
Call of Duty: Warzone 2.0 desperately needs to give players more health
Don’t miss this Xbox Series S Cyber Monday deal — ends midnight
Now’s the perfect time to stock up on PS5 controllers
How to evolve Tandemaus into Maushold in Pokémon Scarlet and Violet