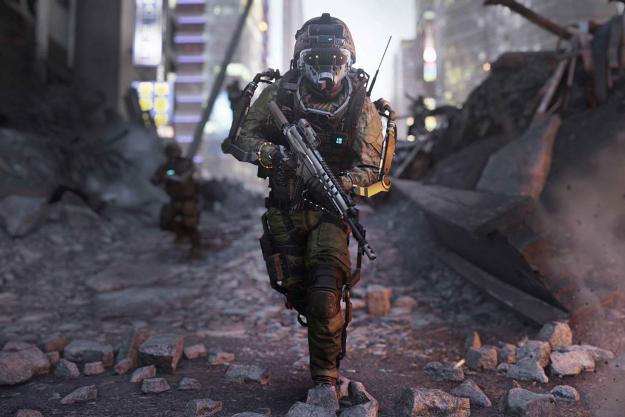 “Blockbuster” doesn’t have to be a dirty word. It was a fresh idea back in 1975, when Steven Spielberg’s shark-and-awe suspense flick Jaws coined the term by becoming a national conversation. But it’s more of a scarlet letter now, defining a category of entertainment that appeals to the lowest common denominator. Blockbusters may be thought of as box office-breakers, but fundamentally? They’re just stories that get us all talking.

Boy oh boy is there a lot to talk about in Call of Duty: Advanced Warfare – the latest in the blockbuster action series. After skating along for the better part of the last decade, propelled by the evolutionary success of 2007’s Modern Warfare, Activision finally unhooks the chain and lets developer Sledgehammer Games go wild with exoskeletons, hoverbikes, and laser beams. It’s future-world warfare for a futuretech-obsessed world. Now we’re talking.

Mitchell loses everything, finds hope, sees the truth for what it is, and finally makes the Right Choice.

Advanced Warfare is anchored by its most coherent campaign mode in ages, possibly ever. After losing both a best friend and a left arm in battle, honorably discharged Marine Private Jack Mitchell (Troy Baker) is offered a new outlet for his aggression. Jonathan Irons (Kevin Spacey), father of Jack’s slain pal, has an opportunity: A billion-dollar prosthetic arm and a job with Irons’ privately owned military force-for-hire, Atlas.

In a loose three-act structure that spills out across the standard six-to-eight hours of campaign play, Mitchell loses everything, finds hope, sees the truth for what it is, and finally makes the Right Choice. It’s an arc that makes actual sense, beginning to end. Mitchell goes from soldier to contractor to resistance fighter, and the reasons are clear all the way through. Simple, easy to follow, affecting.

Credit two creative choices for that success: The decision to stick to a single protagonist throughout the story, and to give him a voice, both firsts for the series. It’s a somewhat restrained voice, one that only speaks during cutscenes and never pipes up while you, the player, are in control. But it works. Sledgehammer tethered its story to a single human, a single perspective, and it makes all the difference. You care about Jack’s struggle because you understand it.

The campaign is also as successful a roller coaster as Activision’s realized for this series. Linear to the last, and all the better for it, Call of Duty may have at last transcended the shooter in its “first-person shooter” genre. For all of the bodies that stack up at your feet over the course of the A-to-B progression through the campaign, the gunplay is more of a function than a focus.

Tech is the real star. Military futuretech, so yes, plenty of shooting, but it’s a means to an end. Advanced Warfare‘s most energizing set pieces are built around powering players up, with lethal chaingun-equipped mechs and swarm rocket-firing tanks lumped in alongside zippy grapple guns and nifty active camouflage.

Here’s your toy, here’s how you use it. Now show us what you can do.

The campaign feels like a set-piece grab bag in that sense, its design informed primarily by the toys that define each sequence. You’re taught how a thing works and then given the opportunity to use it, with few constraints. Active camo is introduced in a series-standard follow-the-leader base infiltration, but a subsequent stealth mission asks you to apply what you learned to a looser pre-ordained path. Here’s your toy, here’s how you use it. Now show us what you can do.

It’s a marvelous give and take that powers you up before giving you the freedom to perfect your new skills in a war-torn playground. The shooting is simply a byproduct of the fact that all of these toys are forged for battle. It’s important to learn how they all work too, because the same advanced military technology pumps fresh blood into the beating heart of Advanced Warfare‘s evolved online play.

Competitive multiplayer is enhanced by the addition of everything from directed energy guns (i.e. lasers) to boost-assisted dashes and jumps, powered by weaponized exoskeletons (Exos). There’s a new emphasis on speed and mobility embodied by these Exos. High-flying jumps and reflexive dodges open up brand new tactical possibilities. The twitchy play is strong with this one; shoot first, ask questions never.

A completely revised custom loadout builder, modeled after Black Ops II‘s wonderful Pick 10 system, offers heretofore unseen flexibility. Loadouts now include Exo abilities and modifiable Scorestreaks (maybe you’d rather your remote turret fire rockets instead of bullets?) as well as weapons, grenades, Perks, and Wildcards. Not good enough to earn Scorestreak rewards? Lose ’em! Use the extra loadout “budget” you get from that sacrifice to gear up with more explosive firepower instead.

You care about Jack’s struggle because you understand it.

All of this change comes at a heavy cost: There’s a steep learning curve. Advanced Warfare is extremely unfriendly to the newcomer, with busy, text-laden menus that aren’t explained well and speedy play that is difficult to keep pace with. The campaign is a worthwhile training ground, but it’s hard to apply lessons and feel progress being made when crack human snipers are gunning you down seconds after a respawn.

It’s an issue of matchmaking, really. In fairness, this isn’t a new problem for Call of Duty. Growing eSports popularity for the series has led to online lobbies crowded with pros-in-training. But the steep learning curve in Advanced Warfare highlights the skill disparity in a major way. The game is simply not good at putting players of competitive skill levels into the same lobbies. Black Ops II addressed this with League Play, but Advanced Warfare doesn’t have any hooks aimed at giving pros their own space.

That’s not to say multiplayer is without hooks. You still earn XP and level up as you go, and you still unlock toys to play with along the way. New Supply Drops amount to loot chests, earned for completing challenges, that gift players with gun variants, in-match support drops, and cosmetic customization items. The persistent progression-driven framework that made the first Modern Warfare such a success is still here, it’s just frustrating to engage in an online space that takes such an apparently haphazard approach to matchmaking.

Exo Survival, Advanced Warfare‘s obligatory cooperative mode, is also a disappointment. Where futuretech fuels a fresh take on the series’ campaign mode, it does the opposite in co-op. Exo abilities feel tacked on in this wave-based survival rehash from Modern Warfare 3. Instead of growing and evolving as Treyarch’s Zombies mode has since it debuted in World at War, Exo Survival feels like more of the same. It’s a distraction, out of place in a game that otherwise demands investment.

After an explosive shift in 2007 that established Call of Duty 4 as gaming’s Jaws, the series settled into a “more of the same” malaise that, for years, hewed closer to the mindless, soulless Bayhem of the Transformers movies. Advanced Warfare steps confidently back into the spotlight, with Sledgehammer finding fresh ways to innovate on the necessarily derivative play.

Just as there can only be one Jaws, there will only ever be one Call of Duty 4. But Advanced Warfare serves as a loud-and-proud reminder that blockbuster status is more than just a sales figure.

This game was reviewed on an Xbox One using a code provided by Activision.

Topics
Every video game delay that has happened in 2023 so far
Forspoken settings: change these settings for a better experience
Best Gaming PC Deals: Save on RTX 3070, 3080, 3090 PCs
Marvel Snap Battle Mode: How to play Marvel Snap with friends
How to get all Emblems in Fire Emblem Engage
Fire Emblem Engage bond levels: how to get max Bond Levels fast
The best video game remakes reinvent the classics, they don’t just revisit them
Best Buy will give you a $10 to pre-order Hogwarts Legacy today
Save $620 on this Lenovo gaming laptop with an RTX 3070
AMD vs. Intel: which wins in 2023?
Add 2TB of storage to your PS5 with an SSD and save $70 with this deal
Fall Out Boy concert in Fortnite: start time, island code, and more
Marvel Snap is dangerously close to becoming a pay-to-win game