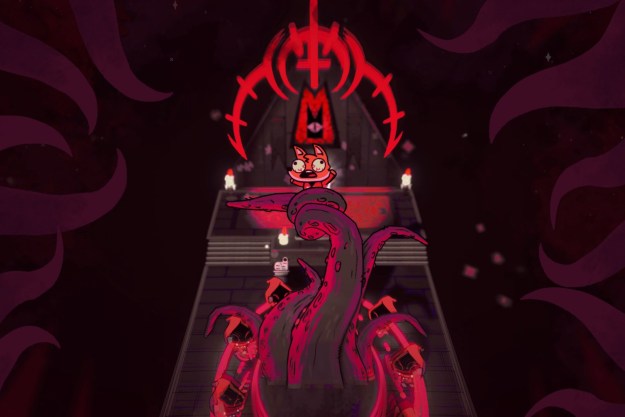 “Cult of the Lamb excels as a darkly comedic management game, though its roguelite component commits some cardinal sins.”

For a good chunk of my Cult of the Lamb playthrough, I was a perfect leader. My flock of woodland cultists was living in harmony, merrily showing their devotion to a monstrous god. Then came the lumber shortage. Within a few days, dissent started to stir in my ranks as I was unable to fix broken beds. By the time I harvested enough wood to fix the problem, I needed to use it to construct a prison instead. It turned out that the line between paradise and nightmare was mighty thin.

Cult of the Lamb explores that balancing act through a darkly comedic premise pulled straight from the golden age of the company Newgrounds. It’s a hellishly addictive management game that revels in its religious farce like cultists prancing around a bonfire. But like my uneven stint as a leader, it struggles to fully pull off the complex genre juggling act it sets out to achieve.

A much better management sim than it is a roguelite, Cult of the Lamb is at its best when it’s a bizarro world version of Animal Crossing (with more satanic rituals). I just wished I could order my followers to do my dungeon crawling chores for me.

In Cult of the Lamb, players take control of an innocent lamb who gets suckered into running a cult for a chained god. The woolly hero is tasked with building a functioning commune, converting other animals into followers, and killing four rival gods that are keeping its master imprisoned. It’s a zany premise that just so happens to be a perfect management sim setup, one that’s loaded with interlinking economies and strong progression hooks.

As my followers generated devotion by praying at my camp’s central shrine, I could use that resource to unlock structures that could be built with the wood and stone lying around. Within an hour, I had some rudimentary beds for my followers, farm plots to grow food, a cooking station, and a temple to preach from. Like an effective preacher, Cult of the Lamb is always teaching something new, slowly making the daily routine busier without feeling suddenly overwhelming.

Every decision plays an important role in the camp. Installing an outhouse stops followers from pooping in the grass, which can sow discontent among easily grossed-out animals. Once set up, that waste can be collected from the bathroom and used to fertilize crops. Those crops turn into ingredients that can be used to cook meals, keeping everyone fed and happy — unless you decide to cook a meal with that feces instead. That level of intricacy runs through every system, allowing you to create a functional (or dysfunctional, if you so choose) society.

What’s especially impressive is that this is only one layer of the management sim. On top of those usual city-builder hooks, the game’s religious premise brings extra depth. You’re not just managing living conditions and hunger; you’re trying to max out your flock’s devotion and harvest it like a resource. Perform a sermon and you’ll get currency that lets you buy permanent upgrades for the game’s combat section. Hold a ritual to bless the ocean and you’ll be able to get a larger haul when you go fishing (conversely, you can declare a fast, which will lower the commune’s devotion but keep them from going hungry as it freezes their hunger meter). Faith is as much of a resource as wood, which is perhaps the game’s toothiest morsel of religious satire.

My favorite piece of the game’s vast web of systems comes in the form of doctrines. After collecting three tablet shards, players get to put a new law into motion. That lets them shape what kind of cult they want to run, whether it be benevolent or fearful. In my cult, I decreed that my followers would be grass eaters, allowing them to eat meals made of grass without making them question their devotion. Later, I decreed that I could shake followers down for a tithe any time I wanted. Each decree riffs on different cult tropes, adapting them into impactful (and darkly hilarious) gameplay decisions.

That’s not even the bottom of the barrel. I could go on about villager traits, quests, perk-granting necklaces, and more. For something that looks like a cartoon gimmick, Cult of the Lamb surprisingly stands hoof-to-hoof with more “serious” systems-heavy games like Frostpunk.

If the management sim is an angel on Cult of the Lamb’s shoulder, its rouglite element is its devil. There’s an action component at the center of the game, where players set out on expeditions to kill those four gods. Like other games in the genre, players fight through a procedurally assembled set of rooms to slay one boss at a time. But like gardening or mining for stone, it’s more of a chore than anything.

There aren’t many compelling tests of skill in a run, even in boss fights.

When I say “roguelite,” the emphasis is on the lite. Rather than doing one big run, players complete easy micro-expeditions that usually take five to 10 minutes to complete. That’s great for people who find games like Dead Cells too imposing, but it limits the appeal of the genre. For instance, much of the thrill of games like Hades comes from experimenting with builds each run. Cult of the Lamb’s runs are so short and devoid of meaningful perks that I never got the feeling that I was constructing a powerful toolset. Tarot cards, the game’s version of relics, tend to only grant dull boosts like adding a half heart of health or upping attack strength by a hair.

Weapons are similarly lacking. There are a few weapon types in the game’s pool and some classes to unlock (like vampiric weapons), but nothing really changes the way I approach a room. Every single one is a close-range melee weapon that has me hammering the X button to let out the same short combo. The only difference is weapon speed, with slower weapons simply feeling disadvantageous due to enemy attack speed.

There aren’t many compelling tests of skill in a run, even in boss fights. Whether it’s a sub-boss or the big bad of a biome, fights are matters of simple pattern recognition and bullet-hell dodging. That makes the game much more friendly for people who hate bashing their head against a wall, but it’s lacking a good counterbalance to keep runs interesting. After dozens of runs, I wished I could find a way to assign a follower to do the dirty work for me.

I wouldn’t describe any of this as bad; it’s perfectly fine hack-and-slash gameplay. It just pales next to the intricate cult management, feeling like a tithe you need to pay to enjoy the game.

Cult of the Lamb’s most immediately notable feature is its cartoon art style, which almost makes it look like a grown-up flash game. The colorful and cuddly visuals give the game its demented dark edge à la Happy Tree Friends. It’s an easy to adore aesthetic, though I did find that the almost Paper Mario-like look made it difficult to gauge enemy hitboxes during battle.

I wish the experience had more teeth as a work of satire.

The cute visuals make for some fun dissonance when performing a blood sacrifice, but I wish the experience had more teeth as a work of satire. Despite all the references to cult clichés, the game never has much to say about the thing it’s lampooning. It’s mostly played for easy sight gags, which is surprising considering that it seems to have a real bone to pick with blind devotion. The central story heads toward a pretty obvious conclusion from the get-go, one that almost absolves players of any sins they’ve committed along the way.

There’s still that inherent religious satire to its resource management, but it almost feels more effective as a darkly comedic Animal Crossing parody. Are the two games so different? Both have players making a cozy village for adorable woodland creatures, decorating the town to raise happiness and declaring ordinances. The only difference is the presence of god, which distorts the happy-go-lucky paradise into a Midsommar-type situation.

Cult of the Lamb could have dug the sacrificial knife in a little deeper, but it still gets enough of the jugular.

Cult of the Lamb excels at delivering a multilayered management sim that uses its cult premise as much more than a twisted gimmick. It’s only let down by its middling roguelite gameplay, which seems to miss what makes the genre so appealing. Its satire could stand to be more direct, but it still takes enough pointed stabs at religious cults by turning devotion into an expendable resource. Pearls will be clutched.

If you want a genre-bending roguelike that gives you more to do between runs, Hades is the gold standard. Moonlighter also fuses rouglite action and management fairly well.

That depends on which difficulty level you pick, but a medium playthrough took me around 12 hours to complete.

Yes. Even if it doesn’t nail the roguelite genre, Cult of the Lamb is an addictive management game for the heretics out there.

Cult of the Lamb was reviewed using a PC version running on Steam Deck.