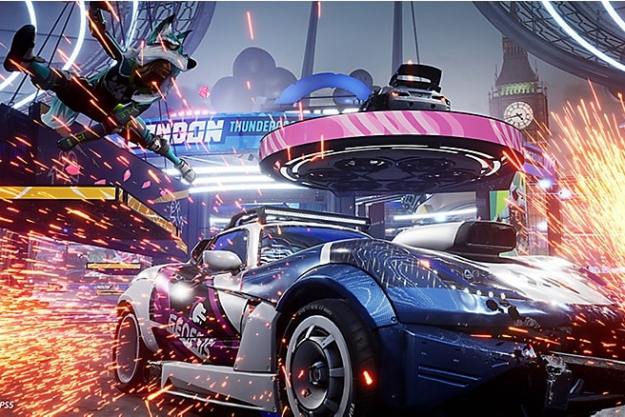 Destruction AllStars is a chaotic video game, but probably not in the way Sony intended.

The hyper-stylized vehicular combat game is full of monster-sized cars, loud crashes, and bright colors. It also contains a 50-car pileup of ideas all built to take full advantage of the PlayStation 5’s unique features. From haptic feedback to integration with the console’s card feature, there’s a lot happening under the hood of this month’s PS Plus freebie … so much so that the game’s developer is already walking some of it back less than a week in.

The core idea behind Destruction AllStars is simple: It’s a multiplayer demolition derby where players into other cars to amass points. It takes the smash-em-up gameplay of Burnout, but removes the actual racing component. When it comes to the basics, Destruction AllStars gets a lot right. The familiar driving controls make it easy to pick up and play from the get-go. On top of the standard abilities to accelerate and break, players can perform a by either flicking the right control stick up or to the side, making it simple to dole out big hits in a way that feels intuitive.

The cars feel fast and can make sharp turns thanks to a handbrake, which allows for some high-speed fun. Knowing an opponent is on your tail and quickly outmaneuvering them to avoid a collision is a simple pleasure. Likewise, the crashes themselves are just plain joyful. There’s a real sense of weight every time two cars collide, with metal flying in every direction and a satisfying crunch to emphasize the slam. In the game’s single-player mode, there’s even a satisfying slow-motion breakdown to really drive it home.

The problem is that it has trouble finding the right framework for those strengths. The online Mayhem mode does the best job, tossing players together in a free-for-all where whoever destroys the most cars wins. It wears thin, but it best delivers on the game’s demolition premise with constant chaos.

The crashes themselves are just plain joyful.

The other multiplayer modes can’t quite shift into full gear. Gridfall is the game’s elimination mode, where players try to outlast one another in a rapidly shrinking arena. Placing in the top two is as easy as getting out of a car and climbing up to a raised platform while everyone else fights. The game doesn’t penalize players for just waiting it out, offering little incentive to do anything until it’s down to two players.

There’s Carnado, too, which tasks players with grabbing gears and banking them in the center of the arena, similar to Destiny 2’s Gambit mode. Stockpile, the game’s very confusing spin on a zone control mode, requires getting on foot to collect gears. The objective-based play offers something more to do, but nothing really capitalizes on the chaos as well as Mayhem, making it feel like a one-playlist affair.

The game really gets off track when it adds more to the mix. Like Overwatch, Destruction AllStars features unique characters that each have their own special car and abilities. The roster itself is a wonderful motley crew of eccentric characters that includes everything from a hunky luchador to a cat-obsessed e-girl.

The designs are charming, but the actual character system is lacking. At any point, players can eject from their car and parkour around the map. While on foot, players can try to take over enemy vehicles or pick up crystals to charge a special ability, called a breaker. The problem is that there’s never any good reason to be out of a car. There’s no real benefit to climbing around, and none of the on-foot abilities feel like they do much of anything. Any time I activated my breaker, it was strictly just to boost my speed so I could get back in a car faster. Imagine if Titanfall gave players the option to hop in and out of their mech at any point. Why would you ever leave?

All of the added layers end up feeling superfluous.

Vehicle hero abilities aren’t terribly compelling either. Each car gets a different “super,” which includes everything from a stealth cloak to a ramming hull. During my time with the game so far, none of those seem to be huge difference makers in matches. I barely notice when an opponent is using their special ability unless it’s something visual like Feugo’s flaming car. Most of the time, I forget to activate mine, and it doesn’t impact me in any noticeable way.

All of the added layers end up feeling superfluous. Rather than giving the game extra depth, they’re a distraction that takes a simple premise and overly complicates it.

The gameplay itself is middling, but Destruction AllStars contains a handful of head-scratching choices that completely stall it out. Some of those are subtle. There’s no music during online matches, which makes everything feel bizarrely quiet  — how does a game with this much style not boast a killer soundtrack? The onscreen text is also illegible across the board, with no options to increase anything. It’s as if the game was developed on an IMAX screen.

The haptics, trigger feedback, and sound effects from the DualSense’s speaker are constant and often distracting.

Other decisions are harder to ignore, like the game’s overbearing microtransactions. The game features both an in-game currency and a premium one bought with real money. The latter can be used to unlock the game’s single-player challenges. It also features a truckload of purchasable cosmetics. Some of them cost in-game coins, but others require real money on top of that. Considering that the game was originally going to be a full retail launch release, it feels like Sony slapped a paywall onto features after the fact to quickly flip the monetization strategy.

The most frustrating part regards features specifically built around the hardware. If Astro’s Playroom showed how much can be done with the unique tech, Destruction AllStars shows how it can be taken too far. The haptics, trigger feedback, and sound effects from the DualSense’s speaker are constant and often distracting. Whenever your car is in rough shape, the triggers vibrate with a loud, clicking rattle that’s grating.

Developer Lucid Games has already started walking some of the game’s worst features back. Originally, voice chat was always on by default, with all audio coming through the DualSense speakers. The controller’s built-in microphone was also always on, meaning that players were unexpectedly sharing their audio whenever they played. There was no in-game option to disable any of it initially. Instead, players had to open the PlayStation menu and disable voice chat manually every single round. Just 72 hours later, voice chat has now been disabled entirely.

There’s a good chance that Lucid Games will rework the game’s most puzzling decisions as its community weighs in. Fortnite wasn’t built in a day, after all. The question is just whether or not it can do it fast enough to keep up with a crowded free-to-play market that’s an unforgiving demolition derby in its own right.

Destruction AllStars has a sturdy engine, but it’s overworked in almost every respect. The needless on-foot component and character abilities clutter an otherwise light but fun pick-up-and-play game with satisfying wrecks. Toss in some overeager DualSense support, and the result is a multiplayer game that’s chaotic for all the wrong reasons.

Codemasters’ Onrush contains many of the same ideas, such as character abilities, in a much more focused package.

It’s a multiplayer game, so that depends on the player, but the shallow gameplay wears thin pretty fast.

No. If you aren’t a PS Plus subscriber, there’s no real reason to. If you are, there’s never any harm in downloading a free game.

Topics
The best PS5 headsets for 2023
The best PSVR games for 2023
PS5 themes: Can you customize your homescreen?
PS VR2 games: launch games and what’s coming later
The best skills to inherit in Fire Emblem Engage
Dead Space: how to fix the centrifuge
How to fast travel in Forspoken
Star Wars Jedi: Survivor will now release in April following delay
How to get the Silver Card in Fire Emblem Engage
One Piece Odyssey’s great ending would have made for a perfect anime arc
Don’t need the Xbox Series X? The Xbox Series S is $50 off today
Tomb Raider returns as a mobile roguelike via Netflix
Samsung’s 49-inch Odyssey G9 gaming monitor is $600 off today