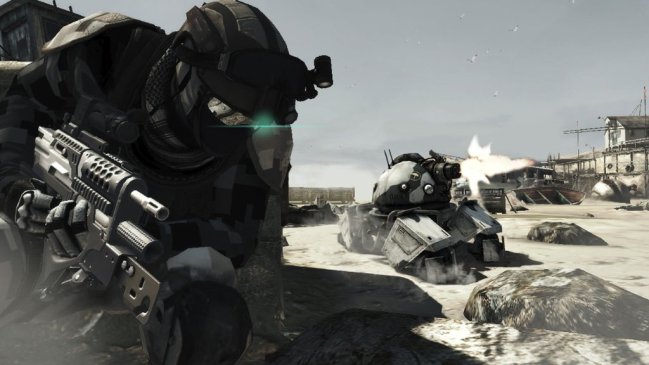 Ubisoft is promising an early 2012 release, and rumors of a January target date have been bandied about–whether or not that is accurate, a Q1 release is the plan. But while the game may not be on shelves until next year, Ubisoft did have a demo of both the single player and multiplayer game available at E3.

Future Soldier looks amazing. It looked better last year when the Frostbite 2.0 and id Tech 5 engines were just gaining momentum, but the heavily modified YETI engine is still producing some of the best graphics available on a console.

As with the previous Ghost Recon games, Future soldier is a team-based tactical shooter. It is a third-person shooter with the occasional switch to first-person for specific events. You command a group of three other soldiers and can give them targets, send them to certain locations and team up with them to do things like breach and clear a room. Tactics are the primary focus, but there is also still room go Leroy Jenkins and play the game like a more standard shooter. It will make your life harder, and there are some objectives that you need to do silently, but you make that call. The enemies are smart and tough, and you don’t just shrug off bullet wounds.

Helping you with the stealth aspect, and a feature that will define the game, is the “optical camouflage” ability that has been displayed prominently in all the promotions for the game. When you are moving unseen, you will be partially invisible—but only partially, and you can still be seen if you run down a brightly lit street surrounded by guards. It also has a limited power supply, so it cannot be used all the time.  In the game, the suit is considered to be a prototype, so while it will give you a significant advantage it is nowhere near infallible, nor is it something you can totally rely on.

The series also introduces controllable drones, which you can use in a variety of ways. But one of the more incredible features is the weaponsmith. The weaponsmith is to weapons customization what Gran Turismo 5’s garage is to car customization. Every piece of the weapon can be customized. Every piece. You can also allow the weaponsmith to help you to customize for certain scenarios, or just based on your preferences. If you want a special weapon for close quarters combat, the weaponsith will help you find the ideal balance. The same goes for long range or for a more balanced weapon.

The demo showed a level from the campaign in Nigeria, where your team is sent in to rescue a hostage. As you move through the streets, assigning targets for coordinated kills is essential. To do that, you simply target an enemy and press a button to mark them for a teammate. You can assign all three members to three separate targets, and they will wait for you to fire first then follow.

Moving through the streets and taking out enemies quietly, you will eventually use your cover ability to position yourself outside of an oil refinery. Using a line of sight, you can move from cover to cover quickly and efficiently to gain position thanks to this mechanic. If you like, you can move slowly and time it so that you can target each guard and take them out while the others aren’t looking. Or you can do what I did and start off by throwing several grenades at them to properly introduce myself.

The cover system is similar to many other games, but you can’t use it for long. The environments are partly destructible, and hiding behind a concrete wall will only be a good idea for a few moments. The enemy AI will also do everything it can to flank you, and barring that, they will fall back to better cover.

Once you make it to the hostage, you then begin something of a brief escort mission as the enemies converge.

The gameplay is smooth and fluid, and the futuristic tools are interesting and fun to use. Thankfully there is a balance though, which means you can’t just use the cloak throughout, you need to think your way through the game tactically.

One of the less publicized but cooler features of the campaign is that it is completely online compatible. So while you are playing through the story at your pace, you can invite your friends to join you for up to a four person co-op campaign. If a friend needs to drop out, they can easily, and the AI will take control. Ubisoft promises that jumping in and out of the campaign will be seamless.

The multiplayer was also on display, and the gametype being showed was an objective-based mission, with targets that need to be destroyed–similar to Battlefield’s rush game. The details on the multiplayer are still somewhat vague, but there will be plenty of ways to level up, multiple weapon choices, and plenty of gameplay options.

With a campaign that already looks impressive, the inclusion of the insanely intricate weapons customization and the online mode that will allow both campaign and multiplayer games makes Ghost Recon Future Soldier one of the best looking games at E3. Hopefully for the last time.

E3 isn’t dead just yet as ESA plans physical show for 2023
Ghost Recon Breakpoint support ends months after NFT drop
With E3 2022 canceled, these are the summer gaming events to watch
Nintendo is ending Wii U and 3DS eShop service
The best SSDs for 2023
WWE 2K23 brings the pain with John Cena, Cody Rhodes, and Bad Bunny
The best gaming PCs for 2023: Dell, Origin, Lenovo, and more
You can turn off Frey and Cuff’s banter in Forspoken
The best Xbox Series X and Series S deals for January 2023
This Alienware gaming PC with an RTX 3090 is $520 off right now
NBA All-World aims to replicate Pokémon Go’s success starting today
This samurai strategy game is my new deck-builder obsession
How to connect an Xbox controller to a PC