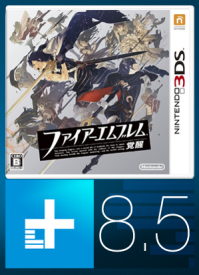 Retired Lieutenant General Jerry Boykin is one of the louder voices opposing the Pentagon’s recent decision to allow women in the United States military to serve in combat positions. “The combat environment—now containing males and females—will place a tremendous burden on combat commanders,” says Boykin, “Not only will they have to maintain their focus on defeating the enemy in battle, they will have to do so in an environment that combines life-threatening danger with underlying sexual tensions.” Lt. Gen. Boykin has clearly never played Fire Emblem: Awakening.

Intelligent Systems’ strategy game is founded on the idea that friendships, and especially those between the sexes, make for the best fuel for soldiers. Making personal relationships central to the story of a role-playing game is not a new idea, but Awakening evokes powerful emotions by forcing you to treat strategy and intimacy as one and the same.

Getting to Know All About You

The eleventh game in a series that stretches back to the original Nintendo Entertainment System, Awakening tells the story of Ylisse, a kingdom besieged by neighboring countries as well as an ancient evil dragon named Grima. At the beginning of the game, you create your own character who after meeting up with the royal family of Ylisse becomes their tactician. In your charge are the country’s finest soldiers, a group of lovable freaks and geeks as diverse as the weird specialists from old G.I. Joe cartoons, but twice as charming. There are plenty of anime stereotypes at your disposal like stoic swordsman Lon’qu, academic witch Miriel, and androgynous monk Libra, but all of Emblem’s characters reveal themselves to be more than an archetype as you get to know them.

Before you can chat with the knights, archers, and mages in your war party, you have to get to know them in combat. Awakening is a strategy role-playing game in the vein of Final Fantasy Tactics and XCOM: Enemy Unknown. There are dialogue scenes that bookend fights and you can organize your party’s equipment, shop, or talk to characters while on the world map, but the vast majority of the game is spent in chess-style battles. A limited number of party members are thrown out into forest, desert, and castle maps broken into a grid, and you take turns with the enemy moving into position and facing off. Each character has just a single attack move depending on the weapon they’re holding—the character you make for example can use magic books as well as swords—but they can also use items or heal in the case of clerics.

Relying on individual characters’ strengths will only lead to defeat. The secret to success in Awakening is pairing characters together. Archer/dandy Virion isn’t very mobile on his own and weak to boot. Pair him up with cavarlywoman Sully and you’ve got a fighting pair that’s got brawn, the ability to travel great distances, and can attack from range when need be. The joy of strategy games is learning how to use the best tools at the right moment, but Awakening’s distinguishing spice is finding out who in your party works best together.

Love on the Battlefield

Awakening’s warriors don’t just level up and gain new skills as they fight, though. The relationship between paired fighters improves as you go. When Virion and Sully smack around a bandit together, a little heart will pop up over their heads on the field. Keep them together long enough and you can watch a scene between the two of them after the fight. Not only do they get more efficient in the field, they get to know one another better. All of these little vignettes make for a richer reward then just a character that can stab people better with a spear. In the case of those two, it’s actually heartwarming when Sully asks Virion to marry her when maxing out their relationship.

Fire Emblem’s sentimentality can be ferocious. Played on its default settings, the game has to be played patiently and defensively. If the character you made or Ylissian prince Chrom get taken out, that’s an automatic game over, but everyone needs to be protected in equal measure. If someone dies in a fight, they’re not just out for the battle, healing on the sidelines. They’re dead for good. Consequences for failure like this can make a strategy game blissfully intense. XCOM was lionized last fall for its Ironman mode where the game saves automatically and your leveled-up units can die for good. The squad in Fire Emblem aren’t units. They’re people, friends and lovers, and the threat of losing them in every fight adds an incredible layer of tenderness to the tension.

Awakening’s stakes can be lowered. Switching the game to Casual instead of Classic will let downed fighters come back when the fight’s over. It’s easy to meet everyone in the game on Casual, and you can pair up everyone. But like a breezy weekend hookup, Fire Emblem gets boring fast on Casual. The strategy is sound and entertaining on its own in this game, but something needs to be at stake for it to matter.

Intelligent Systems’ game is far from perfect. For one it’s not very good at teaching its subtleties, and hours of progress can be lost because no one ever said weapons could break or that healers can’t cast spells on themselves. Despite the fact that you can tweak almost every setting in the game from what stats are shown on screen to the opacity of the grid on the map, the difficulty settings can’t be changed on the fly. The most significant problem with the game is inconsistent presentation. In story scenes and fights, Fire Emblem’s characters are weirdly proportioned 3D characters. On the map, they’re teeny pixel figures. In dialogue, they show up as beautifully drawn cartoon figures. Then there’re major story moments with animated vignettes, where everyone’s a cel-shaded, human proportioned figure. None of it’s ugly per se, but it’s hard not to wish for a consistent presentation.

But just because they wear a variety of faces, that doesn’t make them any less well wrought and it doesn’t make fighting with them any less fraught. Fire Emblem: Awakening is a special game. Keeping your friends alive is a far more potent motivation than just saving the world from an ancient evil.

Topics
This console generation isn’t about games or hardware. It’s about services
The best Nintendo Switch games for 2023
Fire Emblem Engage makes the wait for a Nintendo Switch 2 more tolerable
Fire Emblem Engage takes the right cues from Nintendo’s mobile games
How to cheat in Words With Friends
Shoulders of Giants brings mascot-era nostalgia to the roguelite genre
The best PSVR games for 2023
Like a Dragon: Ishin’s Trooper Cards are full of cameos, including Rahul Kohli
How to romance characters in Fire Emblem Engage
How to eliminate enemies with no ranged weapons in Fortnite
Fire Emblem Engage gift guide: every character’s favorite gifts
Call of Duty: Warzone 2.0 Season 2 will finally fix its looting system
The best capture cards for 2023: Xbox, PlayStation, and PC