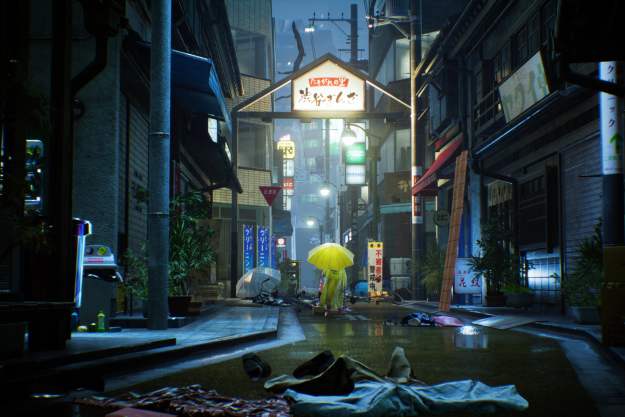 “Ghostwire: Tokyo dazzles with its supernatural set pieces and folklore-driven storytelling, though its open-world tropes lack the same creative edge.”

At times, Ghostwire: Tokyo is unlike anything I’ve ever played. My jaw drops as I run through a hallway that wildly morphs around me as if it’s a space truly possessed by evil spirits. Other times, I’m wading through another map filled with busy work, anxiously waiting for that next scripted “wow” sequence.

Developed by Tango Gameworks, the studio that brought us The Evil Within, Ghostwire: Tokyo is a first-person action game that’s most notable for (likely) being the final Bethesda game on PlayStation. It fuses horror and fantasy to imagine an eerie version of the Shibuya section of Tokyo that’s haunted by spirits — both the helpful and hurtful kind. Tango borrows familiar tropes from your typical open-world shooter, but masks the more generic design touchstones in a layer of atmospheric weirdness.

Ghostwire: Tokyo is at its best when it’s reimagining Japanese folklore in visually astonishing ways and delivering moving visualizations of what it’s like to pass on. It’s less compelling as a checkbox-driven open-world game, with limited content stretched too thin across its apocalyptic version of Shibuya.

Ghostwire: Tokyo is essentially a supernatural buddy cop story. When nearly everyone in Tokyo suddenly vanishes, a boy named Akito gets possessed by a detective named KK who infuses him with special powers. Stuck in the same body, the two must find the masked vigilante who caused the disappearance and stop him from performing a ritual involving Akito’s sister.

Calling it an “open-world first-person shooter” could technically be accurate, but it would be a surface-level descriptor. The clever thing about the game is that it’s deeply rooted in Japanese folklore, which makes tired ideas feel new at times. That isn’t just reflected in the story, but the mechanics too.

Combat, for instance, is built around magic instead of guns. Akito can shoot different elemental powers out of his hands through “spiritual weaving.” He uses quick wind blasts or shotgun-like water shots to expose a spirit’s core and yank it out with golden threads. The system draws inspiration from Japan’s take on wizards, Onmyōji, making players feel like a powerful sorcerer. Battles can feel limited, with only three magic types, a bow, and a few talismans that can be thrown to stun or block enemies. Still, it’s a novel concept that feels more exciting and tactile than firing another gun (especially when using the PS5’s DualSense controller and its adaptive triggers).

The folklore influence plays a more impactful role in its story and worldbuilding, with typical open-world tropes becoming more meaningfully implemented. Unfogging the map involves cleansing Torii Gates. Getting more magic ammo requires praying at a Jizo statue. Standard collectibles become gifts that can be sold to Nekomata, magical cats that run stalls throughout the city. There’s a spiritual justification to every act that made me want to stop playing and read about the mythology it’s based on.

It effortlessly bounces between drama and comedy, playfully engaging with the multifaceted nature of folktales.

While the main story can be a little convoluted, the sidequests make up the heart of the experience. Akito meets several wandering spirits through his quest that are unable to pass on. The game uses those moments to tell compact tales that can be dark, funny, and genuinely moving. One story involves a child piano prodigy unable to play the perfect version of Moonlight Sonata. Another revolves around a spirit stuck in a toilet stall who really needs some toilet paper. It effortlessly bounces between drama and comedy, playfully engaging with the multifaceted nature of folktales.

Duality is central to the world of Ghostwire: Tokyo. It’s a game that balances old and new, serious and funny, spiritual and physical. Part of that comes from the setting itself. Tokyo is a modern city, but one that contains relics of the past right next to skyscrapers. That’s reflected in the game’s design, as players bounce between neon-drenched city streets and quiet shrines tucked away in alleyways.

Tango Gameworks has a lot of fun imagining what the aftermath of a mass disappearance would look like in that space. The streets are littered with outfits from vanished residents. Music is constantly playing out of abandoned buildings, with no one around to shut off the radio. If nothing else, Ghostwire: Tokyo stands out as an eerie atmosphere piece.

Considering the fact that Tango Gameworks was founded by Resident Evil creator Shiji Mikami, it’s no surprise that the game has some successful horror elements. Headless schoolchildren or faceless monsters who creep around with umbrellas are grade-A nightmare fuel. It rarely delves into outright jump scares, instead relying on a more visually haunting psychological horror.

That style especially shines in the game’s standout main missions. Akito often finds himself chasing a spirit through a series of possessed rooms that shift in remarkable ways. In one sequence, I run through a hallway as magazine cutouts skitter across the walls. Not too long after, I find myself walking over a bridge of umbrellas that float up in front of me as I move. They’re creatively stunning sequences that I haven’t seen done as well as this since the Scarecrow sequences in the Batman Arkham series.

If nothing else, Ghostwire: Tokyo stands out as an eerie atmosphere piece.

All of those creepy elements are nicely balanced with the game’s lighter tone. The game uses yōkai (i.e., spirits) like a cucumber-loving kappa to add some whimsy to its world. It would be easy to make a game about ghosts and spirits that turns off all the lights and tries to creep players out, but Ghostwire: Tokyo wants players to engage with the nuances of Japanese mythology. It can deliver creepy bedtime stories or playfully absurd tales, proving that there’s no reason a game can’t do both.

Ghostwire: Tokyo is a brisk game for what it is, clocking in at around 15 hours. Even at that length, there’s a sense that the developers are stretching to fill the time. The story itself is short, with repetitive open-world busywork making up most of the runtime. Whereas most games of the genre would fill the streets with activities, there’s only a few things to do here — and they get old fast.

Players will spend most of their time collecting spirits in paper dolls (katashiro) and depositing them in phone booths to gain experience points. I found myself spending hours at a time collecting souls and then making detours to find a payphone so I could unload them all and then store more. The loop gets tedious, feeling more like a compulsive distraction from the visually compelling story sequences.

I can feel a truly great eight-hour action game under the surface.

There aren’t many enemy types in the game either, which becomes apparent in the back half especially. Every mission or world activity tends to devolve into a wave defense game where players need to fend off the same monsters in different configurations. Boss fights are also disappointing across the board, as none of them really play with the magic system in any real way. Considering that the combat options are sparse, the game ends up feeling front-loaded with its more creative ideas.

I can feel a truly great eight-hour action game under the surface. There’s just a lot of padding that gets in the way of a potentially tight adventure. The game’s fourth chapter is especially momentum-killing, tasking players with cleansing a dozen gates back-to-back and leaving a potentially fun gameplay twist to a cutscene. Players could mainline the story much quicker and just get to the good stuff, but that would mean missing out on health upgrades, key skills that speed up battles, and more.

Ghostwire: Tokyo can feel at odds with itself at times — the one place where its duality feels unintentional. It’s a wildly creative game that takes visual and tonal leaps of the kind I’ve never really seen in a video game. But all of those fresh ideas are stuffed into a generic exploration game format where players squint at a map cluttered with icons. Even with that design conflict, though, I was at full attention anytime I spoke to a spirit about their problems. Games like this often want players to build their own narrative through play, but Ghostwire: Tokyo is a much better storyteller than I am an explorer.

Ghostwire: Tokyo is a promising start for a creative new IP with lots to admire. It plays with Japanese folklore in a variety of ways, creating a strange, creepy, and often funny world. It’s only let down by middling exploration tropes that stretch its simple combat system and small enemy list too thin. Though its spirit-collecting loop can get tedious, the game shines anytime it drops its more compulsive hooks and tells some moving folktales about death, grief, and yōkai.

It’s a bit of a unique game, so I’m not sure you’ll find a lot of first-person spellcasting games set in a spirit-filled city. That said, the Yakuza games feature comparably sized worlds and a similar balance of drama and comedy.

It took me just over 15 hours to beat the game, completing all but one or two sidequests. Committed players can try to collect every single spirit and item, which will take much longer.

Yes. If you’re on the fence, wait until it inevitably hits Xbox Game Pass in a year, but it’s worth checking out the visually fun ways it plays with folklore.

Ghostwire: Tokyo was tested on a PlayStation 5 hooked up to a TCL 6-Series R635.