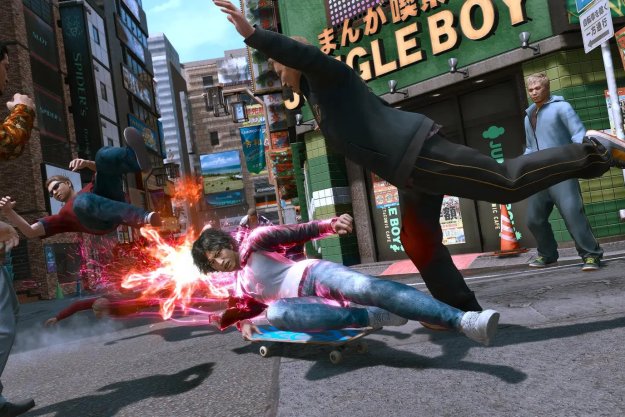 “Lost Judgment is a mechanically sound Yakuza spin-off, but its convoluted story makes it feel like a TV show that's gone on a few seasons too long.”

If Yakuza is a goofy soap opera, Lost Judgment is a hard-boiled procedural drama. Both genres share similarities, especially when it comes to their use of melodrama, but the difference is in how seriously they take themselves. Soap operas tend to be cheeky, really reveling in their overblown emotions and taking it to the brink of comedy. Procedurals like Law and Order aren’t quite as tongue in cheek. It’s not easy to make a grizzly murder funny.

It’s an important distinction for Yakuza fans to keep in mind. While Lost Judgement is a mechanically familiar spin-off of the long-running action-RPG series, it offers a completely different tone. We’re no longer seeing Kamurocho through the eyes of a delightful himbo or a bright-eyed underdog, but a hardened detective investigating a sickening series of crimes. Kamurocho may look the same, but its streets feel a little darker this time.

Lost Judgment tightens Yakuza’s traditional beat-em-up combat and adds much more gameplay variety thanks to its detective premise. Its story is far messier though, tackling a bevy of sensitive topics that aren’t always handled with grace.

While Lost Judgment is classified as a spin-off, it’s actually a replacement for the traditional Yakuza experience. Like its predecessor, 2018’s Judgment, the story stars Takayuki Yagami, an independent detective working in the same crime-filled streets we’ve seen in just about every Yakuza game. As in those titles, Yagami finds himself bouncing between a couple of small, open cities densely populated with missions, side-quests, and minigames. I’m always surprised by how much I don’t mind returning to Kamurocho thanks to how wisely space is used. No street feels useless; there’s enough attractions around to keep it feeling like a living space.

For those who found Yakuza: Like a Dragon’s jump to turn-based combat disappointing, Lost Judgment is a return to the good old days. That is, the good old days of beating the snot out of people in real time. The brawling combat here is an upgrade here, as fights feel faster and more fluid than games like Yakuza Kiwami. Yagami is a quicker fighter than Kiryu, using three different styles to take enemies down. With a whole bunch of move upgrades to choose from and plenty of hard-hitting contextual special attacks, fights feel more complex than ever. Kiryu was a lumbering powerhouse, but Yagami is a force of nature, spin-kicking off of walls and popping up from the ground to hit surprise hurricanranas.

It isn’t just the combat that feels different through Yagami’s perspective. Since he’s a detective, there’s more happening in the gameplay. He can parkour up walls to sneak into buildings, use gadgets to investigate crime scenes, and sneakily tail suspects. There’s much more variety to the beat-to-beat gameplay in Lost Judgment, keeping it from feeling like a beat-em-up button masher. When fights do happen, they have a little more weight to them. After all, Yagami would rather keep a low profile, so you know something’s gone wrong when he needs to get his hands dirty.

Even with that simplicity, Lost Judgment feels like a better use of the Yakuza framework in many ways.

Many of the side systems are simplified, which makes them unobtrusive, though not always exciting to play. Investigation sections are little more than a point and click minigame to find clues. When players are asked to look through collected evidence to solve a loose end, it’s just a matter of clicking through a list of documents until they get the right one. There’s no consequence to saying something ridiculous in court or showing someone a completely unrelated piece of evidence.

Even with that simplicity, Lost Judgment feels like a better use of the Yakuza framework in many ways. Wandering the city streets and investigating every little alley narratively makes a lot of sense here. Something as basic as side-quests feels more motivated since they’re framed as Yagami picking up cases, rather than haplessly wandering into a goofy conflict on the street. Everything feels more deliberate, which makes the game feel like a smart replacement for the main Yakuza games (which will mirror Like a Dragon going forward).

While the game is mechanically sound, it wades into tricky narrative territory. And since a great deal of the game is spent watching dialogue-heavy cutscenes, that ends up sticking out. The story begins when a decomposing corpse is discovered in a warehouse, bloodied and covered in insects. It isn’t just a simple murder case though. Several plotlines weave around one another, including a bullying crisis at a local school and a train groping.

The latter is sure to stir up a fair amount of backlash. The crime itself is uncomfortable, but the role it plays in the main story gets baffling and grotesque. I won’t go into more detail there, but it’s a moment that makes me wonder if Lost Judgment bites off more than it can chew thematically. It deals with sensitive topics like bullying and sexual harassment but isn’t always graceful in how it presents them.

Lost Judgment’s story ultimately feels like a good show that goes on for a few seasons too long.

The story is ultimately about the tangled webs that form when our justice systems fail. The disparate players all become victims to the system to varying degrees. Everyone is struggling to find solutions to problems that courts just can’t seem to solve. It’s less black and white than Yakuza’s sometimes cartoonish depiction of organized crime where goons are goons, and at times poignant for it.

The issue here is that Lost Judgment is a little too invested in having a twisty serialized TV plot to handle those ambitious themes. Key revelations end up feeling like the kind of cheap cliffhangers designed to keep audiences on their toes. Victimhood becomes a slippery topic as character power dynamics constantly shift, turning significant, real-world commentary into pulp fiction.

Lost Judgment’s story ultimately feels like a good show that goes on for a few seasons too long. The plot spins its wheels as if a studio has ordered two unexpected seasons right before the final one. Characters heel-turn more than a WWE wrestler, making Yagami look like an amateur for trusting anyone. The soap opera shocks of Yakuza are still there, but they’re out of place in a much more serious story.

Night on the town

Like Yakuza games, the main storyline is only one aspect of Lost Judgment. Its cities are full of smaller stories and activities. Yagami can play a game of Shogi on the street, race drones, or play fully-emulated, classic Sega games in his office. Those little extra details have always given Yakuza its distinct charm and they’re not lost here. It’s just delightful to be able to take a break from a tense story and unwind at the batting cages with well-designed minigames.

While some of the activities are familiar, others bring some fun new energy to the cities. There’s a pair of surprisingly enjoyable “VR” games, including a neon-drenched take on Mario Party. There’s a goofy rhythm-based dancing minigame that replaces karaoke. Most noticeable is that Yagami has a skateboard at all times, which he can use to cruise around town. It isn’t terribly complex, but it’s both stylish and practical as a locomotive tool.

On top of that, there are some impressive side missions this time around. The game essentially contains an entire side campaign where Yagami helps a school’s mystery club solve a string of cases. Considering how heavy and messy the main story is, it’s a more wholesome set of stories that steal the show. It made me wish that the entire game was more of an 80s school comedy with a self-serious Yagami becoming an unwitting mentor to kids.

… Judgment could stand to loosen up a little in future installments.

It’s one of the few places where Lost Judgment is legitimately funny, and that’s the biggest disappointment here. Yakuza tells serious crime stories, but that’s always balanced by uproariously funny side quests that delve into absurdity. No side-quest here is as funny as helping a man safely cross a bridge while he wears a jacket that makes everyone want to beat him up. Nothing made me laugh as hard as Kiryu accidentally getting roped into buying dirty magazines for a kid. By comparison, everything here is a little more grounded. You wouldn’t call Yagami a goofball.

To me, it’s that levity that’s really at the heart of Yakuza. Comedy gives its story and characters more depth. Kiryu would be a dull protagonist if it weren’t for the sitcom side-quests that highlight his goofier side. The rift in the Yakuza franchise created by Like a Dragon isn’t just about real-time vs. turn-based combat. If Like a Dragon and Lost Judgment are any indication, the mainline Yakuza games will retain their sense of humor while the Judgment titles will lean more into weighty drama (that is, if the series continues to exist at all). Players can decide which they like more, but Judgment could stand to loosen up a little in future installments.

Lost Judgment is a suitable replacement for the traditional Yakuza style, even if it doesn’t have the same heart or humor. Combat feels better than ever and there’s just more to do thanks to various detective mechanics that keep anything from getting too stale. That strong gameplay is ultimately let down by a convoluted and at times insensitive story that can’t quite deliver on its thematic ambitions. The bones are still there though, making this another good excuse to see what’s up in Kamurocho.

I’d recommend starting with the mainline Yakuza series before jumping into this. Yakuza 0 or the Kiwami games don’t play as well but feel more tightly structured.

The game takes an upwards of 30 hours to complete and that number rises quite a bit thanks to the optional school missions, 42 side-quests, and various minigames.

No. If you’re not bought in on the franchise already, this likely isn’t going to change your mind. This game is more for hardcore Yakuza fans who miss its traditional brawling style, though it’s not quite as satisfying on the whole.