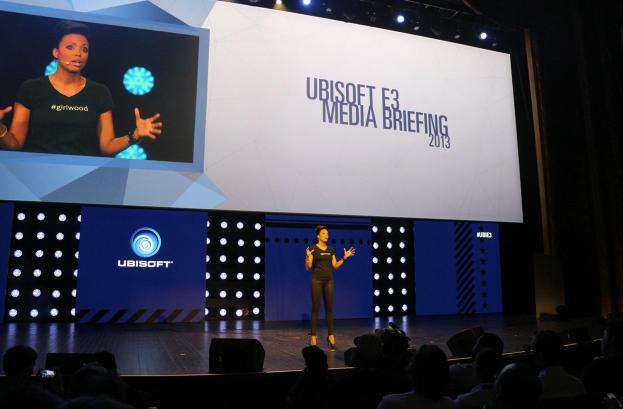 As the E3 Cavalcade of Press Conferences rolled along, Jerry Cantrell from Alice in Chains kicked things off at the Ubisoft Media Briefing with some pulse-pounding guitar licks. After which he queued up the Session Mode in Rocksmith 2014 via voice commands, changed up the house band, and brought in a synthesizer. Apparently this game will make you an instant rock god. It’s “The Fastest Way to Learn a Guitar,” after all. But all things considered, it was a pretty hypertastic way to start up a press conference.

Aisha Tyler joined Jerry on stage, sporting a #girlwood t-shirt, and kept the ball rolling. Apparently she “Did a lot of dirty deeds” to Alice in Chains back in the day. Yowza. She promised us a “Straight Bonkers” list of games to be teased and announced.

Tom Clancy’s Splinter Cell: Blacklist: This game will be coming out in late August, and there weren’t many surprises here. We know that Spies vs. Mercs multiplayer mode will be making a return; Tyler called it “The biggest Splinter Cell ever,” and the gameplay trailer and iconic whine of Sam’s night vision goggles powering up will definitely will get have your trigger finger and stealth pants itching.

Rayman Legends: One of Ubisoft’s most recognizable and colorful platformers, Rayman continues the whimsy with Rayman Legends. While the trailer was all cutscenes and trailer moments, they followed that up with some actual gameplay. This followup to Rayman Origins looks like a lot of fun, and promises to be “the biggest Rayman ever.” Maybe Ubisoft just decided to supersize everything this year. Rayman Legends will be out September 3.

The Mighty Quest for Epic Loot: This game is all about building a castle and filling it full of traps so you can protect your treasure room. It’s a twist on the classic tower defense model. You can try to invade your friend’s castle, and if you are successful, you can leave a taunting message for them. You can sign up for the beta right now at www.themightyquest.com, and challenge the game’s developer LPPYeahYouKnowMe.

South Park: The Stick of Truth: This game has been dangled in front of us like a carrot for awhile now, and we played it at last year’s E3! But now it’s finally coming out. And not with a whimper. In fact, the opening line of the video for the game was, “I’m going to teach you a fart called the Nagasaki.” It’s exactly what you would expect from South Park, and it will be out later this year.

The Crew: Ubisoft CEO Yves Guillemot took the stage to introduce a next-gen game from Reflections and Ivory Tower called The Crew. It’s a hyper-ballistic game along the lines of the Fast and Furious franchise, and unfortunately, everything we saw was a cutscene. Near the end of the sequence, the assembled team of cars combines to take down an armored truck, so we imagine this means some high-octane heists will be involved. It’s an open world game where you will be taking over a criminal organization one city at a time.

The game is extremely open, and features dynamic backgrounds that you can actually drive to and experience. In one road race, we were in some hills above Las Vegas, and you could drive down to Vegas if you wanted and drag race on the strip. You can also call in friends to join your crew on the fly without having to drop into a lobby, and take part in multiplayer events. The customization is dynamic, allowing you to strip a car down to the chassis and build it up in an exploded view, and you can take that experience onto the iPad and customize from there as well. The game is coming early in 2014 for Next-gen systems and PC.

Watch Dogs: Ubisoft is already touting this game as “The game that has come to define next-gen,” and it is definitely the most visible, upcoming title for next-gen systems. Ubisoft wowed the crowd with this game last year, and it still manages to look impressive. We were treated to some cutscenes that looked downright photo-realistic at times, following an individual through an upscale club where Japanese men ate sushi off of the body of a nude woman, and down into the guts of the basement where our protagonist disrupted all of the electronics before dispensing his vigilante justice.

Just Dance 2014: The game seems to indicate that Ubisoft is moving toward a year-based naming convention, rather than Just Dance 5. According to the video, Ubisoft seems to think that this game will go “straight bonkers” with the teen crowd and become the go-to party game of the year. It will be out this holiday season.

Rabbids Invasion: This is a television show launching soon that adds an interactive function to entertainment. While the show plays, you can play mini-games over the actual show, clicking on objects, screaming along with the Rabbids, and so on. Just in case you need more reasons to get kids pumped up about watching cartoons, this is what you’ve been missing.

Assassin’s Creed: Returning to core gaming, Assassin’s Creed 4 Black Flag, launched a brand-new trailer that focuses on an altercation between Edward Kenway and a group of soldiers who picked the wrong bar. Then came a hail of cannonballs and some naval battle cutscenes showing the ship to ship battles, broadsides and boarding parties that will be featured in the game. Again, everything was a cutscene, backed by some emo music, and we’re eager to see more gameplay for this one. Especially those underwater diving moments, which look like they come from a completely separate game. We’ll see more on the floor, and the game will be out on October 29.

Trials Fusion: Taking ridiculous motorcycle stunts into the future, this game brings sci-fi aesthetics to next-gen systems, and Trials Frontier will be coming out exclusively for mobile devices. The two versions work together, and will allow you to access previous runs, leader boards, and more.

In what is becoming an increasingly popular “one last thing” moment at E3 press conferences, Yves Guillemot  took to the stage to introduce a brand-new shooter game about bioterror called The Division. In the future, an event called Dark Winter has decimated some of humanity, and we have complex systems that we don’t even understand anymore. Combining the fact that Americans are huge shoppers, spending up to 90 billion dollars in one day with the note that the flu virus can survive for up to 17 days on a bank note … it looks like greed and avarice will be our downfall. Directive 51 is the government’s secret plan to deal with an outbreak like this if it ever happens.

In the game, of course, this actually does happen. Set in a world three weeks after NYC was decimated on Black Friday, you patrol through eerily empty city streets with weaponry and a wrist-mounted computer. It’s a shooter, combined with a lot of future tech, and it looks beautiful. There’s a squad element here, with drop-in and drop-out gameplay, and the team of players we were following eventually met up with another squad and went seamlessly into PvP. The game asks “What will it take to save what remains?” With the Watch Dogs introduction last year, and The Division reveal this year, Ubisoft has us pretty excited about some games are both still yet to come on systems that aren’t even out yet.

And that’s a wrap! The Division was a definite surprise, sand while we would have liked to see more gameplay footage from everything on this list, we know we’ll be catching at least some of that from the show floor during E3. Now, onwards to Sony!