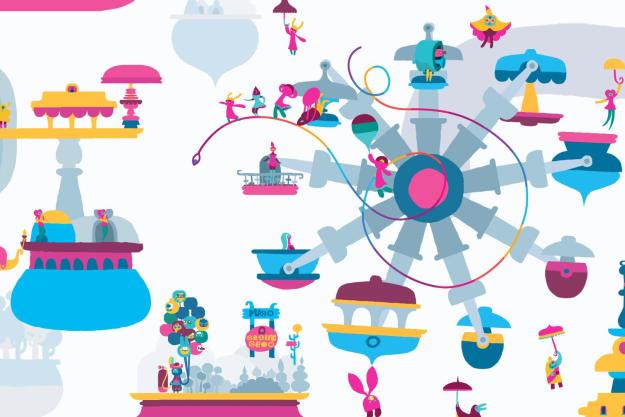 “Hohokum is inventive, beautiful and relaxing, especially for players who won't freak out when they're unsure of exactly what to do next.”

Players will know within the first five minutes whether Honeyslug and Sony Santa Monica’s Hohokum is for them. You begin life as a snake, or a sperm, or however you want to look at it, flying around, or swimming, or what have you. You’re in the womb, or the ocean, or space, or a microscopic cell. You glide effortlessly, now slow, now fast, sliding along the walls, wiggling gleefully as you pick up speed. Joined by a rainbow of brothers and sisters, you revel in discovering how each bulb and ball and bump reacts to your collisions. You reach a nexus, where all these creatures are in sync, making beautiful shapes like a kaleidoscope that you control.

There’s no clear goal in Hohokum’s initial section of play, referred to after the fact as “Home.” It’s a hub world you can return to instantly and at any time from the pause menu. From here, the other snakes — we’ll go with calling them “snakes” — scatter, and you spend the rest of the game trying to win them back. But just like in those first five minutes, Hohokum emphasizes the tactile joy of playing in its whimsical worlds over set goals or clear storytelling. You rescue the snakes because that’s the natural result of your messing around.

Players will know within the first five minutes whether Honeyslug and Sony Santa Monica’s Hohokum is for them.

Each main level has a story, whether or not you realize right away what is happening there and what you need to do. A vast, blue forest teems with strange creatures, but you might explore this repetitive environment for 10 minutes before you find the small tribe of tree-dwelling natives (and their music-loving tree god) at its center. An impossible, floating water park hides a portal to the distant future, but you can fly around there endlessly, ferrying happy swimmers between springboards and water slides, without ever knowing why or what to do.

Other times, your path is obvious. In an ink-dark cave, a lantern-carrying adventurer rides on your back as you knock down begemmed barriers and avoid light-eating bats. Your prize—one of the serpents that scattered at the beginning of the game—emerges when you reach the treasure chamber at the end of this cave, as your helper hops off to assess his own prizes.

Each snake you find greets you with a recap of its exploits in the wide world of Hohokum. One has been studying the forest-dwelling tribe, embedded in their midst. Another is attached to a string, flying high at the kite festival. In the water park, where a breach in the rock lets you travel through time, there’s a serpent hiding in an alternate future reached by manipulating the events of the past. Another, living on a scrolling, vertical, monochrome farm, experiences the entire circular life-death cycle over and over, from bird food to hunter’s prey to fertilizer to sprouting plant, and back again.

Once discovered, these serpents head back Home, and you hop through a portal to a new area—a party where no one has a drink despite the sea of wine they’re floating on, or a theme park where the roller coaster cars have gone missing, or a honey factory where the bees are asleep on the job, or trapped in the machinery.

Hohokum is LocoRoco, but happier, and weightless. Or it’s Patapon, without the rigidity of strictly rhythmic gameplay, or the stress of knowing you might at some point fail. It shares even more with Sound Shapes, particularly when it comes to audio and visuals, but without the shackles of sticky platforming. Hohokum even shares DNA with Fez. You’ll feel it when you solve one puzzle only to be presented with another, or when you return to an earlier level with new knowledge that leads you to a different path.

The players that stand to enjoy Hohokum the most are those that don’t mind flying around aimlessly, seeing how the world reacts to their presence, simply because it’s fun to do, and it feels, looks, and sounds amazing. This, not the puzzles themselves, is Hohokum‘s greatest challenge: you may get stuck for an hour or more, but the steps to each solution eventually solidify, sometimes through sudden inspiration, and other times with sheer force of will, by way of trial and error. Either way, you need to be willing—you need to want—to keep experiencing these worlds, or whimsy might give way to tedium and frustration.

The players that stand to enjoy Hohokum the most are those that don’t mind flying around aimlessly, seeing how the world reacts to their presence.

Some players will find that this works thanks to the purity and clear-headedness of Hohokum‘s gameplay and world. Through kite-flying festivals, amusement parks, dinner parties, and jungle safaris, everything in Hohokum fits. There is a synergy among all its elements: the shockingly colorful art and incredibly imaginative creatures and levels, the electronic music that’s pitch-perfect for every situation, the ways your actions add to the score, and just the pure, mechanical enjoyment of flying figure-eights and loops in, out, and around the minutiae of every painstakingly detailed level. Very rare frame rate drops, even on PlayStation 4, detract only slightly from these experiences.

Hidden in those details are nearly 150 collectibles in the form of closed eyes that open and look around when you pass over them. You can see how many you’ve yet to find in each level simply by pausing the game, where a bearded lunatic runs across the menu yelling numbers, or a sign-toting tentacle uncoils from off-screen. This pause menu, by the way, has no “resume” option; the first choice sends you back to the hub world, meaning if you pause and simply press “X” you’ll be sent back and lose your progress in that level. You need to hit the controller or PS Vita’s pause button again to resume the game, but chances are you’ll forget and press “X” once or twice at least. It’s a bit irksome.

It’s clear all along that finding these eyes is a secondary concern, which is good, because some of them are so well-hidden that they’re literally invisible. The reward for doing so is appropriately frivolous. You don’t even get a Trophy (although it’s worth noting that Hohokum‘s Trophy goals are as imaginative and fun as the rest of the game).

Hohokum fosters endless interpretations. Some players will find that it’s about family, loss, redemption, nostalgia, and innocence. The game’s opening, in which a whole nest of multicolored snakes flies in perfect synchronicity with you, is simple and beautiful. As you explore Hohokum’s complicated worlds and these prodigal serpents return to their point of origin, you slowly regain that beauty, until the gang is finally back together again, flying once more in tandem. Everything is done with this one thing in mind: to regain something good that was lost. If you can enjoy Hohokum long enough to understand what it’s asking of you, you might feel that too.

This game was reviewed on a PlayStation 4 using a copy provided by the publisher.