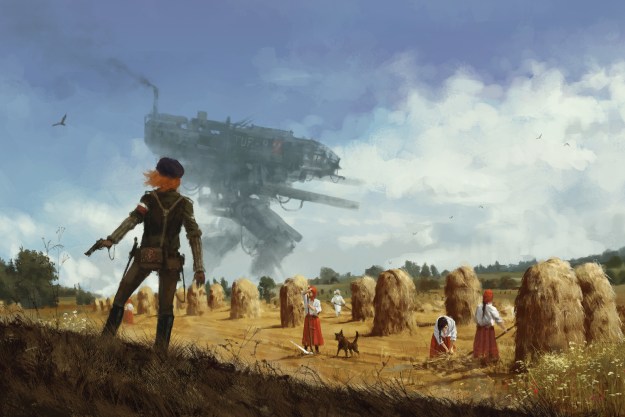 “An enjoyable real-time strategy game held back by a lack of polish and content.”

Iron Harvest is a real-time strategy game that takes place in an alternate history of early 20th century Europe, where the wildest creations of steampunk were a reality. While the game draws you in with its giant, lumbering mechs, it is the surprisingly personal story at the heart of the campaign that will keep you playing, along with an excellent visual design.

With a variety of ways to tackle the various conflicts, Iron Harvest is an enjoyable RTS. Still, its steep learning curve might be off-putting to new players of strategy games, and its rather limited selection of content could turn away RTS veterans.

A heartfelt, if predictable, campaign

Real-time strategy games are all about controlling multiple units at a time in large-scale conflicts, so the campaigns included in these games typically work on a macro level, and are concerned with telling the big picture of the combative forces. Iron Harvest features these conflicts, but at the heart of its story is Anna Kos, a young citizen of the fictional eastern European nation of Polania. At a very young age, her brother leaves her village to fight in the Great War. What was meant to be a short engagement ends up spanning years, and the wreckage of mechanical war machines eventually litters the land, creating the titular iron harvest. Anna and her pet bear, Wojtek, get caught up in the aftermath of the crisis, which, like real-world history, stokes the flames for a second, even more devastating conflict.

While the game draws you in with its giant, lumbering mechs, it is the surprisingly personal story at the heart of the campaign that will keep you playing, along with an excellent visual design.

It’s an emotional tale of loss, duty, and sacrifice that meshes surprisingly well with some of the more zany elements of the game, such as the comically villainous Lev Zubov, leader of the opposing Rusviet forces. While the beats of the story can sometimes be seen coming from a mile away, strong performances from the core cast help sell the narrative. Unfortunately, some of the voice acting from side characters and NPCs is far weaker, compromising the immersion somewhat. This and stiff animations during cutscenes made me wish the developers had a slightly bigger budget to work with to iron out some of the kinks and provide a more polished presentation.

The graphics in the cutscenes leave a lot to be desired, but when the game pulls the camera out for gameplay, the world really comes together with some of the missing details getting lost in the broader, well-realized level design. What makes the world even more fun to inhabit is how destructible it is. It’s incredibly satisfying to target enemies with a mech and watch it charge through a warehouse, a pile of bricks left in its wake.

The aesthetics of the game are inspired by Polish artist Jakub Rozalski and his 1920+ collection of paintings. Playing the game is like watching one of Rozalski’s works come to life, which is a visual delight, as variations of brown are contrasted with the bright orange of exploding rockets or the deep blues of the Polanian riflemen’s uniform.

Gameplay is deep but difficult to master

Iron Harvest emphasizes taking cover and flanking the enemy, something only a few other games in the genre concern themselves with. Adding mechs to the fight that can obliterate that cover in a matter of seconds makes for an incredibly active RTS. There is always something to do, and you will constantly be reacting to the turning tides of battles. Whereas some strategy games have you order commands, wait to see what the outcome is, and then shuffle your forces around, Iron Harvest offers no such reprieve, making it a refreshing entry in the genre.

Witnessing the real-time physics in action is incredibly satisfying.

I often wished, however, that my forces would respond with the haste necessary to complete their tasks. I found myself, at times, clicking on a unit to offer a command, and then watched them take a few moments to execute it. By the time they were ready, I needed something different from them. The enemy A.I. was also frustrating at times. I would have squads firing from behind cover at enemies that would just stand out in the open, returning shots to no avail. At some points, they’d even take cover behind the same stone wall where my troops were, and I’d just have to wait to see which squad could outlast the other. Moments like these really soured my experience of the generally decent gameplay.

The campaign slowly introduces the game’s mechanics, and I heavily recommend you complete it before jumping into the stand-alone A.I. battles — and certainly before trying to face another real-world strategist in the multiplayer. Still, even after getting well-acquainted with the gameplay, the crazy juggle of controlling the field, managing resources, outmaneuvering opponents, and building my army was frequently overwhelming. Publisher Deep Silver provides a nearly 100-page guide that goes into the details of all the different mechanics of the game, and understanding all of them is necessary to tackle some of the more difficult encounters.

Contrasting with the wealth of mechanics is a paltry content selection. After completing the story, I moved over to the A.I. conflicts and multiplayer offerings, and audibly exclaimed, “Is this it?!” The game has only a handful of maps and mission types to choose from, paling in comparison to many other RTS titles. There is future content planned for the game, but there will be a fee for it.

After completing the story, I moved over to the A.I. conflicts and multiplayer offerings, and audibly exclaimed, “Is this it?!”

Those looking to explore the various game modes and forgo the story will have a hard time getting their head around Iron Harvest’s many gameplay facets. It’s easy to get frustrated with the difficulty, especially if a player is new to RTS titles. The difficulty can be reduced in the A.I. skirmishes and challenges on offer, but I found the medium setting too easy and the hard setting far too challenging. I was crushed in the latter as much as I was dominating in the former, and I wish the game provided a middle ground between the two.

Iron Harvest is a solid real-time strategy game, with the developer’s passion for the genre seeping into the story and design. However, there are some unfortunate missteps when it comes to the difficulty that will turn off more casual RTS fans, and a lack of content that might turn off more seasoned players.

The game is heavily inspired by Company of Heroes, which is a more polished game in comparison but is missing some of the more exciting concepts like the steampunk mechs. Age of Empires II: Definitive Edition is very popular among RTS players at the moment, and offers one of the most bountiful packages in the genre when it comes to content.

The campaign is around 15 hours long, but as previously mentioned, there’s not a ton of variety with the additional missions. Only players wishing to test their skills with some of the higher difficulties will find themselves playing for tens of hours.

Eventually. Wait until the game bundles in more content and has tweaked elements like the difficulty curve and unit responsiveness.