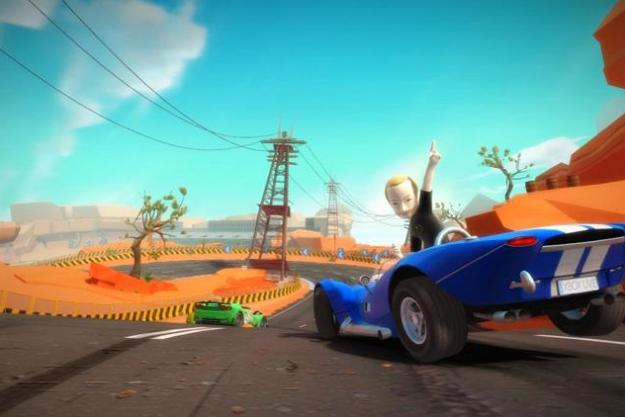 “There are better uses for your Kinect.”

Have you ever wished you could drive a car — but without a controller? Probably not, and with good reason. In Kinect Joy Ride, you are a racer with limited racing controls, and by steering the air, you control your car as it accelerates around the track. You can also pull off some tricks while jumping.

The game offers several game types, including: a “Pro Race,” which is your average lap-based race; “Battle Races”, similar to pro races, but with weapons; “Smash”, a game mode that encourages you to destroy items to increase your score; “Stunt”, which ranks you based on the amount of tricks you pull off; “Dash”, a time-based race; and “Trick,” a Simon-says style where you need to imitate poses on screen.

The problem with Kinect Joy Ride is that steering without a wheel is tough enough without the added element of lag introduced by the Kinect’s hardware. It is a novelty, and one that wears off quickly. If this game had been included with the Kinect, it would have received a bit of a pass, but since it is a full retail game, it is shockingly light on content. A decent game for families, but one that most families might enjoy for an evening, if that.

Best Nintendo Switch deals and bundles for October 2022
The Xbox Series X games with the best graphics
The best Zelda games, ranked from best to worst
The PS5 games with the best graphics
The best gaming tablets for 2022
Fortnite Chapter 3 guide: All week 1 quests and how to complete them
Cyberpunk 2077 resurges with 1 million daily players this week
Dragon Quest Treasures shows off monster-catching gameplay
All Fortnite Chapter 3, Season 4 quests
The best wireless keyboards for 2022
Best gaming laptop deals for September 2022
‘Wordle’ today, September 23: Answer, hints, and help for word of the day (#461)
Madden 23 Face of the Franchise: Tips, tricks, and best positions