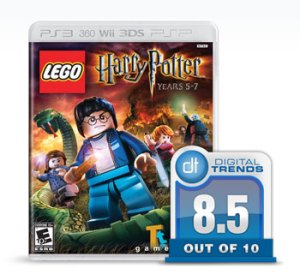 Although Harry Potter may have finished his run in the theaters, and the books are long since done, the property still has life left in it, especially in the world of video games where there is still a lot of room for the series to expand and reinvent itself. Besides the fact that Harry Potter helped make J.K Rowling wealthier than the Queen of England, the property is just too rich in story to go away, and that is where Traveller’s Tales Games comes in.  The makers of the ridiculously fun and wildly popular Lego games, including last year’s Lego Harry Potter Years 1-4, are back with the conclusion to the Potter story in Lego Harry Potter Years 5-7.

If you know the story of Harry Potter, you should be able to form at least a decent idea of what it contains in terms of plot. Where this series diverts is the Lego look and feel, which are charming and fun, and can turn an incredibly exposed series on its head and make it feel fresh again. TT has done it with Star Wars, Indiana Jones, Batman plus others, and the look and gameplay are distinctive.

But having just an interesting twist isn’t enough, it needs to have a life of its own to differentiate itself from the original while still honoring the source. TT has a formula that works well, and while there are a few nagging issues and omissions, they have done it again with Lego Harry Potter Years 5-7.

If you aren’t familiar with the Harry Potter films or books, this game is not the place to jump in. It’s more like the next chapter to Lego Harry Potter Years 1-4 than a true sequel, but it takes the existing story for granted in order to push the boundaries and the expectations of fans.

The game offers the major moments from the final three years of the Harry Potter saga, and there is a lot of content in this game because of it. A lot of content. The game takes you through the moments you know well, from Harry’s trial taken in The Order of the Phoenix, to the final confrontation with Voldemort. It’s all there, plus several original sections which may not technically be 100-percent faithful to the book, but all fit well and honor the source material.

As with the other Lego games, the thing that will set these games apart from the official Harry Potter movie adaptions is the inherent sense of humor. Well, that and the fact that this game is very good, while the other Potter games have veered more towards the “Oh God, what horror have you created and unleashed upon mankind?” end of the spectrum. It may not be the most faithful adaptation of the books or movies, especially when the drama ratchets up towards the end, but it is by far the best.

Even if it doesn’t satiate the purists, it offers a new take on the story that anyone can pick up and enjoy.

The old and the new

Years 5-7 isn’t a huge departure from Years 1-4 in terms of gameplay, but there are a few notable changes — as well as a few glaring omissions.

One important new addition is a quick-fire button that allows your character to cast spells without targeting anything. This isn’t a game-changing function, but it really does add to the title, and on top of that it can sometimes act as a hint on where to go. There are times when the objectives can be convoluted — especially if you aren’t already familiar with the series — and this helps move things along.

As you progress you will also learns spells new to this game, which will be vital later in order to solve certain puzzles, especially when you enter into one-on-one wizarding duels against various foes. In these combat mini-games, you will need to match your opponent’s spell with the same spell to block. As with most things in this game, it isn’t difficult, but it can be very fun as well. Beyond that, the combat is much the same, as you fight off enemies with your arsenal of spells, but combat is almost always secondary to the puzzles, of which there are plenty.

Many of these puzzles will also require a particular character in your party that you can switch between with the touch of a button, which does help to keep things fresh as there are many, many characters. Sadly for those who played Years 1-4, you cannot transfer over your old save data though.

Another staple of the series returns in the co-op, which is drop-in/drop-out. As with the other co-op Lego games, this is a highlight of the series and playing through with a friend is a blast. It also makes this an excellent game for families, as anyone can pick it up and play without being a hardcore gamer.

One massive omission, though, is the lack of online co-op play, which is almost inexcusable. It doesn’t take away from the game, but it still feels like an omission, and a huge missed opportunity to expand the Lego games’ brand. That being said, the local co-op is among the best implemented of any game. The camera is exceptional, the gameplay is complementary to two players, and the solid teammate AI means that while local co-op is fun, it isn’t necessary to enjoy the game.

Once more into the breach

Years 5-7 is a big game with a lot to see and explore, but there is also a creeping sense of deja vu that nags at you after a while. You expect the normal things to be staples, like collecting the studs sprinkled throughout the game, but many of the puzzles are the exact same with only minor visual differences. But that isn’t a major problem, especially compared to boss battles.

The boss fights are underwhelming to say the least, and most involve you learning a pattern. The problem is, the same exact pattern appears throughout the game, and you will end up fighting the same fight against several opponents again and again. It isn’t a huge deal, but if you aren’t a fan of the look and humor, the gameplay will feel a bit repetitive.

There are exceptions to playing the same things again, though, and the inclusion of a free-play mode will make going back and replaying completed sections constantly feel original. Many of the sections in the game will have areas that are locked, and only become accessible with a particular character and their unique traits that you won’t receive until long after you moved on. For those that enjoy collecting, it will make the game continually feel new.

The main plot is a solid 12 hours, but it can — and should — be extended through exploration and replay in the free mode, not to mention the co-op gameplay which can make the story feel completely different on a second playthrough.

Harry Potter Years 5-7 is the best Harry Potter game to date. Even with the Lego look of the world, the graphics are the best of the property to date, which is both a slam on the previous games as well as a compliment to TT. There is a fantastic sense of humor at work, mixed with a sense of innocence that creates the sense of wonder that is essential to Harry Potter’s universe. It departs from the source material a few times in minor ways, but always feels like it is honoring the originals.

With co-op play, free play, and plenty of area to explore, Years 5-7 is a game that is brimming with value and potential replay. The missing online co-op is notable, and there is some serious repetition at work, but neither really hurt the game. In this current sea of mega-hits that have, and will continue to dominate the gaming landscape through the holiday season, this title might be a bit lost in the mix. But for fans of Harry Potter, and for fans of the Lego games, it is definitely worth the look.

The PS5 games with the best graphics