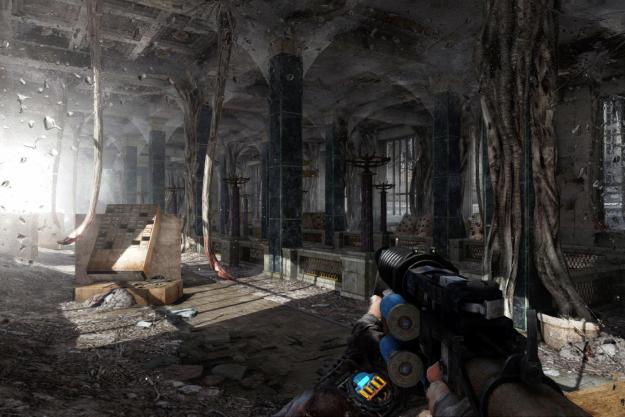 “Metro Redux is the physical realization of 4A Games' impressive, admirable ambition.”

Metro 2033 reeked of zeal and passion when it hit Xbox 360 and PC in 2010. The then-Kiev-based 4A Games made a game that was more than just an adaptation of Dmitry Glukhovsky’s post-apocalyptic science fiction novel. Focusing on propulsive storytelling and world-building through desperate action sequences and smartly drawn scenes of domestic life in the game’s future Moscow underground, Metro felt like a full, living place.

While 4A Games had the yarn-spinning chops of Valve and Bethesda at their absolute best, the team’s technical skill simply couldn’t keep up. On PC, the game was gorgeous but it still played terribly, its body broken in ways that distracted from its beating heart. Metro: Last Light arrived in 2013 addressing all of those mechanical issues with aplomb but it was still somewhat hampered by its predecessor as a direct continuation of 2033‘s story. If you wanted to get the full experience, you still had to wade through the first game’s muddy play.

Metro Redux represents the best possible scenario of a game being remastered and re-released.

Not so anymore. Metro Redux represents the best possible scenario of a game being remastered and re-released, preserving the best aspects of the original and illuminating them through a process of careful refinement. This new package is a physical realization of 4A Games’ impressive, admirable ambition.

Packaged together, Metro Redux is the story of Artyom, a young man living in the Moscow metro system roughly two decades after a nuclear conflict destroys and horrifically irradiates the Earth’s surface. When the story begins, the pig-snouted mutated monsters that roam the surface as well as shadowy psychic beings called Dark Ones are encroaching on Artyom’s home station, Exhibition.

Like all classically styled heroes, Artyom has to leave home and live amongst warring survivors, including Nazis, Reds, bandits, and the benevolent but fiercely militaristic Rangers, all while confronting the specter of the Dark Ones. Last Light, in turn, has Artyom dealing with the aftermath of his journey to the Dark Ones’ colony on the surface, and trying to create a meaningful future for human beings in a world where not only can they barely survive, but where nature is starting to replace them.

Both chapters in Redux succeed in balancing the story’s most absurd and grounded aspects. If there was a nuclear holocaust that destroyed the world, there probably wouldn’t be giant, oozing pig bears and pterodactyl-winged apes flying around the Russian countryside eating people within a generation of the bombs dropping. There probably also wouldn’t be a race of semi-humanoid psychic freaks that look like they escaped the X-Files, and if there were, no one would call them “Dark Ones.” It would make every conversation profoundly silly or at the very least sound like a conversation from a 1980s arcade game.

Only those beastly conflicts feel cartoonish in Redux, though. The rest of the subterranean world feels exaggerated but affectingly plausible all the same. The Moscow underground really was built to serve as a massive, population-saving bomb shelter and the human conflicts within those walls are all to believable. Bullets are as valued as food and clean water for Artyom and his people. Guns define people’s lives, and good or bad, they’re surrounded by violent, gang-affiliated ideologues.

Wandering through Redux‘s towns like Exhibition, or nightmare strongholds like a Nazi-controlled prison, you get glimpses of the people surviving through these endless conflicts, stuck on the brink of death. The contrast between light–a family sitting beside a campfire, listening to someone play guitar–with the darkness of a place where bullets buy everything is complex and real. Blasting slavering monsters is simple in Redux, but nothing involving people is, and that’s a credit to 4A Games’ craft.

That blasting is what elevates Redux so far above its original release, particularly 2033. The Metro games are built as survival games rather than Call of Duty-style shoot ’em ups, which plays into the fiction of bullets being a precious commodity. Military-grade ammunition is too precious to use in conflict and is reserved for bartering, even for homemade machine or shotgun shells. Avoiding conflict through stealth is often preferable to getting into a shootout where you might not have enough ammunition to survive.

In the original Metro 2033, this setup made for a game that was miserable to play. Monster and human enemies alike were practically bulletproof, soaking up shots and quickly moving in to kill you in a heartbeat regardless of how big a stockpile you had. There wasn’t even a devoted melee attack in the Xbox 360 version until a nearly-useless knife option was patched in.

Stealth was encouraged, but avoiding fights was nearly impossible in most sections of the game because it was so hard to determine what alerted those enemies. The AI was also far too precise. Step on a metal grate too quickly, and every Nazi in the area would know exactly where you were.

Metro: Last Light addressed all these problems, streamlining the interface and rebalancing combat to be quicker and more realistically brutal. Enemies no longer absorbed bullets like walking concrete walls. In Redux, 2033 now plays fully like Last Light, making for a far more enjoyable and playable experience. Now when you’re discovered, it’s clear why, and it’s possible to actually escape and regain the advantage in small confrontations.

2033 also looks as good as it plays now. The original Xbox 360 version of the game was by no means ugly, but it wasn’t up to par with the far superior PC version of 2033. A massive touch up of the first game, including the use of environment and art assets from Last Light to rebuild parts of 2033, makes for a profound improvement. Characters, unfortunately, didn’t receive the same treatment. Last Light‘s people look a whole lot more human than the occasionally Uncanny Valley-fied 2033 population.

That’s the biggest criticism that can be leveled against this package, though. Metro 2033 was a game clearly made by a talented team that simply couldn’t make a game that was as engaging to touch as its world was to follow. Last Light found them matured, but missing their crucial first chapter. Now Redux is a single package that elevates 4A Games’ series to championship status, a heavyweight on par with the likes of Wolfenstein: The New Order and Half-Life 2. Now’s the time to head underground.

This game was reviewed on a custom-built gaming PC using a Steam code provided by Deep Silver.