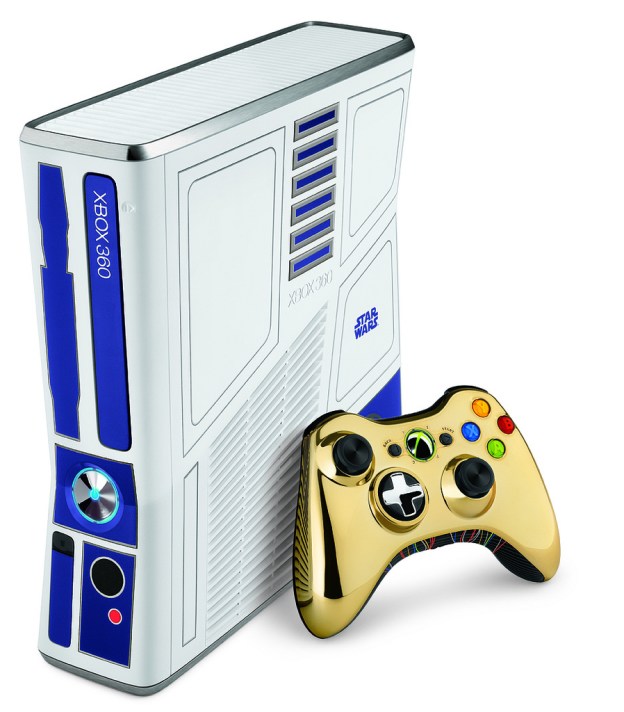 Today at Comic-Con, Microsoft debuted its limited edition Star Wars themed Xbox 360. The console pays homage to R2-D2 while the controller is a tribute to C-3PO.  And there’s more to the set that meets the eye: The astromech droid’s signature sounds will be woven into the console functions. You can take a listen at the previous link.

The unveiling comes hot on the heels of the Kinect Star Wars game, which uses the motion-based gaming technology to give players an immersive Star Wars experience. Developers also said a pod-racing feature will be included in the Kinect game. It’s the closest you’re ever going to get to wielding a light saber or piloting a pod racer.

The limited edition console will go on sale this holiday season for $449.99 and will come packaged with a white Kinect, the Kinect Star Wars, Kinect Adventures, and a 360 wired headset. It runs a 320 GB hard drive as well “exclusive downloadable content,” which Microsoft did not detail.

For more pictures check out our photo gallery on the Star Wars Bundle.

Topics
Xbox Game Pass now runs on more PCs and Surface devices
Xbox September update introduces game library revamp and more
PC Game Pass will now tell you how long it takes to beat games on the service
How to get Xbox Game Pass on Steam Deck
7 video game characters who deserve a Macy’s Thanksgiving Day Parade balloon
The best multiplayer games on Nintendo Switch
The best PS5 headsets
The best Xbox Series X headsets
Save $250 on the Razer Iskur X XL gaming chair for Black Friday
This PS5 controller Black Friday deal drops the price by $20
How to level up weapons fast in Warzone 2.0
10 video games that would make great movies
How to check if your PC meets a game’s system requirements