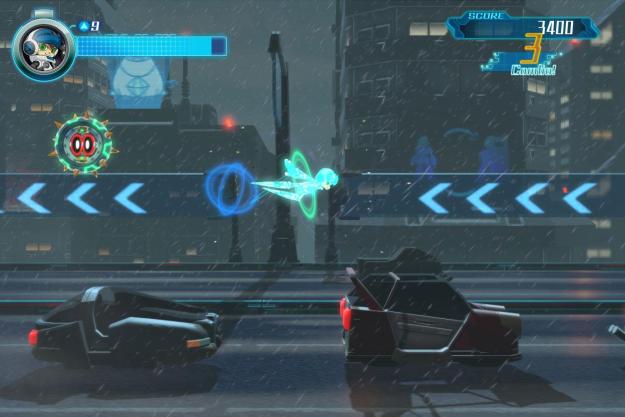 “It raised nearly $4 million on Kickstarter, yet Mighty No. 9 offers little but nostalgia.”

Nostalgia is one of the most powerful economic forces in gaming. Despite the medium’s relative youth, a desire to play the games of our childhood has caused the industry to eat its own tail, It’s like the joke from an old The Onion gag about the U.S. Department of Retro fretting over a rapidly diminishing past for repackaged consumption.

Crowdfunding has hugely amplified this force in gaming, giving fans a direct voice in reviving underserviced genres like adventure games and PC RPGs. One of the most anticipated projects to come out of that initial wave of Kickstarter successes, raising nearly $4 million, is Mighty No. 9, a spiritual successor to the original Mega Man games from the blue bomber’s creator, Keiji Inafune.

Finally released three years after its initial announcement, does Mighty No. 9 live up to the tidal wave of expectations it rode in on? In a word: no.

Been there, done that

If you’ve ever played a Mega Man game, you know the gist of Mighty No. 9. Some mysterious force has corrupted nearly all of the world’s robots, and it’s your job as Beck, the eponymous Mighty No. 9, to forcefully bring them back into the fold.

The action is split across eight levels, which can be played in any order, each climaxing in a boss fight with one of Mighties No. 1 through 8. On defeating each boss, Beck absorbs their power as a new special ability, which in turn makes it easier to beat another boss.

At least, that’s the theory. In practice we found that it was often just as easy, if not sometimes easier, to use Beck’s basic blaster for the vast majority of the time. The special weapons’ underwhelming effects, combined with their energy expenditure, served as a disincentive to use them.

The main mechanical hook that separates Beck from Mega Man is his unlimited dash, which is used to absorb weakened foes, restoring his health and providing other temporary ability boosts. Damage any given enemy sufficiently and they will change colors, becoming vulnerable to absorption. The percentage of an enemy’s “Xel” that Beck absorbs depends on how little time passes between the attack that made them vulnerable and when Beck absorbs them. Chain multiple 100-percent absorptions and you build up a combo multiplier, increasing your score at the level’s final tally.

Beck does little to define himself as anything beyond “not quite Mega Man.”

In theory this encourages you to maintain momentum, continuously pushing forward while felling robots. It’s similar to the glory-kill mechanic in the recent Doom revival, which is a fantastic way for encouraging that game’s aggressive tempo. In practice, though, it never really achieved that parkour-like flow state that you get from fast-paced platformers like Sonic the Hedgehog 2. The level designs are all very linear, so often if you miss a particular window to blaze through a section, you’re left awkwardly waiting for your next opportunity.

A detailed score breakdown and letter grade at the end of each level signal’s the game’s intention for you to complete the same levels over and over again, chasing high scores. But the levels themselves rarely provide enough variety, challenge, or reward to make this an appealing proposition.

Not so easy on the eyes

Uninspired gameplay would be more forgivable if it was wrapped in appealing artwork or charming characters, but Mighty No. 9 is sorely lacking on both counts. The game’s 3D character models are simple in a way that feels unfinished, rather than clean or elegant. A prototype video, released after just a week of work in 2013, actually looks distinctly better than the final product, particularly with regards to lighting and effects.

Beck does little to define himself as anything beyond “not quite Mega Man.” None of the supporting characters leave much of an impression either. Cut scenes between levels are animated within the game’s engine, which leaves no room for facial animations or much in the way of gestures. As with the game’s artwork in general, moving to 3D without the budget or design chops to really finish it ends up making the game feel cheaper than if they had stuck with a more lo-fi 2D style.

On top of that, we experienced a crippling bug while reviewing the game such that it would not save progress between sessions. We were assured by the publisher that this was a rare problem that would be patched out on day one, but given widespread reports of technical issues on many platforms, we would be remiss to not mention it.

None of that is to say that the moment-to-moment gameplay of Mighty No. 9 is bad, per se — but it’s certainly not good, and shows no indication of design evolution since Mega Man’s 90’s heyday. Platformers like Shovel Knight, Super Meat Boy, and Rayman Legends have demonstrated in recent years that the genre still has plenty of life, and that modern flourishes can make these games feel fresh and interesting while still honoring their forebears.

Mighty No. 9 does nothing to elevate the form, instead serving as a nostalgic rehash for nostalgia’s own sake. It’s not egregiously bad, but given the game’s high profile inception and pedigree, it needed to do more than simply whelm. If you’ve played through the entire canon of Mega Man and Mega Man X games so thoroughly that only a new title will scratch your itch, then Mighty No. 9 is a serviceable substitute, but chances are you’re just better off going back to the originals.

Mighty No. 9 was reviewed on Xbox One with a copy provided by the publisher.