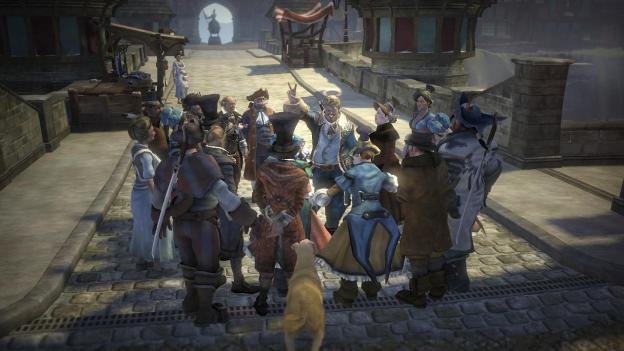 Lionhead Studios today launched a new official forum for the Xbox-exclusive Fable series, sparking speculation that a new Fable game will be revealed during Microsoft’s Xbox One E3 press conference on June 10.

“Have you been longing for a place to hang out with like-minded Fable fans? A place to share your knowledge and passion for the series?” asks a Lionhead blog post announcing the new forum. “Join fans from across the globe to discuss all things Fable; from the latest news & announcements to guides, walkthroughs and fan content.” Those who register for the forum in the next two weeks will receive a special badge for their account.

There’s been plenty of speculation about the next Fable game, including that the follow-up to Fable 3 and Fable: The Journey may be a massively multiplayer online RPG. With the Xbox One’s increased focus on social and online features, that’s certainly a possibility. It also fits with what Microsoft revealed at the unveiling of the Xbox One. Microsoft confirmed that it was currently working on 15 exclusive Xbox One games, eight of which will be original properties. That leaves seven returning franchises. The smart money is on a new Halo and Gears of War entry at some point soon, and Forza Motorsport 5 has already been confirmed. It makes sense that of those five remaining returning properties, one would be part of the Fable franchise.

Topics
E3 2023 returns in June with separate business and consumer days
Wo Long: Fallen Dynasty has a new demo. Here’s where and when you can play it
Deathloop comes to Xbox and Game Pass next week with Goldenloop update
Metal: Hellsinger headlines Xbox Game Pass’ September lineup
‘Wordle’ today, December 8: Answer, hints, and help for word of the day (#537)
The best Nintendo Switch exclusives of 2022: 9 standouts from the console’s banner year
The best live service games of 2022: 10 ongoing games we couldn’t stop playing
Save $59 on the Xbox Series S, with delivery by December 24
Marvel’s Midnight Suns hero guide: every hero explained and ranked
How to order the PS5 (with disc drive) for delivery by December 24
The best places to land in Fortnite for Chapter 4
The Game Awards 2022: how to watch and what to expect
How to win a free Steam Deck during The Game Awards 2022