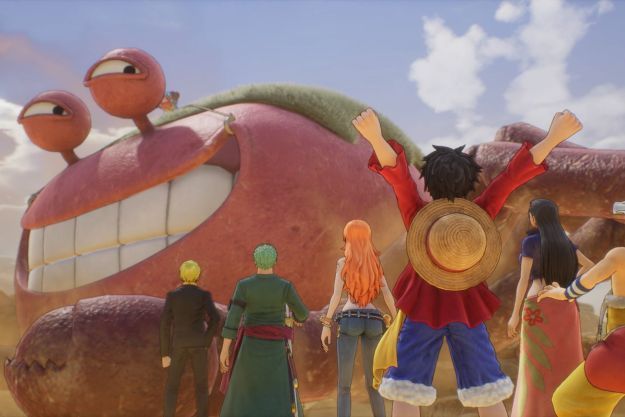 One Piece Odyssey review: A fun JRPG for fans and newcomers
Score Details

“One Piece Odyssey is an anime spinoff JRPG that's a cut above the rest.”

When I began my adventure with the Straw Hat Pirate crew in One Piece Odyssey, I was taken aback by the beautiful virtual world in front of me. I felt like I was sucked into the pages of the manga I’m such a big fan of, complete with wacky creature designs, awesome choreography, and tons of character humor and drama. By the end of the adventure, I was excited that One Piece finally had a JRPG on par with Dragon Quest.

One Piece Odyssey is a new Japanese role-playing game spinoff of the hugely popular manga and anime series. While it has a rough start, One Piece Odyssey isn’t a quick cash grab based on IP power — it’s a full-fledged JRPG that looks to push One Piece to new gaming heights with its superb style, storytelling, characters, and twists.

One Piece Odyssey‘s leading characters are the Straw Hat Pirates, a motley crew of oddballs chasing their dreams with the goal of finding the treasure called “One Piece.” The team crash-lands on the mysterious island of Waford after being bombarded by a wild storm and tangible lightning. The team quickly learns that this island is more than meets the eye when they come in contact with a giant fire guardian, and their abilities are scattered around Waford in the form of memory cubes. The team adventures around Waford and through those scattered memories, which recount moments from the One Piece manga and anime, to get back to full strength. Meanwhile, the corrupt government leaders of the One Piece world, the Four Elders, have sent an operative to the island to intercept the Straw Hats.

The story is a rather entertaining one thanks to the solid character, plot, and world-building. As a One Piece fan, this game felt like an extension of some of my favorite stories from the franchise, as it let me explore them in a new way. There are tons of little lore bits that fans of the series will greatly enjoy. I’d engage with every interactable thing on the screen just to see what new info I could learn. Still, this plot features many flashbacks that give new players the details of characters and arcs that are important to this road down memory lane.

Overall, One Piece Odyssey hits a healthy medium of new and old territory, allowing anyone to jump in and enjoy it in terms of its plot. And thankfully, its twists, small nods, excellent characters that are easy to understand, and several epic moments help bring the narrative together. It’s a very good plot for a JRPG.

If it ain’t broke, add to it

If there’s one JRPG series I could compare One Piece Odyssey to, it’s Dragon Quest. This isn’t just due to its aesthetics and the weird and hilariously unique monsters, but the entire structure of the game. One Piece Odyssey is a very straightforward role-playing game. You go from point to point while taking the usual detours you expect from genre mainstays like Dragon Quest and move the plot along while partaking in a bit of exploring. While this may sound more basic than titles like Tales of Arise, Final Fantasy 7 Remake, and Scarlet Nexus, it isn’t bad at all.

As seen in Dragon Quest XI: Echoes of an Elusive Age, sometimes less is more, and that works in One Piece Odyssey’s favor. This is the type of game you’ll want to boot up after a day of hard work, as it’ll let you relax and enjoy a few hours in One Piece’s world.

You can swap between the Straw Hats and use their different abilities to travel between areas and bypass roadblocks. Captain Luffy can use his rubber powers to conquer light platforming elements by making his arm into a makeshift hook shot, for example. The shapeshifting reindeer, Chopper, is small enough to walk in tight crevices and reach secret areas. And the beautiful archaeologist, Nico Robin, can destroy obstacles in the way. These moments of adventure are made even more alive with the party constantly chatting back and forth. The simple and distinctive philosophy of exploration is carried into combat as well.

Fights in One Piece Odyssey are broken up into multiple Attack Areas, and you’re allowed to swap party members in and out of them at will. This sometimes makes it as if you’re fighting multiple battles at once. These areas can also constantly change during a battle, whether it’s due to an enemy or your actions. For example, Luffy can use his Gum Gum Bazooka attack to knock opponents to other party member areas, and many times the party member in that Attack Area will have a hilarious reaction to it.

Another great thing about One Piece Odyssey is that grinding is a no-issue. While the choice is there, there are tons of ways to level up quickly. You can have a celebratory party (in typical Straw Hat fashion) and get bonus experience in the following battles, or you can seek out specific enemies that give experience bonuses. You also have access to tons of buff and debuff items that you can utilize to beat strong enemies to gaint more levels. While there’s a lot of good aspects pushing One Piece Odyssey to great heights, it’s held back by some wrong turns on the way to the grand treasure it could be.

There are a few holes in this ship

While I liked the game’s first chapter, after that, the early parts of the game soured my experience. Not only is One Piece Odyssey very slow, chatty, and hand-holdy earlier on, but it leaves the impression that the game is going to be way too easy. As the Straw Hats land on the island at full power, it’s natural that they’ll one-shot every enemy they come in contact with. So at the start, I mindlessly mash attacked through battles, hoping I was finally going to hit that difficulty curve thawould finally appear in Chapter 2 when the main plot beats begin.

Unfortunately, the game never finds the right difficulty pacing after that, with battles randomly being harder in a way that doesn’t scale smoothly. It doesn’t help that fights become somewhat repetitive once you’ve done a lot of them. In general, pacing is a big issue for One Piece Odyssey. There are tons of moments where you can tell that the devs are biding time with pointless filler missions that send you back to previous areas. These moments don’t add anything to the plot or gameplay and just end up signaling that it might be time to take a break. Throw in some unnecessary dialogue moments from NPC characters, and the padding is felt from a mile away.

One Piece Odyssey isn’t the most perfect adventure, but it is a grand one that plays to its strengths. It sets out to be a journey that anyone can enjoy, and achieves it by embracing well-established formulas while adding its own flavor into the mix. While there are a few bad winds pushing the ship away from the harbor of being a perfect experience, this is an excellent addition to the JRPG genre and one that I think you should try out whether you’re a big One Piece fan or just an appreciator of JRPGs.

Topics
Mortal Kombat is getting a mobile ‘team-based collection RPG’
How to improve battery life on OneXplayer Mini
What games can you play on OneXplayer Mini?
OneXplayer Mini: Tips to optimize your handheld PC
The best iPhone games in 2023: 31 games you need to play right now
I can’t believe I’m recommending Forspoken on PS5 over PC
Redfall’s May 2 release date revealed during Developer_Direct
The best Fire Emblem games, ranked from best to worst
Xbox just surprise announced and released a stylish new Game Pass title
The Elder Scrolls Online’s 2023 updates bring players back to Morrowind
How to cheat in Words With Friends
Shoulders of Giants brings mascot-era nostalgia to the roguelite genre
The best PSVR games for 2023