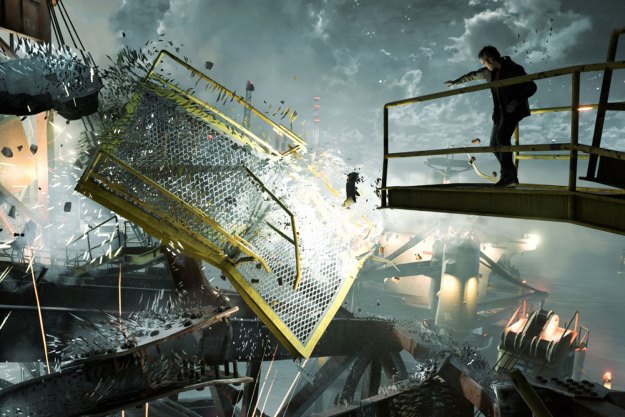 “Quantum Break tries to master video game and TV storytelling, but fails at both.”

Quantum Break is, if nothing else, ambitious. The Microsoft-exclusive TV/video game hybrid from developer Remedy Entertainment seeks to apply the kind of ensemble narrative structure seen on shows like Game of Thrones or House of Cards to an interactive story. To achieve this, the show alternates between multi-hour stretches of third-person cover-based shooter gameplay and 20-30 minute live-action “TV episodes,” which change depending on a set of key decisions you make throughout the game.

Break was a flagship component of Microsoft’s media-centric launch strategy for the Xbox One, which would position the console as a replacement cable box and place Microsoft as a streaming content purveyor competing with Netflix, Hulu, and Amazon. Those plans died, but Quantum Break did not die with them. When Microsoft shuttered its original content division, Break survived, but went from an ambitious selling point to a vestigial game/TV experiment.

You alternate between playing a traditional video game and watching live-action TV “episodes.” Though it was game first, the show was set to impress even mainstream TV viewers, with a cast TV fans will recognize from shows such as Lost, True Blood, Fringe, and Killjoys. Decisions made in key moments of the game directly influence the events of the show.

It’s bold. It’s exciting. It’s original. And it also fails in its primary goal, to tell a meaningful story.

Quantum Break is a beautifully broken experiment, in the tradition of games like Sega’s Alpha Protocol, and Deadly Premonition, which proves that someone might be able to successfully blend TV and games to make a single story, but doesn’t actually get the job done on its own.

A break in time, and logic

You control vagabond Jack Joyce — played by X-Men actor Shawn Ashmore — returns to his hometown of Southport after years abroad at the behest of his childhood friend Paul Serene (a wrinkle-free version of Aidan “Littlefinger” Gillen). Paul’s company, Monarch Solution, has funded a secret experiment based on research by Jack’s brother Will. (Hint: It’s a time machine.) When Jack and Paul test the machine, they create a fracture in time, which causes it to stop and start in “quantum stutters,” which increase in length and frequency until they cause time to stop and never starts again.

Despite its many failings, it’s still possible to see the incredible idea at the core of Quantum Break.

Shortly after, Paul steals the time machine and reveals that his company has known that the fracture would occur and has engaged in a massive conspiracy to prepare for the end of time. As a result, Jack is the only person with the knowledge and means to potentially fix time.

What makes Jack so special? After the experiment with the time machine, Jack becomes “chronon-enabled,” which is a fancy term for “having time powers.” Jack (and other chronon-enabled characters) don’t stop during Quantum stutters. He also has a set of power to stop time, or reverse it in isolated spots. This opens up an array of puzzle- and combat-friendly abilities, including the ability to shoot bubbles that stop time in isolated spots, stop time in the immediate area around him to make a “time shield,” and dash across a room in a millisecond. (By the end of the game, he learns to do some other things that don’t make a lick of sense, like throw time explosions.)

The game follows a rigid act-based structure. First, you control Jack through a multi-part chapter.

For better or worse, Jack’s time control abilities are the only novel component of what is an otherwise rote and, frankly, unrefined cover-based shooter. Jack moves from arena to arena taking down waves of Monarch paramilitary soldiers. Given the hundreds of shooters that have been released, its shocking how unsatisfying the gunplay is in this game. The aim is sluggish, and the enemies are exceedingly spongey. Luckily for players, these issues are negated by Jack’s powers, which make even overwhelming numbers of enemies manageable. Between the aforementioned shield, which can stop an infinite number of bullets, and the ability to slow time directly after a “time dash,” experienced shooter fans will be able to waltz through most fights picking off enemies one by one.

Make sure to read the fine print

Outside of combat, you’ll spend most of Quantum Break scouring the environment for optional-but-basically-mandatory collectibles. Each level has dozens of pick-ups, including your standard extra-narrative “lore” text, upgrade points, “Quantum Ripples,” which add extra dialogue to subsequent live-action episodes, and “Intel” items, which unlock video diaries in the game’s menu.

While there’s no penalty for skipping them, the reading material actually winds up being pretty important. Character backstories and some of the game’s most important plot points are explained and revealed in the corporate emails between Monarch employees. The narrative would be just short of incomprehensible without them.

It’s bold. It’s exciting. It’s original. And it also fails in its primary goal, to tell a meaningful story.

For an experimental, dual-medium narrative-driven experience, Quantum Break doesn’t concern itself much telling a story. Jack’s adventure follows the most basic of action-movie arc with a couple of time travel twists thrown in for flair. Most of story’s detail comes through in those “optional” narrative readings: The notes, when you find them, slowly piece together a long and winding series of events, conspiracies within conspiracies, that connect to the sequence when the game begins, but never fully integrate into Jack’s story. It’s almost graceful how the story around unfolds around Jack without necessarily affecting him or his goals in any way.

The real story of Quantum Break, which exists in those notes, applies more directly to the live-action show, a separate parallel political drama revolving around Serene and some of his employees from Monarch. The four 20-30 minute episodes explain a lot more about what’s “going on” as time comes unraveled.

A TV show that can’t stand on its own

The notion that the show changes based on the events of the game is a bit of a misnomer. Rather than basing how episodes play out on in-game conversations or other narrative interactions within the game’s chapters, you effectively pick what episode you want to watch based on a brief narrative aside after each game chapter called a Junction Point. In the Junction Points, you switch control to Paul just along enough to make an important tactical decision related to his plan.

While some of the choices from the junction points carry weight — In an early junction point, Paul effectively decides whether or not to kill a supporting character — the decisions ultimately amount to background changes that affect the story in relative minor ways.

Unfortunately, while providing insight into the vague narrative of the game, the show doesn’t hold up on its own merits. The “show” characters, who are eventually thrown into the story of the game, but whose importance are really propped up because of the split-narrative, feel more like vehicles for exposition than actual people. Aside from some cursory motivations, the episodes move at a 24-style non-stop pace to keep up with the gulf of time spent in-game. Where many TV shows wind up contradicting their characters defining characteristic if stay on the air for many seasons, Quantum Break manages to undo its some of its characters’ core personality traits in just a few episodes.

A mashup that just doesn’t work

The game can barely hold the weight of its narrative. Every plot point elicits at least one head-scratching question, whether it’s the “how” and “why” of the game’s all-important MacGuffin, or how a certain character fits into the story. It’s possible to miss some of these details in the narrative readings, and there are some details that you may or may not get based on your choices in the game’s all-important junction points, but that doesn’t excuse the fact that there will some of you who play this game and fail to ever understand it.

Despite its many failings, it’s still possible to see the incredible idea at the core of Quantum Break. Imagine a new Game of Thrones next season, but where you pick up a controller for all of Jon Snow’s scenes. (Don’t pretend like there won’t be.) Comparing the game to that specific hypothetical, Quantum Break may have set itself up for failure from the beginning. Maybe the TV show should be the “primary” storytelling medium instead of the game? Either way, Break never hits the right balance.

While its impossible to recommend you play this experiment of a game it in good conscience, I’m still looking forward to Quantum Break 2, or whatever game/show tries to crack the formula next.

Topics
Over 100 PlayStation VR2 games are in development, Sony says
How to use PS5 voice commands
Every video game delay that has happened in 2023 so far
Forspoken settings: change these settings for a better experience
Best Gaming PC Deals: Save on RTX 3070, 3080, 3090 PCs
The best video game remakes reinvent the classics, they don’t just revisit them
Best Buy will give you a $10 to pre-order Hogwarts Legacy today
Save $620 on this Lenovo gaming laptop with an RTX 3070
AMD vs. Intel: which wins in 2023?
Add 2TB of storage to your PS5 with an SSD and save $70 with this deal
Fall Out Boy concert in Fortnite: start time, island code, and more
Marvel Snap is dangerously close to becoming a pay-to-win game
All missable characters in Fire Emblem Engage and how to get them