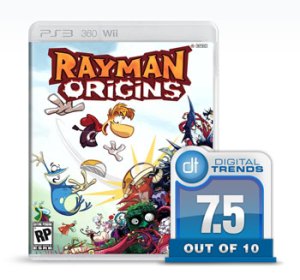 For the last few years Rayman has taken a back seat to Raving Rabbids. The spin-off series which features Rayman is a ton of fun for a mini-game collection, but the games aren’t really about our limbless friend. Mostly, they focus on the mad antics of the space-faring Rabbids.

Fortunately, Ubisoft didn’t forget about the little guy and gave us Rayman: Origins. It’s the first full Rayman game since 2005’s Rayman: Hoodlums Revenge which was released for the Nintendo DS. That’s kind of crazy considering that Rayman has been platforming since back in 1995 when he got his start on the original PlayStation. In Origins, Rayman returns to his 2D platforming ways and brings some old friends along with him. It’s a welcome bit of fun, and the world is immersive and silly, though the game does suffer from some repetitiveness and old-school frustrations.

One of the newest additions is drop-in/drop-out co-op play. Ubisoft added up to four-player co-op for Rayman’s return and its a nice feature but it’s doubtful that fans of the series will really dig into the co-op modes.

In the Way back Machine

The game bills itself as an origin story for Rayman and his friends Globox and the Teensies. Honestly, the story is completely forgettable and if you’re like me, you’ll probably forget why you’re running around killing baddies. You’re forgiven if you play Origins and find it ironic that it doesn’t seem like much of an origin story.

What story there is though, if fairly cute and ridiculous. Rayman and his friends are sleeping when Globox’s snoring annoys and angers a little ol’ granny in the underworld. Eventually she releases a stream of the Livid Undead and darktoons to take over the Glade of Dreams. Rayman and friends set out to save the Glade and return it back to normal. During gameplay you can switch between playing Rayman, Globox or one of the Teensies, and there are several costumes for each that are unlocked as you collect Electoons during the game.

If you’ve ever played a Rayman game you’ve probably got an idea of what to expect. Rayman uses his limbs-free extremities to kick, slap and jump onto to the various enemies in the game. What’s nice about killing the bad guys in Origins is that they turn into bubbles when you hit them. Then to get the reward for hitting them you need to pop their bubble, which will give you a couple of lums–the Rayman version of coins or rings. It adds a bit of gameplay to a familiar formula.

As you progress through the game, basic abilities are earned like the ability swim, hover-fly, sprint and wall-run. As the game progress yo will need to utilize these new abilities in order to make it through some of the challenges you will face. It is nice that the game actually forces you to use the various abilities in the levels after you’ve earned them and makes the game’s pacing especially tight.

As mentioned above, you can play any level as Rayman, Globox or one of the two Teensies. While the option is nice in single player, it’s not really necessary. For the most part the four characters all feel the same and do essentially the same things. The Teensies shoot out a force-field instead of slapping enemies, and Globox seems to be a slight bit more destructive when crushing enemies, but that’s about it. The extra costumes don’t add anything special, but they are a fun diversion for you to unlock. The setup is actually very similar to the newest offering of another long running platforming series, Ratchet & Clank: All 4 One.

With over 60 levels spread across 12 different realms, this game is surprisingly long. Generally, after beating a level, you haven’t really beat it. You can return to get more lums which gives you medals and more electoons to unlock levels and costumes, which adds even more to the replay value. You can also jump in to try and beat the speed runs if you are looking for something more.

Despite the originality and variety, it does get repetitive at times. For the most part you’re just 2D platform-running through levels ’til the end. It’s a tried and true formula that can feel old to veteran gamers and, it’s probably best to stay away from marathon gaming sessions with this one. It’s better as a nice little relaxer between the heavier games that you’re playing. For younger gamers, or people looking for something a bit calmer than many of the current games being released, this may be a better fit though.

One thing I noticed as I played was that the game felt refreshingly old school. This came from the fact that were several levels where I died repeatedly until I was able to memorize the route that I needed to take to beat it. At times this was throw-the-controller frustrating, but it did make me feel somewhat nostalgic for my days on the Super Nintendo and Genesis. You can take that for what you will but I found it enjoyable. Of course, it does help that saving the Electoons at the end of levels feels like a nice Sonic callback.

The co-op mode allows up to four players to run rough-shod through the levels, but it doesn’t really add anything in and of itself. That doesn’t mean the co-op is bad, just that it will be what you make of it. If you and your friends are looking for a co-op game, you could do worse, but it will be fun more because it is with your friends than because of the game. In the co-op play, if one of the players dies or falls behind, they become bubbles that float after the others–which is kind of funny and ensures that slower players, or the occasional mistake, won’t break the flow. Players can drop in and out of the levels as they like, which is also a nice feature. Still, it doesn’t add much to the game and probably won’t see a lot of use. It’s more fun to just pass the controller back and forth.

The enemies and the world are delightfully silly, and some of them may look like rehashes of ideas you’ve seen in the past like the “Gourmet Food” world. What makes it all work is the cartoony art style that Origins has, and the amazingly fun background music. Most of it feels like an odd cartoon jazz compilation that was enjoyable to listen to while bouncing around the levels.

Traveling the world has a Super Mario World feel, in that you follow a map to various buttons and jump into them to play the next level or go to the next realm. There’s not a lot originality in that, but that actually added to the enjoyment of the game. It is familiarity (and perhaps some nostalgia) wrapped in a goofy package.

Rayman Origins is game that plays well with nostalgia. It brings back a beloved PSOne mainstay and builds on previous 2D side-scrolling platforming adventures like Sonic and Mario. Perhaps that seems like a knock against it, but the lack of originality in the game doesn’t make it any less fun.

The art style of the game is cartoony and goofy which adds to the childish fun. The game can get repetitive at times and some of the levels are frustratingly hard for stupid reasons, but that actually adds to the mentioned nostalgia. Unfortunately, the co-op is pretty forgettable and doesn’t really add anything to the game that you won’t bring to it yourself.

Grab a copy of Rayman Origins if you want something light to snack on between the heavier meals that the monster holiday 2011 season is offering. There’s a lot of game to dig through and the gameplay is fun enough to carry it.